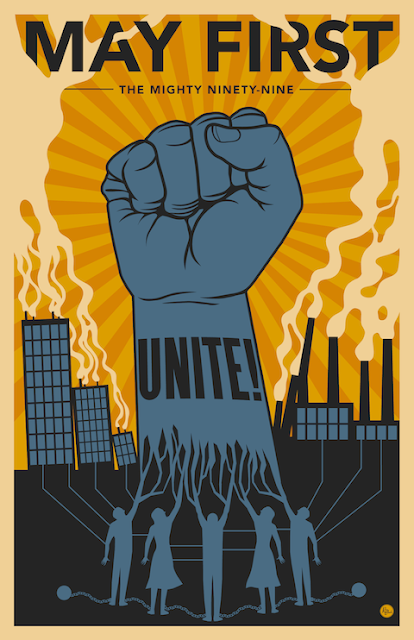 A strike call without demands may mobilize those already in our camp, but a program is required to drive a wedge between the union leaders (who drive the workers to the Democratic Party campaign) and the rank and file, who are looking for real answers to declining wages; attacks on defined benefits; increased costs of medical insurance; declining educational resources; the lack of jobs for our youth; the mass incarceration of black and brown young men; the ongoing foreclosures; the ICE and La Migra attacks on our immigrant brothers and sisters; the imperialist wars and ongoing war drive run by the Democratic leadership, and the climate change catastrophe.

An action without demands will not lead the the masses into sustained action leading to victory.  What is required is mass assemblies to debate and set a program for the May Day action.  We must answer: How to run an economy to provide for the needs of all?

1) How to provide jobs for all?  Massive public works program to rebuild infrastructure.  Provide work for all who are willing and able.  Implement 30 hours work for 40 hours pay.  Any company which cannot comply should be nationalized without compensation to the big shareholders, and run under workers' control.

2) How to provide education for all?  Make education free!  Seize all private educational institutions, seize all charter schools, and open them to the public. Defeat "race for the slop" and "no child left alive"!  Remove the regents, school boards, and similar bodies, and administer the institutions by the democratic assembly of students, educators, workers and community members.

4) How to take back our unions and labor councils?  Form up rank and file caucuses to create action committees in every workplace, with a unity program to unite the entire working class in the union movement in a drive to replace the class collaborators who misdirect the labor movement into the Democratic Party and support "Share the Pain" and other  give-back campaigns.

5) How to  provide health care for all?  Expropriate the assets of the entire for-profit health care industry, including the insurance companies, the for-profit hospitals, and the drug industry, and place them under workers 'control.

6) How to feed the people?  Seize the big agra businesses, end petroleum based production! Put billions into organic farming practices to clean the land and the water and promote healthy, sustainable food production. Apply public resources to build local gardens to feed the communities and put youth and unemployed to paid work growing our own food.

7) How to protect our immigrant brothers and sisters?  Form up labor/black/brown self defense guards to disarm the fascists, ICE, and La Migra, and unite the working class to fight for full citizenship rights for immigrants. Same boss and same job means same union and same contract, across all borders!

9) How to defeat Wall Street's ongoing imperialist war drive and exploitation around the world?  Massive indefinite general strikes will be needed to unite American workers with the people of the world to defeat the ongoing imperialist wars (Iraq, Afghanistan, Pakistan), stop the threatened attack on Iran, and call a halt to the the hundreds of ongoing covert actions by the CIA around the world, which are aimed at defeating the people and making their countries safe for imperialist exploitation.

These are only suggestions for the type of program Occupy needs to employ to break out of its stagnation; prevent it from being co-opted by the likes of Move On, SEIU's Mary Kay Henry, and Michael Moore; and subvert the dominant paradigm that drives the masses back toward the capitalists' fake solutions offered by their electoral process.

The general strike offers solutions only if we take it to the end - and that end is workers' power!
Posted by Dave Brown at 2:12 PM