WIVL statement on the police brutality against working class protests 28.07.09 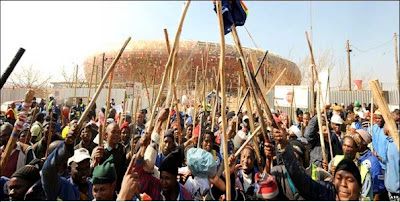 Workers International Vanguard League condemns in the strongest possible terms the police brutality against the workers’ strikes, against the struggles of the unemployed for food, jobs and a living benefit, against the working class in communities for decent housing and basic services.

The coup in Honduras 4 weeks ago, the killing of over 4 million people in the DRC since 1996,the Gaza massacre of December-January, the massacres of the rural working class in Peru, the deliberate starvation of the Zimbabwean working class over the past few years, and the increased police brutality against the working class protests in South Africa recently, are all connected by one common thread: Imperialism-capitalism is in such crisis that its usual forms of political control is not sufficient to control the masses. Increasingly, brute force is required to contain and smash the resistance of the working class.

In the past there was some semblance of political separation of the SACP and Cosatu leaders, when the state attacked workers. Now the ANC-SACP-Cosatu leaders act as a unit. The true nature of the ANC-SACP-Cosatu Popular front becomes clearer for all to see: the leaders of this alliance are the willing partners and agents of monopoly capital to suppress their own constituency. The crisis of capitalism is so deep that imperialism needs all their forces to act together against the working class- they can offer no solution, or even partial solution to the masses, so the only road left for them is to attack the masses.

The Cosatu leaders label the masses as criminal, yet they are the ones who are criminal: they failed to fight the 34% electricity price increase; they failed to fight high food prices; they bound millions of workers into multi-year agreements that cut workers real wages so that the imperialists could continue with super-profits; they failed to fight unemployment. Now they want to offer fake ‘nationalisations’ like Obama does to the workers of General Motors [Obama bailed out the banks like JP Morgan Chase and Citibank; stole the workers pensions, and still tens of thousands of workers were retrenched/dismissed]. The workers of Zambia are still paying for the fake nationalization of the copper mines decades ago, where only Anglo American benefited. ‘Nationalization’ under bosses control is nothing but a bailout of the US Wall street banks that control the SA economy. What is needed is expropriation of all imperialist assets, under workers’ control!

What is needed is for the municipal, chemical, transport and other strikers to form joint action committees with the unemployed, with the farm workers and with communities in struggle. Call an urgent national meeting of employed workers, unemployed and farmworkers delegates to co-ordinate the fight for wages, jobs, food, decent housing and unemployed benefits. Throw out the sellout Cosatu leaders who act as the voice of the bosses in the workers movement, and who are plotting every day how to betray workers’ struggles. Break the alliance with the ANC and SACP!

The fight against the local capitalist agents is the same fight that workers are facing around the world. Now is the time for an urgent regroupment of revolutionaries in a new Zimmerwald/Keinthal, to co-ordinate working class defence against the capitalist-imperialist onslaught, and to begin the counter-offensive.