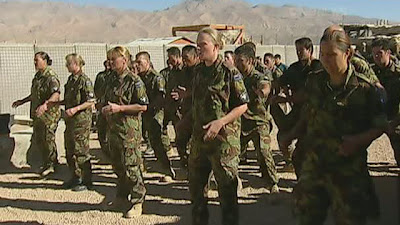 New Zealand is one of US imperialism's client states that trades the lives of its troops for favored business deals with the US. It is about to heed the call from Obama to send 70 SAS troops to Afghanistan. Obama, NATO, Australia etc., and now John Key, the NZ Prime Minister, all claim that the war in Afghanistan is necessary to defeat Al Qaeda and the Taliban and stop them from breeding new generations of 'terrorists'.

This is a lie. This war is a proxy imperialist war for oil and gas, part of the US fight to get control of the vast oil and gas reserves of Central Asia. The Taliban are not "terrorists" but nationalists fighting for their independence. The Karzai US puppet government controls little more than Kabul, and even then Kabul is under constant rocket and suicide bomber attacks. What is more, Karzai is just another ruthless warlord making deals with the ethnic rivals of the Pashtun. This includes passing a law which allows men to rape their wives in the Shia minority. Thus the idea that Karzai represents ‘western democracy’ against the ‘barbaric Taliban’ is another huge lie.

We say that the imperialists have no business in Afghanistan. They should keep their nose out of Afghanistan's business. The Taliban are mainly a Pashtun tribal people fighting for their national independence after centuries of 'Western' invasions and occupations. They always defeated imperialism in the past and they are about to defeat it again. We are for the defeat of the invaders and occupiers! This includes the so-called non-combatant Engineers (Reconstruction Team) whose presence in Afghanistan building schools and hospitals bolsters the legitimacy of the puppet Karzai regime. Unlike the reformist left that calls for ‘peacekeepers’ and reconstruction teams we are for the defeat of all kinds of imperialist invaders including the NZ Engineers and UN personnel.

We are for the victory of the Taliban!

We say this because while the Taliban are a reactionary national bourgeois faction only interested in profiting from its control of Afghanistan and the exploitation of its workers, we support it in its fight against imperialism. However reactionary the Taliban is in its social attitudes towards women, towards secularism, and towards democratic rights, imperialism, even the so-called 'democratic' imperialism of Obama, is 1000 times worse. Why? Because whatever the Taliban is today, this is the result of centuries of imperialist wars, invasions and oppression. Only by defeating imperialism will the popular masses of Afghanistan be able to rid itself of its main enemy, imperialism, and overthrow the reactionary Taliban leadership.

To win this struggle is it necessary for the workers and poor peasants to unite against imperialism and their tribal warlords. These warlords all want to be junior partners with one or other imperialist power. The Taliban control the opium trade (90% of the worlds supply) in collaboration with drug lords and drug multinationals. The Hazaras and Uzbeks have done deals with the US and Karzai against the Taliban. None of the warlords of these ethnic groups will break with imperialism. Only workers and poor peasants united behind a revolutionary communist party can defeat imperialism and open the road to socialism.

Hands off Afghanistan! Hands off Pakistan!
End the national debt!
Expropriate imperialist and capitalist property!
Opium trade under workers (producers) collective control!
Oil & gas under workers control!
For the right to self-determination of all ethnic groups not only the Taliban!
For a revolutionary communist party independent of imperialism and nationalist or religious leaders!
For a Workers and Peasants Government and a socialist Afghanistan!
For a federation of socialist republics of the Middle East and Central Asia!

The Stakes for Imperialism

The fact is however, that US imperialism needs to win this war to ensure its ongoing world dominance. It has used NATO to breakup Yugoslavia and create is protectorate Kosovo. It was behind the Georgia attack on South Ossetia and Abkhazia. It plans to break up the former Soviet territory in the Caucasus and in the Caspian region. The US plans to “Balkanise” the Caucasus by splitting off breakaway ethnic groups.

Without control of Afghanistan the US will not win the “great game” (as the wars for oil in this region were called in the early 20th century). It will not gain military dominance of this former Soviet Union sphere of interest and break the hold of Russia and China on the energy resources of Central Asia. Russia has retained many of the former soviet republics as part of the CIS. It retains its nuclear arsenal and missile defence system. It has formed the CSTO (Central Security Treaty Organisation) with Belarus, Kazakhstan, Kyrgyzstan, Tajikistan and Uzbekistan. It still dominates the production and distribution of oil and gas in the region. China has joined with Russia in the (SCO) Shanghai Cooperation Organisation to protect Central Asia as a joint sphere of interest. The differences between Russia and China over who will ultimately control the region have been temporarily sidelined in the interests of presenting a united front to the US bloc.

So what is shaping up here is not a war against terror, but a war of terror - the start of a terrible escalation of regional wars into a global war against Russia and China that will inevitably run the risk of nuclear war. NZ is clearly joining the military bloc on one side of this escalation by sending combat troops to Afghanistan. Why is this? The NZ finance capitalists want to share in the plunder of the prize of Central Asian oil and gas.

The Prize of Central Asia

What is a stake in Central Asia and the Caucasus is around half the world’s natural gas reserves. The US has won control of Iraqi oilfields from its imperialist rivals. Afghanistan is a key country to control oil routes from the Caucasus and the Central Asian partners of Russia and China. China has oil interests in Iran and in Azerbaijan and Tajikistan. The US plan is to break up the SCO and Russia and China’s sphere of interest in Eurasia. US attacks on Pakistan puts pressure on both Iran and India which are associated with the SCO.

Critical to achieving this plan is control of Iran. Iran is today at the center of the zone of conflict between the two power blocs. Germany, Russia and China continue to trade with and invest in Iran while the US, France and Britain are imposing UN economic sanctions on Iran to stop it from developing nuclear weapons. Obama wants to regain control of Iran and is holding out the olive branch to Iran with one hand, while at the same time using the threat of Israeli bombs with the other. The US ruling class is torn between destabilizing the Islamic regime and risking a revolution in Iran which would spread to the whole Middle East. If it can break up the Caucasus, weaken Russia and China, and surround Iran, without sparking revolution, then it would be able to dominate and plunder the whole of the Middle East and Central Asia. NZ finance capital has backed what it sees as the victorious US bloc. Why?

NZ is clearly a minor semi-colony whose plunge down the OECD pecking order reflects its dire economic decline. The policy of the Labour Government reflected the interests of the weak NZ bourgeois fraction of productive capital that sought to do business with both US imperialism and the China/Russia bloc – its so-called ‘multilateralism’. It sent the SAS to Afghanistan in 2001 under the UN sanctioned "war on terror" but replaced them in 2005 with Engineers to build schools and other public utilities.

The National party represents that fraction of the NZ bourgeoisie that is aligned to international finance capital parasitic on productive capital. The National regime under John Key is signaling the desperation of that fraction of the NZ ruling class that is allied to the parasites of Wall St. Its class interests are to share in the profits of the plunder of productive resources of the world by backing US imperialism against the rise of China and Russia.

In NZ Key's "change" policy in NZ is to solve the crisis by making the workers pay for it. This means cutting wages jobs and taxes to capital to encourage foreign investment. It plans to privatize remaining state assets. It plans to bulldoze this rightwing economic policy through using the neo-liberal shock tactics of the 1980s and 1990s.

Thus NZ is committing itself as a subservient client state of US imperialism both as a source of superprofits and as a mercenary military force in imperialist wars. The NZ lackey bourgeoisie expect to get a dividend from the blood of Kiwi soldiers (a majority are Maori from the working class) sold to their imperialist masters.

No NZ troops, construction teams or ‘peacekeepers’ to Afghanistan!
Mobilize working class action, strikes and blockades to stop NZ troops fighting in imperialist wars!
NZ out of all imperialist alliances!

For workers to live, capitalism must die!

In the epoch of imperialism, each global crisis such as we face today, brings with it the threat of war, and as a result revolution and counter-revolution. These wars are inevitable as each imperialist power or bloc of powers must defeat its rival to grab its territory and resources. Imperialist powers have no other course as they can only survive at the expense of defeating their rivals. Iraq, Afghanistan and Pakistan are wars for oil that can only be explained as proxy inter-imperialist wars with the potential to blow up into a global war.

Such wars, however, involve the working class on one side or the other using them as cannon fodder and exposing them to terror, starvation or genocide. If imperialist wars are not stopped by us workers turning our guns on our own ruling classes, then our fate will be counter-revolutionary defeats, the decline into generalized barbarism. Today facing the crisis of global warming caused by imperialist super-exploitation of the globe, this could mean the destruction of nature and the planet.

However, if the working class can organize internationally and stop imperialist wars by overthrowing their ruling classes, then such wars will not lead to counter-revolutionary defeats for workers. They will spark insurrections, a world revolution, the expropriation of the property of the ruling class, and open the road to international socialism and to the end of the destruction and barbarism of capitalist imperialism.