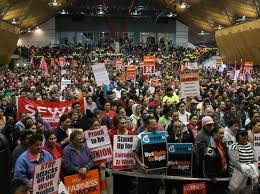 Already NZ, Singapore, Chile have set up and signed off what they called the Trans Pacific Partnership Agreement (TPPA). Now the USA has moved to join and fast-track this agreement. John Key is overjoyed with the promise of blood for butter. What is behind the US deals with these Pacific nations, and what of the opposition to the TPPA? How do we organise a working class solution to US imperialist trade war?

It is significant that the USA is joining in the discussion. As the world's largest economy the US needs to protect its interests. We predict that the USA would try to use the TPPA to contain the expanding imperialist force that is China. Since China has emerged from the cold-war and used party control of workers property to control development. China has harnessed foreign capitalist investment and kept enough capitalist profit in China, to emerge as an imperialist power. That is China is now investing its own capital internationally. The resources of the Pacific region are of interest to imperialist powers, as US investments wane China emerges.

Already the largest export destination of Australia's exports is now China (from previously being the US).

US imperialism wants to limit China's trade and investments, and protect its own. The US will push its own military and security agenda. NZ govt is following US agenda with Security laws going through parliament.

The TPPA is an economic tool to push "free trade" agreements, similar to other FTAs but under today's imperialist conditions. Similar, since all "free trade" within capitalism means that imperialist will super-exploit the colonies/semi-colonies for cheap labour and raw materials. Under today's conditions the rate of profit for capitalism continues to fall, as shown in the 'financial crisis', which was a symptom of the falling rate of profit in capitalist production. The TPPA looks to open new opportunities for capitalist expansion and to restore their profits e.g. to force govt privatisations and allow monopoly firms to strip resources.

NZ and Australian economies have not been hit by the capitalists' crisis as much as European and US economies because of expanding China has created a huge demand for raw material exports to China. China has passed the US as Australia's biggest trading partner. NZs recent FTA with China has continued to open up trade between NZ and China to which NZ supplies raw materials - wood, steel, coal, milk powder, wool, etc.

The NZ state is openly subordinated to Australian, US and Chinese imperialism and becomes a mere manager for foreign investment, and the force for social control - defending capitalist property and imperialist interests.

Who will stop the TPPA? Not the trade union bureaucracy! The so-called TU mobilisation against the TPPA is not about fighting imperialism but dragging workers into the bosses’ agenda of exploiting the economic nationalism that links the ruling class from right to liberal left and the union bureaucracy to negotiate best terms with US and China.

Where has there been any discussion in the unions over what position to take on the TPPA? The CTU leadership is simply taking the longstanding position of economic protectionism to protect NZ jobs and of course the top union officials’ jobs. This is an ‘economic nationalism’ that claims that each nation should retain its economic sovereignty and thus to ensure that all classes benefit as a result. It is a strictly a utopian reformist program. It fits well with the national populist program of the left bureaucracy in the unions which sees China as a progressive force allied to the Bolivarian regimes in Latin America, much as the Green Left in Australia does.

It ignores the reality that NZ is a weak and declining semi-colony, subordinated to Australia and the US and increasingly China. The race to the bottom won't be stopped by joining forces with nationalist organisations that promote reforms to protect NZ’s so-called sovereignty in the face of global capitalist crisis. Despite and because of nationalist policies endorsed by the union bureaucracy, no political party can impose this through parliament.

The pathetically weak ‘centre-left’ Labour Party, and the rightward moving Greens are all in sucking up to the weak NZ bourgeoisie to negotiate the terms of 'our' national sovereignty which barely exists. There are already virtually no limits to Foreign Direct Investment (FDI) in NZ, capital flows in and out without any borders. Attempts to stop FDI appeals to national chauvinism as the recent opposition to Chinese buying farmland showed, and in the racism and discrimination directed at migrant workers. The real danger is that this nationalism and racism morphs into fascism and becomes the basis of uniting rightwing workers with a bankrupt middle class behind the NACTs wars against Islamic ‘terror’ (already happening in Afghanistan) and Chinese ‘communism’.

So the only way to stop the attacks which the TPPA means for workers is to reject any campaign based on the program of the nationalist bosses which is to rally the unions, labourites and left academics like Kelsey into a cross-class, legalistic, ultimately parliamentary opposition. That's a popular front and makes workers servile to a weak fraction of the national bourgeoisie which barely exists.

Class Struggle to stop the TPPA

Rather we fight FTAs by working class methods, we oppose privatisation by calling for nationalisation by mobilising union fight backs, occupations etc i.e. ‘socialisation’! That's what we mean by a workers united front.

That means that the content of what is 'national' is not defined by the bosses or their agents, but by the working class. Of course most of the working class are infused with nationalism and in a semi-colony like NZ much of that is directed at imperialist countries that profit from our labour.

But 'nationalism' is a barrier to uniting workers across borders in a proletarian ‘internationalism’. The defence of 'nationalism' that is based on resentment towards foreign ownership has to be put on a class footing otherwise it becomes the basis for fascism. So nationalisation of a company for example must always be done not the basis of 'nationalism' to defend NZ jobs etc., but an internationalism that recognises that most firms are already multinational and that defence of workers’ rights and living standards demands the expropriation of imperialist and national companies without compensation and under workers control. So we must demand the socialisation of multinational firms by building a campaign among workers in all countries where this firm operates.

The approach of the rank and file in the unions should be to mount industrial action to get rid of this NACT government and to put demands on Labour to adopt policies that meet the needs of workers. Our purpose is to expose the failure of reformist social democracy to fulfil those demands. We do not support new reformist parties on the left putting pressure on Labour. We support rank and file unionists putting up candidates on a program to deliver what workers want. Not just minimal demands for jobs, wages, houses etc paid for by a transaction tax, or even the Greens’ capital gains tax. Parliament cannot meet these demands.

A new Workers’ Party would use parliament only as ‘sounding board’ to expose its bankruptcy and to mobilise workers to organise independently of parliament and the state. Instead of locking workers into parliamentary legislation for minimum wages, etc., workers need to revive the unions as democratic, fighting unions to impose their demands in the workplace. To do this, it is necessary for strikes, occupations of workplaces facing closure and sackings, occupations of vacant state houses, the occupation of state SOEs under threat of privatisation, and the expropriation of the banks and formation of one state bank, all under workers control. That is, a new Workers’ Party must raise not just a minimum program for immediate reforms, but a transitional program which maps out the road to socialism.

Within the unions it is the job of revolutionaries to raise these demands in a transitional form and explain that to get them we have to take power and what that means and how to do it. The first principle of a transitional program is that it must be international and geared to the current world situation. Isolated actions (even on a pan Pacific basis) around FTAs are part of a much bigger struggle against a global capitalist crisis and mounting inter-imperialist rivalry. The TPPA is really about the US reclaiming the Pacific to prevent China from making further inroads.

So what is behind the TPPA is the growing rivalry between the US and China. NZ workers have to reject NZ nationalism as nothing more than pulling workers into a reactionary nationalism to go to war as an ally of the US in the coming fight with China. Workers have to refuse to fight in such wars and reject the NZ national bourgeoisie and its subservience to the US (all the current political parties), break from their agents in the unions (the bureaucracy), and join forces internationally with workers in all of the Pacific countries and in particular, China and the US.

The real issue for workers is not to oppose free trade as such, (or FDI which already exists since capital doesn’t recognise borders, or even against privatisation by ‘foreign’ firms), on the basis of protection of NZ jobs and living standards, but rather the fight for class independence and proletarian internationalism. Opposing the TPPA then has to be by working class methods, mobilising the unions to stop privatisation, resisting all of the NACTs attacks on workers, defeating the NACTs, putting demands on Labour to expose it by raising a working class program, reviving the unions, building strike actions and strike committees and defense committees to prepare for a general strike and for a Workers’ Government.

Therefore revolutionaries in the unions should be opposed to the TPPA as one of many measures sucking NZ workers into a national alliance with the US to fight China. We put forward a workers international program to defend jobs, wages and rights, and to advance workers organisations to do it, in particular to break from their own bourgeoisies and their agents, everywhere in the Pacific without borders, especially China and the USA.

For a Socialist Federation of Pacific Republics!