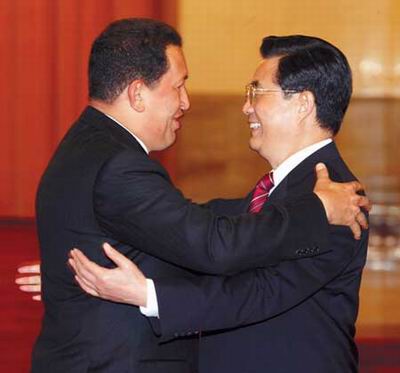 Chavez’ call for a "5th International"

Chavez' call comes at a time of escalating inter-imperialist rivalry involving the US. But the main protagonists are not the long standing rivals, France, Germany, Britain and Japan. These are all either abject lackeys (Britain and Japan) or temporary allies of the US (France and Germany). The new rivals are the emerging imperialist powers Russia and China, both having being defeated after decades of encirclement and imperialist aggression, and forced to restore capitalism, they have nonetheless refused to succumb to US domination and are now asserting themselves as new imperialist rivals.

Moreover, they are emerging even more strongly as rivals to the US at a time when the US economy is facing a deeper double dip recession or depression. While the US and the EU went into recession China in particular kept the world economy from slumping into a deep recession through its ability to continue expanding domestically and internationally. Russia too, while much weaker due to its economic collapse after 1991, was able to weather the recession because of its expanding economic power. The only explanation for this expansion while the rest of the capitalist world is contracting is the legacy of these two countries as former degenerated and deformed workers’ states.

In this growing inter-imperialist confrontation - economic, political and military - Chavez and ALBA [Bolivian Alliance for the Americas] have sided with a number of states which are part of the China-Russia bloc. In Asia this bloc includes many of the former states that were part of the USSR, now the CIS [Commonwealth of Independent States] minus Georgia and Ukraine, as well as China's autonomous territories, including Xinjiang Uygur and states like Tibet and Inner Mongolia. Wider afield they include the other members of the SCO [Shanghai Cooperation Organisation] and ‘observers’ such as India, Iran and Pakistan. In Africa, China and Russia have many Joint Ventures with national governments such as Zambia, Angola, Sudan, Congo and Zimbabwe that allow them to exchange loans or infrastructure for oil, gas and minerals.

The new international reality then is one where the US is committed to spend more than it spent during the Cold War in invading Iraq, Afghanistan, and now extending this war to Pakistan, and building bases and missile sites strategically placed to isolate and divide Russia and China from their spheres of interest, especially Eurasia, but also in Africa where “AFRICOM” [African command of the US imperialist military machine set up in Ghana in 2008] operates in nearly every country where China has assets and investments, and now also in Latin America where the US sees China increasingly as the banker of ALBA.

War is politics with bombs

This standoff has already led to proxy wars such as that between Georgia and Abkhazia and South Ossetia in the Caucasus. The Afpak war (the Afghan war now spreading into Pakistan) against the Taliban is all about using Afghanistan as a forward base to push into central Asia and the sphere of Russia/China. Each war can easily escalate into proxy or open wars with Russia or China. The most threatening new war would see Israel bomb Iran in a proxy war between the US and China/Russia. China is now Iran's main partner in developing oil and gas. China major oil and gas deals with Azerbaijan and Kazakhstan are squeezing US interests out of the picture and producing alarm in the US ruling class.

In Sudan the US and China are long term rivals. The oil interests of Exxon and Total have been taken over by Chinese companies. The secessionist south of Sudan is backed by Uganda, a longstanding US ally in central Africa. The wars in the Congo that have taken millions of lives are all over which imperialist power will get its hands on the vital minerals needed in modern computers and cellphones. China is now a new player in this deadly game. In Nigeria China is bidding for the oil assets of Shell. In Zimbabwe, China is now the main partner in the re-development of that almost devastated economy. In each case, the clash of interests between the US bloc of powers and the Russia/China bloc is the main underlying cause of all new political and military conflicts.


Chavez is where on all this?

Chavez has aligned the ALBA states (Cuba, Venezuela, Equador, Bolivia etc) with the Russia/China bloc. For him the wars are coming closer. Israel is practicing bombing raids on Iran. The US has already taken down Zelaya the President of Honduras in a military coup because he was aligning himself with ALBA. The US is building 7 new bases in Colombia, one right on the border with Venezuela. The US is threatening new coups in Sudan, Paraguay and now Nepal.

But ALBA by itself would be an easy target for US coups. The problem for the US is that ALBA is aligned to Russia/China, is bankrolled by China, and armed by both Russia and China. So Latin America the long time backyard of the US is now likely to blow back all the way up to Mexico.

What's more the Russia/China block expansion has given ALBA and its allies the economic bankrolling to allow these states to downplay and even ignore US interests. So when Morales (Chavez No 1 partner) nationalised Bolivian oil and gas again in 2006 (it was privatised after 1985), he drove harder bargains with foreign firms. Today the only major players remaining on Morales terms of a 51% state share and a tough tax regime are the Brazilian SOE Petrobras and the Spanish Repsol and French Totalfina. China has taken advantage of the Bolivarian regime to become a new strategic partner for the development of Bolivia's oil and gas. China is increasingly displacing France and Spain as the major rival to US interests in Latin America and the US does not take this lightly.

This is what is behind Chavez's call for a "5th International". It has nothing to do with the previous revolutionary internationals. In fact Chavez is rejecting all of them as too revolutionary. They were all founded with the aim of organising the working class to overthrow capitalism and establish a proletarian dictatorship. Chavez wants nothing of this 20th century revolutionary socialism. He says socialism is necessary, capitalism must go, and the state must be smashed. But it is not the working class that he wants to do this. He is already doing it he says. His military, his nationalisations and his future plans for 21st century socialism on a world scale are sufficient.

If we look at Chavez plans we can see that for him ALBA and its semi-colonial allies can bring about socialism in a strategic alliance with Russia and China. When he visited China recently Chavez spoke of walking with Hu Jintao on the road to "socialism".

So while Chavez talks left, praises Marx, Lenin, Trotsky and Castro, he also admires Mao (not to mention Simon Boliva and Jesus Christ). This means that he sees himself as a ‘Bonapartist’ figure [a national leader named after the French General Napoleon Bonaparte] apparently standing for the national interest and capable of bringing workers and peasants, together with small businesses and loyal capitalists in many countries to add a mass base to the Russia/China bloc and push it to the left as a 'progressive' alternative to the US led bloc of imperialist powers.

Thus Chavez  "5th International" is an appeal to the masses in all of these countries (and to the masses in the US bloc powers as well) to unite to do away with capitalism's neo-liberal excesses, and replace it with a progressive form of popular capitalism where the state owns the strategic economic sectors and where popular assemblies plan production for human need instead of inhuman greed. This will be 21st century socialism. In fact is a return to 19th Century socialism which Marx ripped apart in his Critique of the Gotha Program.

The trouble is that this is a utopia. The states that Chavez tries to rally into a progressive bloc with Russia and China are all capitalist (apart from Cuba and DPRK -North Korea). What is more Russia and China are newly emerging imperialist powers. There is nothing progressive about them. They are run by capitalist ruling classes just as are the US imperialist bloc powers. They all exploit their workers to hell. When these two big blocs confront each other in new wars on every continent, they will use the masses to fight these wars just as they did in all the previous wars. By tying workers and peasants to a "5th International" behind China and Russia, Chavez and the ALBA regimes will disarm these same workers and peasants in every war that is fought on behalf of the US and Russia/China bloc.

Therefore it is clear that Chavez's "5th international" is actually a "fifth column" in the workers movement. This is a term from the Spanish Revolution in the 1930s when on the Republican side those who acted as the agents of the opposing fascist nationalist enemy were branded as "fifth columnists" inside the four columns of the Republican army. It means simply that Chavez represents the class enemy, whether he wishes it or not, because he is forming an international in which the bourgeoisie are present in the ranks of the masses. There can be no reconciliation with these antagonistic class interests, they are deadly enemies!

That is why we say that only workers can build a 5th International, one based on the revolutionary programs of the previous internationals before they betrayed the revolution. The 5th would be the successor to the revolutionary First of Marx's time which collapsed in 1879; the Second before it betrayed and sent workers to fight one another on August 4 1914; the Third which arose out of the Russian Revolution but betrayed by refusing to fight fascism in 1933 allowing Hitler to come to power; and the Fourth which took up the Marxist- Leninist program but collapsed and liquidated itself after the Second World War. Any new workers international will have to be based on this whole revolutionary legacy from Marx to the Founding Program of the Fourth International of Trotsky in 1938.

This program says clearly that only the proletariat can lead the revolution to overthrow capitalism and impose a dicatorship of the proletariat to build a socialist society as the foundation for a future communist society. The working class cannot form any alliances with its class enemy - the bourgeoisie - other than a military alliance to defeat imperialism. But always it is the proletariat that will make the socialist revolution, against the bourgeoisie whose class interests are aligned with imperialism against the workers. Chavez's call for a 5th international is a travesty of this revolutionary heritage and death trap for all workers and peasants around the world.