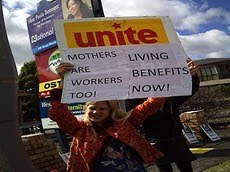 A ministerial group (including Beneficiary Bashing Minister for Social Development Paula Bennett, and Not Achieved Education Minister Anne Tolley) will make the final decision, and legislation is expected around September this year. WINZ looks set to be replaced by Employment and Support New Zealand (ESNZ) in July 2012, with all benefits being replaced by a single Job Seeker Allowance.

Benefits cut and no jobs

Benefits are at half their pre- 1991 levels in real terms compared to the minimum wage. A quarter of New Zealand children (and rising) live in poverty. Child abuse levels are through the roof. The Red Cross distributes food to hungry children in our schools. Food prices are soaring and 271,000 are officially jobless. Aotearoa’s registered unemployed rate continues at 6.6%, up 0.5% over the year, and that’s excluding Canterbury. Anecdotally, staff at a North Shore WINZ office have reported a rise in applicants from around 40-50 a week to 800 a week since the recession began. Youth not in paid work (20-24 yr olds) is staggeringly high at 35% while only 12.5% are registered as unemployed.

Despite this alarming poverty and unavailability of jobs, the National Government continues to pursue an “unrelenting work focus” (Ministry of Social Development catch phrase) and plans to drastically slash the remaining benefits and to “reduce considerably those on sickness and invalids benefits”. Thousands have already been taken off the invalids benefits losing $50 per week. The Rebstock Razor gang wants to reduce spending by nearly a third from around $4.7b to $3.4b per year by 2011 (dishonestly represented as $47b and $34b which is the amount for the entire ten years.) It aims to cut 100,000 people off the welfare rolls in the next decade above those who will get jobs with the projected economic recovery. Overall, it hopes reduce those on a benefit from 360,000 to 100,000 by 2021. It also plans to increase the proportion of beneficiaries having to seek work from 37% to77%; with possible work for the dole.

Commentator Gordon Campbell puts it this way: “If the American models for these reforms are anything to go by, those 100,000 people will not simply vanish – they will turn up on our street corners, living out of cardboard boxes.” At the same time the Chief Executive of the Ministry of Social Development earns around $ 540,000 per year (2009 figures). “Now how many 'ordinary' wage and salary earners could live off that?” (Radical, beneficiary activist, in Indymedia discussion)

Not Having a Job is now Seen as a Mental Illness

In order to slash the numbers on the welfare rolls, a key target of the Welfare Working Group (Razor Gang) is the half of the 145,000 sickness/invalids beneficiaries which it says have “unmet mental health needs” which prevent them from working. The ministry admits that it could take “several years” to turn these 72,000 'mentally ill' people into a source of profits. “But we can't wait a year to start ... so we are getting on with training people. Those people will be essential."

Professor Des Gorman, a member of the Rebstock Razor Gang, and chairman of Health Workforce NZ proposes that the Government trains more mental health nurses, and more general practitioners to take “ a special interest” in mental health and addiction. He calls for ACC style 'rehabilitation' to be available, which no doubt roughly translates as “work will set you free” (arbeit macht frei”).

While it is a good idea for those making decisions about the lives of 'mentally ill' beneficiaries to actually learn something about the subject (as at present none of the Regional Health Advisors or designated doctors working for WINZ have a clue) ; the new courses will undoubtedly be a vehicle for the government’s “unrelenting work” focus. It’s likely to become increasingly difficult for anyone (especially a trainee) to question this semi- fascistic approach whose real intent is hidden behind caring language. Here’s an example of the Welfare Working Group’s misuse of language. And here’s the NZ Herald editorial , ‘Work helps ill beneficiaries get better’, replicating the MSD stories as if they were true, and their solutions as if they were commonsense: “Psychological disorders, led by stress and depression, accounted for the entire increase in sickness benefits and a third of the increase in invalids benefits from 1996 to 2002.”

The trainees could well become 'essential', working for low wages, employed by private contractors or NGO’s, learning how to diagnose “mental health needs” in every second sickness beneficiary and prescribing work cures and benefit cuts for most of them. Perhaps underpaid trainees might even run programmes at boot camps for the sick, mentally ill and disabled, similar to those for law breakers and unemployed already being criticised by John Key’s Science Advisor.

And where is this 'Mental Health'’ money coming from? The short answer is-beneficiaries and the sick will pay for it with cuts to benefits and services! Unlike in Australia, where A$2.2 billion extra per year for five years has been provided to 'help' the mentally ill into work , nothing extra has been provided in National’s Budget. So the money has to come out of existing funds for Social Development and Health, despite talk about $1.3b having been “ring fenced” for the project.

The view of unemployment as a ‘mental illness’ is a form of victim blaming. Rather than admitting the truth that the capitalist system needs unemployment to keep wages down and profits up, this view blames the individual for their predicament and suffering. It promotes the delusion that therapies and drugs for the individual can solve the problem of unemployment. The only thing that can solve unemployment is to end the system that creates it!

Robert Steenhuisen, co-chairman of the National Committee for Addiction Treatment spoke out in support of these proposals. With a background in compulsory addiction treatment for offenders, he said that group sessions would probably work best for beneficiaries who often had multiple problems besides addictions. The possibility that some people don’t like working in groups is not mentioned. He went on to say “"People have to reach a certain level of awareness that this is how their life is and that no one is going to make it better for them except themselves".

In this arrogant prescription, there’s no mention of the social causes of people’s suffering that are largely beyond their control-unemployment rates, poverty, social isolation, racism, sexism, beneficiary bashing, harassment, state and family violence to name a few. Instead we need to learn that it’s all our fault!

Robert Steenhuisan does say one good thing though: “Working with people in groups helped them realise they were not the only ones with difficulties.” The possibility is always there for people forced together on some ESNZ programme to actually unite together to fight for their rights.

The New Zealand College of Nurses uncritically reprints an outline of the 'Work Focused Support' approach of Dr David Bratt, Principal Health Advisor of WINZ, (described by Radical as a “simple GP’ in Wellington) on their website. They describe it as “a more integrated approach to combining matters of health and disability with aspects of social wellbeing which fits well with a nursing approach”. Perhaps this support has something to do with the fact that the majority of the Regional Health Advisors employed by WINZ were intended to be nurses.

“I have seen bizarre and absurd 'second opinions' that were totally contrary to the opinions the normal GPs’ or other health practitioners’ (that) clients see...The onus is being put onto the ill person to 'prove' that she/he is really as ill as doctor's medical certificates state. Indirectly the Ministry also treats medical practitioners that are not working with them as 'designated doctor' as possibly not being competent enough to make the assessments they make." The only option WINZ provides for a beneficiary who is not happy with the decision of a designated doctor is to take the matter to a 'Medical Appeal Board.' The decision of this board is final.

As Radical points out, WINZ’s “unrelenting work focus” compromises medical ethics. The ethics of any health professional surely require the health interests of the patient to be put first, rather than the employer’s interests to have them on the labour market. Indeed the horrendous treatment that many people with health and disability issues have faced by WINZ has in fact CAUSED enormous mental health problems for some people. One commentator put it this way on facebook: “They have their own doctors lined up-stacked with arseholes-just like ACC....I wanted to throw up.”

Compulsory Treatment
Re-casting sickness or invalids beneficiaries as mentally ill, addicts, or akin to criminals provides an excuse for completely stripping them of their human rights-not that they had too many to start with!-and exercising total control over them. Many beneficiaries have spoken of the 'soft fascist', 'police state' or 'nazi'-like way they are being treated. The current proposals for compulsory treatment of beneficiaries are reminiscent of the Soviet post Stalinist era when political dissidents were forced to take neuroleptics, mind numbing psychiatric medication; or of the identical forced drugging of social dissidents (eg poets, blacks, lesbians and gays) in the USA who were unfortunate enough to be diagnosed as being mentally ill (See Mad in America by Robert Whitaker, especially pages 211-219). One person reported on facebook: “Compulsory treatment has already started. People are being forced to take medication or lose the benefit as it is seen as not making an effort to get better... even if the medication makes them worse, and there are no other options.”

What needs to be done?

Many beneficiaries are finding that their lives are being increasingly controlled by WINZ designated doctors, regional health advisors, or case officers who are ignorant of , unsympathetic towards, or plain hostile to their real needs;- such as an adequate income, genuine connection to others, and some autonomy over their own lives. Adding a layer of mental health trainees and intensifying pressure to look for work, is adding insult to injury.

Under this increasing pressure, beneficiaries are fighting back spontaneously and are starting to get organised. In one case "a woman (at DSW) who was obviously stressed and desperate for some assistance was stone walled at the counter. She picked up her baby, 18month old and popped her on the counter and walked away... Suddenly, there was this huge commotion and the tone from the dept changed.” (reported on facebook).

Individually, beneficiaries resist WINZ decisions by making appeals, sometimes with the help of advocacy groups, and one beneficiary is challenging the legal basis of entire WINZ policies. Some beneficiaries are joining the new Te Mana movement to try to defeat National’s policies.

What is needed is a combined fight back of beneficiaries and paid workers, with community organisations, anti-poverty groups, advocacy groups and unions working together. Unions need to include beneficiaries in their ranks. The Unite union was set up to do this, but so far has not done so, apart from the Waitemata Branch which is successfully organising at a grass roots level.

The protests in North Africa and Europe have shown that unemployed can indeed fight back, and even lead revolutionary movements. This is giving inspiration and hope to beneficiaries here in Aotearoa. We need to drive National out, fight in our communities and workplaces, and end capitalism. Expropriate the expropriators! In its place we need a socialist society where people work together to meet real human needs, where women and children are at the centre and not the periphery, and where vulnerable members are treated with caring and respect.
Posted by Dave Brown at 10:53 PM