Africa: DRC caught between the US and China 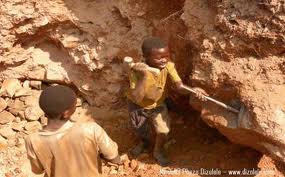 The UN Mapping Report on genocide in the Democratic Republic of Congo (DRC) released on October  highlights the basic causes of the more recent wars that have raged over the Congo’s rich resources since its independence in 1960. The report focuses on the period from 1993 to 2003 in the East of DRC, and argues that Rwandan forces were among those of 7 armies from different countries that have been active in the DRC to illegally exploit the mineral riches. The report has been toned down because of the objections of Rwanda to its description of the genocide of Hutus in the DRC over this period.
It is clear that behind these wars is the scramble by a number of imperialist powers and their African proxy armies for control of the huge mineral wealth of the DRC. Historically European powers and the US have been the major imperialist partners. While Chinese companies have long been beneficiaries of the ‘informal’ mining of Coltan, cassiterite (tin), gold and diamond wealth of the East of DRC, today China has become the main official imperialist partner of the Kabila regime in taking over copper production in Katanga. The situation is ripe for more explosive confrontations between the militias aligned to the interests of Chinese and US imperialism over the exploitation of the DRCs mineral wealth.


As the author of the Mapping Report points out, the focus on war crimes and genocide in this report confirms what has been known for years: “The most serious and systematic crimes are placed firmly on the doorstep of Paul Kagame’s Rwanda. The report not only mentions dozens of occurrences of war crimes and crimes against humanity, but also points at “circumstances and facts from which a court could infer the intention to destroy the Hutu ethnic group in the DRC in part”, a reference to the genocide convention.
A UN investigative team already came to a similar conclusion in 1998:
“The systematic massacre of those (Hutu refugees) remaining in DRC was an abhorrent crime against humanity, but the underlying rationale for the decision is material to whether these killings constituted genocide, that is, a decision to eliminate, in part, the Hutu ethnic group”. The psychologically charged discussion of the ‘g word’ is not that relevant: the other documented crimes are serious enough to warrant the prosecution of suspects. The report does not even address the tens of thousands of civilians killed by the RPF in Rwanda in 1994 and between 1997 and 1998.
Besides Rwanda, many other regional players were responsible for serious human rights violations: the armed forces of Congo, Angola, Burundi and Uganda are mentioned, but also unofficial armed groups ranging from ethnic militias to rebel movements from Congo and neighbouring countries. Apart from a few militia leaders from Ituri and former rebel leader Jean-Pierre Bemba, no one has ever been prosecuted.”
What underlies these decades of violence in the DRC?
In his response to the release of the Mapping Report, DRC Justice Minister Luzolo Bambi points to the competition between Western companies for natural resources as the basic causes of the violence described in the Report, but claims that: “The mapping project does not take into account the criminal responsibility of all those corporations, multinationals and other international consortia of companies which have funded and continue to fund the war in DRC...These contractors and supporters of war and death must also have a place reserved in a criminal trial.”
Bloomberg reports: “Congo holds 4 percent of global copper reserves, is among the world’s largest producers of cobalt and industrial diamonds, and is Africa’s largest producer of tin ore, known as cassiterite, according to the U.S. Geological Survey’s website.
In 2002, a UN report on the exploitation of natural resources in Congo found that 85 companies may have violated the Organization for Economic Cooperation and Development’s Guidelines for Multinational Enterprises by supporting the war directly or indirectly. The guidelines are non-binding principles and standards for the behaviour of companies from OECD countries.
Several mineral traders on that list, including U.S.-based Cabot Corp. and U.K.-based Amalgamated Metals Corp. Plc, have denied they were doing business in Congo or eventually stopped working in the region."
Chapter 3 of the Mapping Report provides an overview of the proof that the Hutu militia in the DRC, the FDLR (Democratic Forces for the liberation of Rwanda), acts in collaboration with the DRC armed forces - the FARDC - to control much of the production of minerals in North and South Kivu. These forces are aligned with the Kabila regime but at the same time acting independently to profit from mining minerals. They are constantly engaged in warfare with the Rwandan and Ugandan backed forces, in particular the CNFP (National Congress for the Defence of the People) who are likewise fighting to control mining and the lucrative exports of Coltan, cassiterite, gold and diamonds. The Rwandan and Ugandan forces are aligned with the US and are hostile to the findings of the Mapping Report especially the reference to Tutsi genocide of Hutus in the DRC.
The UN Report of the Group of Experts in 2008 goes much deeper and traces the illegally mined minerals from their source through the merchants to export and finally to the companies in a number of countries which fund the trade and exploit the mineral wealth. They include Traxys (Belgium), Afrimex (UK) Thailand Smelting and Refining, Emirates Gold (Dubai) and others. Thus much of the DRCs mineral wealth ends up in the hands of many intermediaries including the militias in the East of the DRC,  and the agents in Rwanda, Uganda, Zimbabwe etc, before finally ending up in many countries including Austria, Belgium, Canada, China, Hong Kong, India, Malaysia, Thailand, South Africa, Switzerland, Netherlands, Russia, UAE and UK.
China’s collaboration with the DRC

What about China’s growing influence? China has moved into the DRC with a massive deal with the regime of Joseph Kabila to mine copper and build infrastructure in Katanga.
Joseph Kabila and the DRC army are also working with Chinese interests in the informal mining of Coltan and shipping it out via Zaire. This has attracted the attention of NGOs exposing the inhuman methods used by Chinese firms.

From a RAID report of China’s mining operations in the DRC:
“Concluding, RAID states that the report does not seek to embarrass the People’s Republic of China (PRC) nor to tarnish its image in the developing world. The report does however provide first hand allegations of widespread corporate misconduct and human rights abuse by Chinese companies operating in Katanga, which should prompt the Chinese and DRC governments to take urgent measures. The report’s findings highlight the need to promote greater awareness of responsible corporate behaviour among Chinese companies operating abroad. The problems described in the report are not confined to Chinese operators and similar conditions prevail in companies owned by Congolese or nationals of other countries. But the Chinese are the most significant operators in the mineral sector in Katanga. According to the Governor of the Province more than 60 out of Katanga’s 75 processing plants are owned by Chinese companies and over 90 per cent of the region’s minerals go to China.6 Congolese workers and Chinese managers have given candid accounts of the indignities, harassment, threats and abuse that they endure on a daily basis. They have set out what they feel is needed to improve workplace conditions, environmental protection, health and safety standards, community relations and corporate accountability. The recommendations addressed to both the DRC and Chinese Governments are set out at the end of the report. In RAID’s view it is only by supporting such improvements that China can hope to reach the goals that it has set itself in its Africa foreign policy declaration concerning sustainable development and harmonious relations between peoples.”
The DRC is an ongoing arena of inter-imperialist rivalry over the illegal mining of valuable minerals. The US and the EU imperialist powers have traditionally been the main exploiters of the Congo. But recently China has become the main imperialist partner of the Joseph Kabila regime in the DRC. The two main militias are the CNDP aligned to Rwanda and Uganda and thus the US, while Kabila’s FARDC and the militias it backs are aligned broadly to China. The growing rivalry between these two imperialist powers can be seen as the ultimate cause of the ongoing barbaric wars, mass rape and slave labor conditions suffered by the people of the Eastern DRC.
Posted by Dave Brown at 12:49 AM