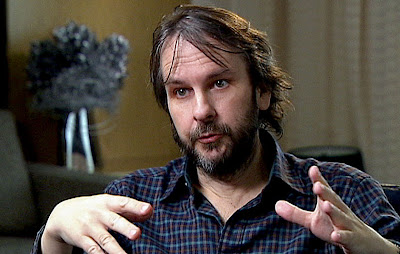 Sir Peter Hobbit: "We pay them 3 foot 6 inches"
The Hobbit ‘blue’ shows us how the global crisis is impacting on NZ in such as way as to reveal its semi-colonial subservience to Australian, US and Chinese imperialism. As the NZ bosses bend over forwards to attract investment in NZ they are forcing down costs especially wage costs. That is why the NACTs are hell bent to destroy the power of the unions to fight this ‘race to the bottom’. The NACTs are shit scared that the 20,000 who rallied against their new 90 day fire at will Bill will be seen as ‘labour instability’ and a turnoff by foreign investment. This is why the NZ Actors Equity has been turned into a whipping child to discredit and bash the unions.
CTU head Helen Kelly stood up to the union bashing of Peter Jackson and the NACTs desperate to mobilise the mindless mass pulverised by the MSM purveyors of lies.  When 20,000 workers rallied against the latest round of NACT attacks (90 fire at will, on sick leave, on union access) designed to smash union power in the workplace, Actors Equity was made into a scapegoat by the billionaire film maker Jackson and his backers Warner Bros., for asking for a basic industrial agreement. This has the effect of further polarising the country between a growing section of the working class that this standing up to the NACTs attempts to screw maximum profits out of NZ workers, and that lumpen section that sees the unions as the cause of all its ills and identifies not with organised labour but with the petty bourgeois middle classes social climbers.
The former is the unionised base that is recovering from 30 years of attacks and declining membership and reviving as the militant layer that is resisting NACTs cuts in jobs, wages and social spending. This includes the teachers, doctors, radiographers, students, etc all engaged in or preparing for protest or industrial action. But the really scary spectre of Karl Marx given the bankers nightmares are big battalions of low paid service workers in SFWU, UNITE, NDU and AWU who organise low paid service workers and are heavily youthful, female and Maori and Pasifica in membership. The 20,000 who rallied against the NACTs attacks on October 20 were overwhelmingly made up of low paid, casualised, impoverished workers who have not experienced big defeats and who are prepared to fight.
The second anti-union group is made up of the small bosses and their professional hangers’ on in the law, management, media and advertising, whose incomes depend on trickle down profits from international capital making mega profits from NZ.
But the biggest section is made up of the lumpen or backward layers of the working class who have been de-unionised since the onset of Rogernomics and the 1991 ECA, combined with the big majority that have never been unionised in every sector of the economy. Many of these are the owner-operators or self-employed such as the contractors in the film industry and in all those related industries which benefit from film making in NZ, especially construction and tourism.
Two years into its term the NACTs are running out of ideas. It has rushed through legislation under urgency to pay off its backers but now the ACT party has imploded in scandal and fraud. The Maori Party has nothing to show for its existence. Hone Harawira is breaking ranks over the neo-colonial blanket thrown over the F&S. The bankers club has lost direct control over Auckland and will try to retain it by controlling the CCO. The Labour Party takes a slight left deviation back to Keynes. Then 20,000 workers say NO to the 90 day fire at will. Then Hobbiton blows up and Key promises the Hollywood money barons to keep the unions on a legal leash
The class divide becomes more polarised week by week proving that the class war will intensify and become full-on in the next year leading up to the election in 2011. The right has the advantage of concentrated power and organisation. If the left is to win it has to organise the mass majority from the ground up based on the renewed vitality and power of the unions. Workers need to rebuild the unions as fighting, democratic organisations capable of throwing out the treacherous collaborationist union leaders, and building workers councils and defence committees as a power base to launch a general strike to defeat the NACT regime and open the road to a Workers and working Farmers Government
Posted by Dave Brown at 7:43 PM