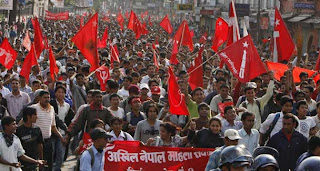 The Maoist CP (N) under the leadership of “General” Prachanda has run its course from tragedy to farce. Refusing to complete an armed insurrection after 10 years of civil war it turned to parliament to bring about a ‘bourgeois’ revolution. This would mean another 10 years collaborating with the Congress Party (traditional party of the weak Nepalese bourgeoisie), with the World Bank, the IMF and multinational capitalism, to prepare the conditions for “21st century Maoism Chinese style”.

Really! We condemned this at the time as an open betrayal of the masses and predicted it would end in bloodshed. But this tragedy has turned to farce.

Now Prachanda has resigned because the Nepalese military will not fulfill the agreement to incorporate the members of the demobilised Maoist army! This is not the failure of “21st century Maoism” but 20th century Stalinism with tragic-comic characteristics. The Stalinists first openly betrayed in China in 1927 when the Comintern (Stalinised Communist International) insisted that the Chinese CP formed a political alliance with bourgeois General Chiang Kai-chek against the Japanese. Chiang turned on the leadership of the CP and massacred it.

It seems Prachanda wants to turn the tragedy of China 1927 into the farce of Nepal 2009. While Chiang had to plot to surprise the CCP leadership to kill them, in Nepal Prachanda delivers the flower of the Maoist rank and file into the arms of the bourgeois state military in the name of “democracy”. But when the army refuses to recruit the Maoist rebels into its army, the communist “General” Prachanda, resigns as Prime Minister and incites the Maoist ranks to go back to the ‘streets’ to re-impose “democracy”.

Perhaps he has in mind here the mass public demonstrations such as we have seen in Thailand recently, where the masses have been used by warring factions of the national bourgeoisie to don red or yellow T-shirts in the name of “democracy” i.e. parliamentary musical chairs.

Or perhaps he means something like what happened in the French colonies and ex-colonies recently where mass mobilizations produced rapid concessions from Sarkozy and his local hirelings to re-impose French imperialist rule.

What is sure is that Prachanda has constituted the Maoist leadership as a state bourgeoisie that is in competition with the old bourgeoisie, and is using the masses as street mobilization fodder to win the franchise of the IMF and World Bank to administer Nepal for imperialism.

He is staking his reputation as a new bourgeois Bonapartist, on persuading the “international community” that he is serious about demobilizing his Maoist army into the state military, and that it is only the old guard that has ties to feudalism and the Indian Congress Party that resists his “modern peoples army” and a new decade of peace and democracy.

Now the Australian Democratic Socialist Party has come to the rescue: “All those who believe in the principles of democracy and social justice, who believe that people should not be condemned to backbreaking poverty simply because the powerful have carved the world up among themselves, need to support the people of Nepal and insist that:
* the Nepalese people must be allowed to determine their future, foreign intervention must end;
* the peace accords must be upheld; and
* democracy must be respected and the people’s will implemented.

It seems that the DSP treats Marxism like a religion – beg and you shall receive.

But farce is never an improvement on tragedy. Trotsky said of China in 1927 that the CCP leadership had to maintain its armed independence from Chiang Kei-chek and to take over the leadership of the national revolution to defeat the Japanese and the Chinese ruling class. Only the armed workers leading the poor peasants could defeat imperialism and its national capitalist agents and make a socialist revolution.

The tragedy of the revolution betrayed in China 1927 gave rise to Maoism, where the Stalinist bureaucracy was forced to rule in the absence of a viable national bourgeoisie until it could turn itself into new bourgeoisie. Prachanda has compressed generations and has gone from Maoist insurgent to bourgeois Bonapartist in less than a decade to betray the revolution in Nepal.

Trotsky’s advice to the CCP still holds in Nepal today. There is no capitalist road to socialism. That is the road to counter-revolution. There is only the Permanent Revolution - the expropriation of the capitalists and the destruction of their class state. The Maoist rank and file must abandon the bankrupt farce of Maoism and recover their arms, mobilise independently of the state, and build armed soviets to take power for a socialist revolution.
Posted by Dave Brown at 4:30 PM