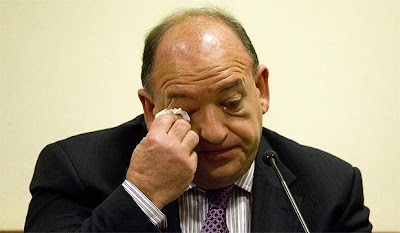 CEO Peter Whittall:  Too late for tears
The Royal Commission of Inquiry in to the Pike River Mine Disaster is exposing officially what anyone with half a brain knew at the time. Even John Key back in June told an audience in Australia that Pike River Mine, a coal mine prone to methane leaks, would have been illegal in Australia. The mine had only one ventilation shaft which had a fan below ground that would be destroyed in an explosion. This shaft was also totally unsuited as an emergency exit even though the CEO Peter Whittall still defends it as adequate. Safety manager Neville Rockhouse who lost his youngest son Benjamin, 21, told how his older son Daniel, one of two who survived the explosion, had not reported his safety concerns to his father because of ‘peer pressure’. Rockhouse also said he was on the point of resigning as safety manager because he did not think the ventilation shaft was adequate as an escape route and kept pressing management to build a ‘fresh air base’. He is backed up by former manager Doug White who said that the mine has no “plan to deal with an explosion” and no adequate real time monitoring of faults. Following this evidence the spokesperson for the families of the 29 dead miners Bernie Monk said: “These guys went into a death trap. They had nowhere to go and it has always been in the hearts of the families and now it’s out there.” Monk was also critical of the incompetent rescue operation that gave the families “false hope” when experienced miners were telling them there was no hope. Years of funding cuts to government regulators, removal of mandatory inspections, and pressure to produce a profit, combined to make the mine a “death trap”. Key still promises that the men will be recovered, but it’s now up to the miner’s unions to make sure that the mine doesn’t begin working again before the men are recovered. The least that Key can do is to immediately reinstate compulsory mine inspections and union monitored health and safety regulations, while fully compensating the families. But don’t hold your breath as the NACT regime is pushing hard for mining to pull the economy out of a hole. And behind this tragedy is the fact that predatory, destructive capitalism always puts its profits before people’s lives. The only assurance that mines can be safe is to put mining in Aotearoa under public ownership and workers’ control.
Posted by Dave Brown at 5:45 PM