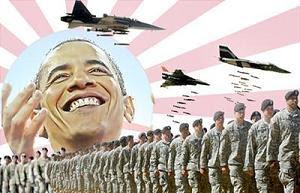 As many left organizations have already stated,[1] Obama’s so-called “health care reform” bill is totally unsupportable. Sources as mainstream as PBS’s Frontline series[2] have confirmed that Congress passed the bill only after the health insurance industry spent huge amounts of money making absolutely sure that nothing in it would threaten the industry’s obscene profits. The legislation does nothing to guarantee affordable access to actual health care services, or to change the US’s costly, inefficient health care delivery “system.” Instead, its principal effect will be to redirect hundreds of billions of dollars away from individual workers and into the already bulging pockets of private, for-profit health insurance companies.

We will not repeat here all of the details about the bill’s shortcomings that have already been discussed elsewhere.[3] What we want to do is hit the highlights, and then make a few additional points that, in our view, have not been adequately emphasized by other commentators on this issue.

The bill requires people to purchase health insurance, but does not require employers to provide it. Moreover, the bill does nothing to guarantee that the insurance policies which people are able to buy will be affordable, or that copays and deductibles will be low enough to enable people to get access to health care if they need it. The highly touted subsidies for low-income people (which are, in effect, subsidies for the health insurance industry) will be available only to the lowest-income layer of the working poor; everyone else who does not have access to an employer-subsidized group policy will face a choice between buying expensive individual health insurance or paying a penalty.[4]

Even for the people who do receive subsidies, there is no mechanism to ensure that after paying their share of the cost of health insurance, they will have enough money left to pay for deductibles and copays – which the legislation allows insurers to set at whatever level they wish. The requirement that people with pre-existing conditions be allowed to buy health insurance does not ensure that the insurance companies will not cancel such people’s policies, or raise their premiums sky-high, if they start to need expensive care.

One of the bill’s provisions is particularly ironic. It requires insurance companies to allow existing policyholders to purchase coverage for their children until age 26, an additional three years over the previous cutoff. The only reason this was even an issue in the first place is that between the skyrocketing cost of higher education and the high rate of unemployment among youth, more and more young people are being forced to remain economically dependent on their parents after they complete their education. Many recent high school and college graduates cannot find a decent job (or any job at all), and those who do find work are often so heavily burdened with educational debt that they cannot cover all of their living expenses. This aspect of the bill may be helpful to some families – particularly relatively privileged workers whose employers subsidize their family’s health insurance – but they would not need that help if it were not for the decline of the US economy and the attacks on public education and workers’ standard of living. Meanwhile, those whose employers do not provide health insurance subsidies for dependents, and those who do not have health insurance at all, will not be able to take advantage of this provision, even though their young adult children are even more likely to be without health care coverage.

Now for the broader perspective. First, by cementing the private, for-profit health insurance industry firmly into the system, and giving it billions of additional dollars to spend on “campaign contributions” (bribes) and “political advertising” (propaganda), the legislation makes it even less likely that any meaningful change in the private, for-profit nature of the US health care system will be possible in the foreseeable future. Thus, this bill cannot be supported as a first step in the right direction. On the contrary, it virtually guarantees that the health care system in the US will remain one of the most backward in any highly developed country.[5]

Second, given that this bill’s principal beneficiary is the health insurance industry and the other big players in the for-profit health care industry (i.e., hospitals and drug and medical equipment manufacturers), it is important to understand why the Republicans in Congress – who normally (like the Democrats) side with big business and the profit system at every opportunity – nevertheless opposed this bill. Marxists and even “progressives” should have no illusions that the Republicans’ opposition must mean that the bill does something right. Rather, the Republican opposition to the bill was a pure act of political gamesmanship. As the Republicans anticipated, the bill has infuriated and energized the extreme right-wing “Tea Party” political milieu, particularly because of its mandate that everyone purchase health insurance whether or not they need or want it. The Republican opposition to the bill had less to do with the legislation’s actual content than it did with Republican hopes that when the “Tea Party” types go to the polls in 2010 and 2012, they will reward the Republican Party by voting it back into office.

Finally – and here is the only silver lining in the cloud – there is a lesson to be drawn from this experience. The workers and their “progressive” petty bourgeois allies who wanted real health care reform are furious that Obama could not get Congress to pass even minimal reform proposals as the “public option,” and that he was willing to sell out women’s reproductive rights and the rights of immigrants in order to achieve a purely political victory that does nothing to help the people who voted for him. This gives the Marxist left an opportunity to expose the Democrats, to urge workers to break with them and form an independent fighting workers’/labor party. Ultimately, the health care reform debacle pounds more nails into the coffin of workers’ illusions in Obama and the Democratic Party, removing another roadblock to understanding that nothing short of a complete overthrow of the profit system is capable of achieving progressive goals such as universal, meaningful access to health care.

In short, the big bourgeoisie just laid down the law. No health care for the masses. So long as the rule of the capitalists continues, working people will not get adequate quality health care for all. Health care will not be won in the halls of Congress; it will be won only in hard-fought battles at the point of production. This will require mass strikes, coordinated across industries. Instead, our union “leaders” are busy negotiating away our health benefits and those of the new hires, thereby breaking worker solidarity between the young and the old.
True, the system is strangling on its own incompetence, but it needs a little kick over the edge. That kick can only come in the form of the self-organized working class creating new organs of democracy and action – at every job site, in every office, factory, school, and college, and in the community. Workers at the point of production organized can stop capitalism in its tracks, reorganize the economy and provide quality health care for all. We need strikes for health care. They may start as economic strikes demanding better working conditions for nurses or decent benefit packages for industrial and service workers, but they will only win when they become both generalized and political, embracing demands such as: