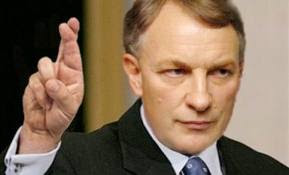 Labour Party Leader Phil Goff hoping he won't get his balls barbecued
Labour's new policy on pensions steals the extreme neo-liberal ACT party's policy of making workers work harder,  longer, and die sooner. Pushing out the age of retirement from 65 to 67 is an open attack on the working class. To get elected Labour has abandoned its class roots and openly appeals to international finance capital to allow Labour to manage its affairs in NZ. It's another lurch to the right in response to a deep crisis echoing the 1980s crisis management at the expense of workers. Labour wants to make workers' pay for NZ's economic crisis in the same way as so-called 'socialist' parties in Greece, Spain, Portugal and Ireland are making workers pay for the crisis of international finance capital.

Labour’s commitment to neo-liberalism was declared in the 1980s. The National Government Prime Minister Muldoon's response to the deepening international crisis in the 1970s was to reinforce protectionism. He refused to concede control over NZs economy even to the point of the threat of
massive capital flight. Not because he was pro-worker but because he was for the protection of farmers from rising world prices for energy etc. Hence the 'think big' economic nationalist policy of self-reliance which ironically echoed that of the First Labour Government. NZ became a pariah for international finance capital. When Labour was elected in 1984 it found itself facing a double global structural crisis and a collapsing NZ economy.

Labour became the Government without declaring to its working class supporters that it would shortly adopt the shock therapy of monetarist deregulation. It claimed it had no option because of a crisis of confidence in the NZ economy on the part of international capital. 'Rogernomics', as it came to be called after Finance Minister, Roger Douglas, was the policy of international finance capital (neo-liberalism) designed to destroy protectionism and privatise public assets. It was driven by the crisis facing global capital of falling profits. Douglas prepared his plans as early as 1980 as anyone who read ‘There Must be a Better Way’ knows. Labour had the unions in its pocket so by the time its so-called ‘red’ [pro-Moscow 'socialist'] leaders woke up under their beds it was too late. They were rewarded by Labour stripping the unions of basic rights just before the 1990 election. The left split to form the New Labour Party while many workers refused to vote Labour. Labour was defeated and the 1990s became a decade of National-led governments that furthered the neo-liberal plan of deregulation.

Labour was re-elected in 1999 for 3 terms but did damn all to reverse its sell-out to monetarism of the '80s. It reformed the Employment Contracts Act to restore the 'balance of power' between employers and unions but the unions remained hollow shells and never recovered their mass membership. Labour had to live with the neo-liberal parameters it imposed in the 1980s. Its ‘rescued’ some privatised state assets like AirNZ and NZRail but for the sake of business not workers. State provision of basic infrastructure has always been the role of the state in NZ as a subsidy to a weak national capital. So basically Labour accepted the neo-liberal ‘settlement’ of the 1980s and imposed further limits on the sovereignty of parliament through fiscal and monetary policy constraints.

This is why it no longer has the tools (or the balls) to tackle neoliberalism and opts for fake ‘tough’ options like making workers work harder and longer. Labour’s tax adjustments are fiscal fiddling with steeply regressive taxation and the widening income gap. Labour introduced the Goods and Service Tax [GST] in the '80s as part of the neo-liberal shift of taxation from capital to labour. Taking GST off fresh fruit and vegetables will be eaten up by inflation in no time. The Capital Gains Tax [CGT] is another grim joke. It won’t do anything to stop speculation or boost productive investment in jobs. That’s why Labour’s excellently produced election advertisements try to cover up its historic sell-out to finance capital with clips from the Joe Savage and Walter Nash eras from 1935-1949 falsely claiming to be going back to Labour’s social justice roots.

Labour was never a socialist party. It was formed in 1916 after the historic defeat of militant labour in 1913 to coopt the labour movement into parliament. But under pressure from unemployed workers and destitute farmers during the Great Depression of the 30's the First Labour Government came to power on a radical populist policy of protectionism and income redistribution. But after the Lange Government's collapse into deregulation in the 1980s Labour no longer has any ability to control the economy let alone redistribute wealth. This latest sellout in the face of the current crisis to do the bidding of international finance capital marks Labour's total bankruptcy as a social democratic party with any pretence to serving the interests of the working class.

Just as we see the masses around the world turning their backs on parliaments and the bankruptcy of social democracy, mobilising on the streets and Liberation squares to take their futures into their own hands, young people and workers are doing the same in Aotearoa. When it is clear that parliament is talk shop for the bosses and the state the committee to manage the affairs of the ruling class, the people are waking up to the reality that they have the power to make change by uniting, organising and campaigning for what they need.

The Arab revolution that stood against political dictatorships sparked off the indignatos in Spain and Greece to stand up against the dictatorship of finance capital. The first tentative demand to emerge form the #OWS is the Robin Hood Tax but already it's clear that even to make this demand the movement needs to unite with workers everywhere and build for a general strike to bring down the capitalist regimes and open the road for real democracy. The general strike called by #OccupyOakland for November 2 follows closely on the 48 hour general strike in Greece. There will be many more. Based on collective consciousness, action and self-defence this can be the beginning of the revolution. After Robin Hood comes the trial of the Sheriff and then the deposing of King John.
Posted by Dave Brown at 1:53 PM