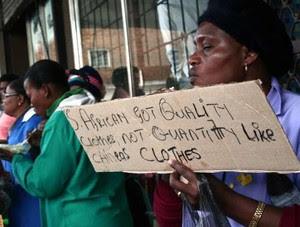 55,000 clothing workers in South Africa went on strike for 10 days in September this year. At a time other workers were demanding 15 percent wage increases and winning 13 percent, the leadership of the SA Clothing and Textile Workers Union (SACTWU) were only demanding a 7.9 percent increase. At the time, official inflation was at around 10 percent, while workers’ inflation was substantially more.

The biggest player in the clothing industry is the Seardel group which employs about 17,000 workers. The Seardel group has a 70 percent stake held by HCI, a company controlled by the clothing union, SACTWU. Despite this major shareholding, a company which was part of the Seardel group, called Frame Textiles, which was a huge player in the production of blankets and fiber for the local industry, was forced to close and 1,400 workers were retrenched earlier in this year. State-of-the-art equipment is now mothballed and being sold off to clothing capitalists elsewhere in the world.

When the bosses started off with a 0 percent offer, they were deliberately forcing the wage negotiations with Sactwu towards a strike. The bosses deliberately linked their wage offer to workers losing overtime pay if the stayed absent, even if they had a legitimate medical certificate. The question is why were the bosses so bold? There is a strong interconnection between the clothing retailers and the clothing manufacturers. Normally this time of year the factories are bursting with orders and many work overtime. Why is this year different? The clothes had to be ready for the shelves within weeks. The bosses could only have played hardball if the retailers have already made plans to source their clothing from elsewhere (eg cheap Chinese goods). This means that there was open collusion between the clothing and retail bosses.

Many of the clothing and retailers are directly and indirectly owned by international banks. For example Foschini is owned by Investec, JP Morgan Chase, State street, Standard bank, Santam. Mr Price is owned by JP Morgan Chase, Northern Trust, State Street, Old Mutual. Wooltru is owned by Old Mutual, RMB, Deutsche Bank. All these international banks are in a deep crisis of having too much capital and not enough returns. The Chinese worker earns R100 (about 8 British pounds) per week while the local clothing worker earns about R600 (50 British pounds). The US banks are major investors in China and use it as a giant sweatshop. Despite the flood of cheaper Chinese produced goods, the retailers have not dropped their prices. In other words, the shift to China produced goods is a means of the major banks to increase their profits. They are not happy with 500 percent profit from the worker in South Africa, they want 1000 percent plus increase in profits. The international banks, who have shares in the retailers and the clothing companies, planned to shut the industry down and destroy the lives of over 300 000 people who are directly dependent on the clothing workers!

During the strike, a temporary agreement to limit ‘Chinese’ goods for 2 years, expired. It was clear that the bosses were planning mass retrenchments and were wanting to use the strike as a platform to start this process.

The bosses did not expect the workers to show the level of unity and determination. The entire clothing sector was shut down. The workers forced their leaders to call a secondary strike in the textile sector and a further 15 000 workers were preparing to join the strike when the bosses capitulated and gave in to a 7 percent increase for workers. The workers had already sent workers to Cape Town and Durban docks to temporarily block ‘Chinese’ goods for the duration of the strike. The clothing workers made it very clear that they were in full support of the Chinese worker but the capitalists were planning on bringing in scab products during the strike to keep their production going. The workers in Durban docks had in principle agreed to discuss the blockading of the docks when the strike ended. A blockade of the harbors were thought of because by the time goods left the factories in China, the Chinese worker would have been paid and the full loss would have been borne by the capitalists.

During the strike workers occupied the factories each day, escorting scab workers out by the front gate, and then strikers would leave the factory premises. In many cases police came to the gates to support the bosses. Even in the supposedly worker-owned Seardel group of factories, the police, armed with shotguns clashed with workers (we have some video footage of this). 20 workers were arrested in Ladismith on charges of public violence after they clashed with scabs.

The strike also coincided with the Congress of SA Trade Union Congress in September; thus all Sactwu delegates were strikers and they forced a resolution for a solidarity strike to be adopted.

This was the first time in the history of strikes within the clothing sector that there was an almost total shutdown of the sector.

Sactwu has invested millions of workers money in HCI, and thus in the Seardel group. HCI is an example of supposed ‘black economic empowerment’ but this company is still tied hand and foot to big capital, through the loans it had to make just to get started. HCI had to make loans to buy out a major share of the clothing capitalist, Searll. Thus if the Seardell group now closes, it will be workers’ money that will go to repay this loan. The workers would lose twice: first in loss of jobs, secondly in repaying the international banks. This is similar to what happened to General Motors in the US, where the government took over the company but stole workers pensions to repay JP Morgan Chase. 40,000 workers were still retrenched. The only way is to expropriate all the large clothing manufacturers, retailers and the banks, without compensation, and to place them under workers control. This is the only way for real empowerment of workers. A simple ‘nationalization’ like Obama did to GM, will only bail out the banks and smash the unions.

The low wage demand and the conduct of the union leaders in the strike shows that they were openly acting in favor of the bosses; it is time to choose a new leadership from those who proved themselves in the recent strike. It is time for real working class independence from the capitalists. The principle of the right of instant recall of any worker leaders as well as the pay for union officials to be limited to that of the average in the industry, should be seriously considered.

But as the recent strike and 40 day occupation of the Kraft-Terrabusi food factory in Argentina shows, it is important for workers to begin to organize politically as a class, independent of the mainstream parties, and on an international basis. [The factory has re-opened with the workers leaders dismissed, with the agreement of the union leaders, and under military police guard of production]. While big capital operates globally, workers are still divided locally and according to trades.