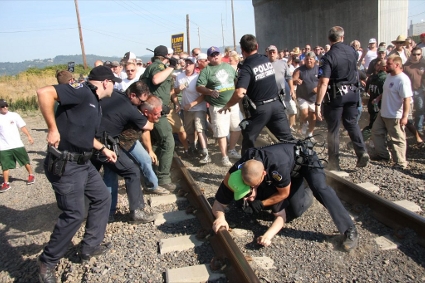 I
ILWU picket in action
The Million Worker March (MWM) organizers and activists call upon all workers organized and unorganized and the unemployed to join and defend the Occupy Wall Street (OWS) movement. We extend the call to anti-war, immigration rights, environmental and social justice activists to join this movement which could replicate the “Arab Spring” here at home.

The MWM, initiated by the International Longshore and Warehouse Union (ILWU) Local 10 on October 17, 2004 at the steps of the Lincoln Memorial in Washington D.C., advanced the slogan “mobilizing in our own name” independent of the two Wall Street controlled political parties to address the economic crisis of working people in which the vast majority are under siege financially.

All important social movements, which occurred in this country, were started from the bottom up (rank and file/grass roots) and not from the top down. The MWM’s mission statement speaks to how “. . . a handful of the rich and powerful corporations have usurped our government. A corporate and banking oligarchy changes hats and occupies public office to wage class war on working people. They have captured the State in their own interests.” They represent what the OWS activists call the 1%, otherwise known as the ruling class.

Like the MWM, the OWS has emerged at a time when the two corporate controlled political parties are preparing for the presidential election; a smokescreen where billions are spent to promote a top down and false ceremony of democracy.

Like the MWM, the OWS will be criticized for having demands that are too broad. We have endured more than 50 years of corporate assault on working people, social services, jobs, wages, pensions, health care, public education, and housing. The pursuit of endless wars, the lack of a comprehensive immigration policy and the erosion of the environment in pursuit of corporate greed, makes it impossible to address all of these issues in a sound bite. Yet one thing is crystal clear, OWS conveys a definite anti-capitalist message. It is being expressed to the entire world at the “temple” of American Capitalism, Wall Street. The OWS, while now a major protest movement against the capitalist elites, must continue to deepen, expand and become a direct challenge to corporate power. Class warfare demands fighting on multiple fronts and it all leads back to Wall Street. While the officialdom of labor has given verbal support to OWS, the rank and file possesses the real power of the labor movement. It is only through rank and file unity that labor’s true power can be realized in this OWS movement. Workers can take action at the point of production and service as well as put people in the streets.

We must be mindful of attempts to co-opt this movement. Let us not forget the action of the Democratic Party and its surrogates within AFL-CIO to pressure Wisconsin unions not to initiate any General Strike actions in opposition to Governor Scott Walker’s plans to eliminate collective bargaining for State workers. Wisconsin workers were limited to circulating petitions to recall targeted State republican elected officials. This took away labor’s only real power, the ability to withhold its labor in defense of collective bargaining.

ILWU Local 10’s Executive Board has adopted a Resolution to join and defend the OWS and called for other longshore locals to do the same. More importantly, Local 10 is connecting the OWS movement with the Pacific Northwest dockers struggle with EGT in Longview , Washington . (EGT is an international grain exporter which is attempting to rupture longshore jurisdiction.) The driving force behind EGT is Bunge LTD., a leading agribusiness and food company, which reported $2.4 billion in profits in 2010. This company has strong ties to Wall Street. This is but one example of Wall Street’s corporate attack on union workers.

On October 12th, the vice-president and secretary-treasurer of ILWU Local 21 in Longview , WA , who are engaged in battle with EGT, were allowed to speak by the organizers of “Foreclosure on Wall Street West ”. They explained their struggle to several hundred people attending the rally that took place in the San Francisco financial district. This is an important and strategic show of solidarity between labor and OWS.

It was Black trade unionists that conceived and launched the MWM. Black workers and other workers of color should play an integral role in expanding the power and influence of OWS. The Black unemployment rate is 24% and growing. This needs to be a part of the discussion of the peoples’ assemblies as it concerns empowering this peoples’ movement.

Working people need to have a political expression of our own which is an alternative to the U.S. corporate sector that both the Democrats and the Republicans represent. The timing of the MWM in Washington was to prepare the beginning of a fight-back precisely because the agendas of two political parties, acting as one, the corporate agenda of permanent war, destruction of all social services, Jim Crow and a relentless assault upon working people.

This is an opportune moment for rank and file working people to forge a mass movement for fundamental change. Rarely has the importance of unity in struggle been more compelling along an axis of class independence.

Only by our own independent mobilization of working people (99%) across America , can we open the way to addressing a peoples’ agenda. The MWM and OWS are both about building grass roots and rank and file anti-racist unity “forging the fight-back” on all governmental and corporate policies influenced and or directed by Wall Street.

Let’s take it to the corporate state, Let the 1% take the weight