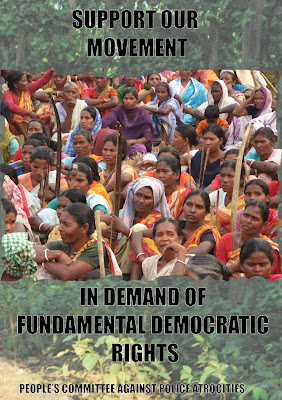 Emboldened by the debacles suffered by the Stalinist CPI-CPM in Nandigram and Singur, the right wing bourgeois parties TMC, Congress and BJP all have sought a new opportunity in Tribal unrest in Lalgarh to destabilise the Stalinist Government in West Bengal. The extreme left wing of Stalinists, the CPI (Maoist), has also joined this offensive, forming an armed wing of this general assault. This they have done obviously without caring that the same would only assist the designs of right wing bourgeois parties.

While assisting this right wing offensive of the Congress and TMC combine, against the Stalinists, the Maoists through their leader Kishenji, are quoted to have claimed, in a recent statement, that Lalgarh is second ‘Naxalbari’.

However, the claims of Maoists, cannot prevent one from seeing that the whole gameplan is carefully designed by the right wing bourgeois parties. It is not without meaning that the central government has made it clear that the responsibility of the armed operations would be of the State Government and central forces would only assist them. It must be assessed against the backdrop of the political scenario, where till recently the Prime Minister in Congress-led Government at the centre, was declaring himself that the biggest threat to the security was coming from ‘Naxal violence’. It is the Congress government at the centre, which immediately after its re-election to power, imposed a ban upon the CPI(Maoist).

Now, hoping to secure a left face for its offensive and simultaneously deepen the crisis of the CPM government in West Bengal, it is pushing hard the CPM led Government in West Bengal to act against the tribal uprising. Though TMC and corporate institutions had been demanding the dismissal of West Bengal Government by the centre, but the central government has carefully chosen to pursue a more cunning policy of using the government of West Bengal to spearhead the move against the tribal unrest and extreme left wing Maoist-Stalinists, by keeping it under the threat of dismissal.

It is this political game of sections of bourgeois, in which Maoists are playing a stooge role. Maoist violence is nothing but a proxy tool being used by other sections of the bourgeois, aspiring to capture power in the State. While Maoists profess abstention from all electoral contests, the real beneficiary of the situation, are the right wing bourgeois parties like TMC, Congress and BJP.

After TMC joined the Government at the centre, the Maoists appealed to its to oppose the repression by the armed forces in Lalgarh, reminding it of the support and role they played in its accession to power, but instead TMC called for dismissal of the elected government and imposition of President’s rule in the state. TMC took exception to Congress’ statement connecting it to the Maoists and demanded that the CPM be disarmed by the Central forces in West Bengal. TMC only said that it was not consulted before sending central forces to the State.

It is none other than the Stalinist government of West Bengal itself, which has prepared the path for strengthening of right wingers in the state, as it followed the pro-investor, neo-liberal policies in the state, shooting down the peasants in Nandigram and Singur, who resisted this policy. This gave the rabid right wingers like TMC, BJP and Congress, an opportunity to speak for the tribals and against the government and re-cast themselves as messiah of those oppressed at the hands of the government. They got even more legitimacy as the Maoists, the left wing Stalinists, declared themselves the allies in their campaign against the Stalinist government. The Central and State governments, on their part, sought a pretext in Maoist presence to unleash state terror and repression upon the tribal peasants in the region.

While capitalism could support a welfare state, the Stalinists - the left wing of the bourgeois, ruled the state for 32 years continuously, but with its forced dismantling, coupled with ever larger offensive of neo-liberalism, the Stalinists have little option, but to assist capital in its pursuit of ruthless intrusion with extreme exploitation of the peasantry, deprived of all safeguards except physical resistance.

The imperatives of holding the bourgeois power in the name of democratic stage of revolution, have backfired on the Stalinists. The Resistance from the peasantry under the pulverisation of capitalism, is now directed against the Stalinists in power in West Bengal. Suffering till now, from the underdevelopment of capitalism, the peasantry, tribals and other oppressed sections in West Bengal now confront the rabid intrusion of capitalism into the virgin lands. This leads to an explosive situation.

The inability of the Stalinists to understand the nature and development of capitalism in the former colonies like India, with historically belated development, leads them directly to the fatal embrace of the Menshevik-Stalinist ‘two stage theory’ of revolution. Prepared for a long term organic and peaceful capitalist development, the Stalinists running the bourgeois governments, are surprised at every step by the abrupt, and brutal intrusion of capitalism, like in shock waves, here and there. Having no program to confront this reality, these Mensheviks are being pushed aside by the course of history. Not in a position to stand with the oppressed people, the opportunists find themselves, by default, in the arms of the bourgeois establishment, perpetually hostile to the working people.

It was the sixth congress of Comintern under Stalin, which after the crushing of revolution in China, had adopted the line that communist parties may form local governments within the structures of bourgeois state power. This was sheer adaptation to the defeat of revolutions, the world over and a consequence of the abandonment of the project of world revolution by Stalin. The idea emerged out of the failure of Stalinist Comintern to understand that neither there can be a peaceful path of development of capitalism in colonial countries, nor a capitalist road to socialism. The Stalinist illusion of existence of a ‘progressive’ section of national bourgeois in backward countries, which it borrowed from Menshevism, continues to haunt its parties till date, making them a virtual cohort of national bourgeois.

Despite all their rhetoric against the CPI-CPM, the Maoists are rooted in the same politics of Menshevik ‘two stage theory’ and the limited nationalist viewpoint of Stalinism, in seeking ‘progressive’ sections of the national bourgeois, collaborating with them in democratic revolution.

Claiming to be in favour of oppressed and exploited, Kishenji, the Maoist leader in Lalgarh has called for opposition to Industrial Zones being set up in West Bengal, thereby advocating the interests of disgruntled petty bourgeois mass. The opposition of Maoists is directed against the intrusion of capitalism and industry in the agricultural periphery of the state. Maoists think that capitalism would disturb the old heaven of peasantry, through confiscation of the lands for industrialisation. Their opposition to Capitalism is not from the revolutionary point of view of working class, but from an obsolete peasant viewpoint. Creating more illusions, Kishenji has also demanded that the capitalist state must take care of welfare of the tribals and peasants.

The much trumpeted struggle of ‘Naxalbari’, which arose out of the sporadic peasant uprising of 1967, is the classic example of the bogus political perspective of Maoists. Allegedly taking inspiration from the ‘Chinese Path’, which they had always misunderstood and misinterpreted, the Maoists, in the wake of peasant unrest of 1967, declared that the peasant uprising of Naxalbari was the signal of a revolution in India. Instead of forming a proletarian axis by arming the working class and the youth with revolutionary ideas and calling upon the peasantry to oragnise around it, the Maoists took to premature armed struggle. The misadventure turned out into a complete fiasco and the wave of peasant upsurge soon ebbed down in absence of a working class axis.

The misled move, however, took its toll upon the lives of thousands of young communists, before going down in history as an infantile attempt. Only after a huge damage was caused, the policy came under severe criticism even by those who took active part in it. After failure of Maoism in Naxalbari, Maoists disintegrated into a wide spectrum, from supporters of ‘individual annihilation’ to advocates of a ‘mass line’, but the fundamentals of their Menshevik politics, remained the same. The criticism, never went beyond the superficial tactical issues, while the Maoist stream, as a whole, remained firmly rooted in the soil of peasant politics, bye-passing the working class and oriented towards the sections of national bourgeois.

From Naxalbari up to Lalgarh, the underlining idea of Maoists, stems out of a confused and unrealizable concept of peasant revolution in the country, led by Maoist party, which according to them would bring into power a bloc of four classes- the nationalist bourgeois, petty bourgeois, peasantry and workers. The working class in their estimation is too weak to take power, thus socialism remains completely out of question, the stage is set only for a democratic revolution, which would facilitate the growth of capitalism with a human face, for several decades. After completing the democratic stage of the revolution, in their view, only the question of socialist tasks would be posed, setting the conditions for a second stage revolution.

In the estimation of both of the Stalinists and Maoists, working class is too weak in all backward countries, including India, to claim power for itself and thus the bourgeois is legitimate claimant to power and an indispensable partner in the bloc of classes, which would rule during the stage of democratic revolution. Both of them agree that the democratic tasks of the revolution cannot be accomplished except through this collaboration with the sections of the bourgeois.

As the events around Lalgarh have clearly shown, both the Stalinists and Maoists, remain attached with this or that section of the bourgeois and do not crave for political independence from the bourgeois establishment as a whole. Both of them preach the working class to collaborate with ‘progressive’ sections of bourgeois in the name of its feudal and colonial past. Needless to say, none of them has a program for independent mobilisation of the working class and behind it the peasantry, tribals and other oppressed sections, towards a socialist revolution.

The task before the working class in India is to counter Stalinism and Maoism, while organising itself and the peasantry, tribals and other oppressed mass behind it, around the program of a socialist overturn.
Posted by Dave Brown at 3:38 PM