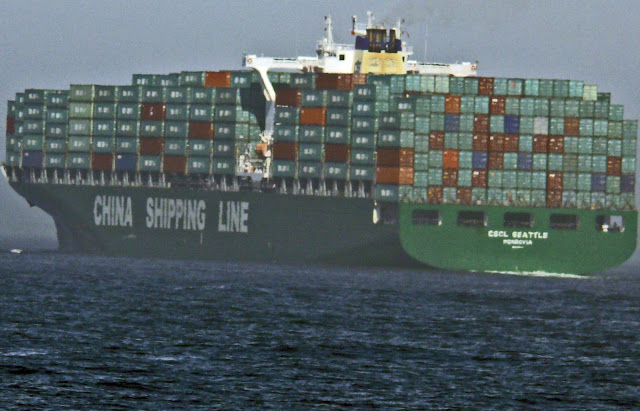 The debate about foreign ownership is mainly about who owns and controls NZ’s economy. It is linked to another debate about rising social inequality. For the NACTs [National/ACT Govt] and the NZ comprador ruling class NZ’s growth had always been determined by its ‘dependency’ on Britain, the US and Australia. The best NZ can hope for is to be competitive in the global economy so that ‘growth’ will enrich the compradors and buy off working class discontent. For the left the issue has always been economic independence; how to become self-sufficient and egalitarian in sharing the national wealth. But it is a myth to say that NZ has been decolonised, egalitarian and even ‘imperialist’. NZ was always foreign owned and controlled since its European settlement. Inequality in NZ cannot be understood unless you understand why NZ is a capitalist semi-colony. The colonial institutions have become semi-colonial institutions. NZ is formally a sovereign nation yet its semi-colonial dependence is even more obvious today than any time in its history now that China looms as an emerging imperialist power. NZ’s decolonisation is still ahead of us. Our task is to fight for that independence, not as a capitalist nation, but as a socialist republic.


Simon Collins series of articles in the NZHerald provides plenty of evidence for the social effects of rising inequality in NZ. We get first hand information about the extent of poverty and its impact on health, education and on the lives of the poor. The first article reported Dr Fiona Cram’s research that shows that, despite the ravings of Michael Laws about ‘feral families’, poverty and discrimination are the main causes of ‘Maori Child Abuse’. Collins claims that inequality is recent. This is the result of historical amnesia. The post-war boom revived the myth of NZ as egalitarian, founded by the liberals in the 1890s. Fabian reformers like WP Reeves Labour Minister in first Liberal Government of the 1890s and socialists like Harry Holland, leaders of the First Labour Government in the 1930s, are cited as the epoch-making giants of social democracy that allowed NZ to abolish the evils of social classes.

In reality, NZ was always an unequal society and the 1890s and 1930s were but short bursts of social reform in an otherwise bleak history of racial and class inequality. It has taken the period since the 1970s to reawaken NZ to the existence of classes, and the continued impoverishment of many working class families. This is because crises are the norm in NZ. The first was the Long Depression of the 1880s which brought the colony to virtual collapse and a Liberal Government backed by workers and landless farmers stole millions more acres of Maori land to settle the landless and expand the mines. The second was the Great Depression of the 1930s that saw the real unemployment rise to 30% and thousands of poor farmers walk of the land. This brought the Labour Party to government for 14 years on a program of economic regulation and protectionism. The current crisis began in around 1973 during the Third Labour Governments term with the oil crisis. This brought the post-war boom to an abrupt halt and proved yet again that the booms were hot air balloons in the long downturns in NZ history.
End of the Postwar Boom

But this time the downturn was more permanent. NZ had exhausted its ability to develop behind tariff barriers to protect local manufacturers from overseas competition. Local firms like Watties and Fletchers were now national monopolies and had to expand offshore or die. Foreign branch plants like Borthwicks, ICI and Lever Bros were dominant in their sectors and demanding the right to repatriate profits to their multinational headquarters. The global downturn in pastoral exports now converged with the demand by capital to open up the economy to the global market. NZ manufacturing had outgrown the local market and to survive had to compete internationally. The National Party under Muldoon had tried desperately to insulate the economy from the global crisis and globalisation. Then as if to prove that the Labourite ‘classless society’ was a myth, it was the Labour Government that was forced to undertake the shock therapy of killing off its own protectionist heritage. This proved that historically the ideal of class equality was always dependent upon the capitalist class profitability. Equality was a luxury that only the bosses could afford.

The rise in inequality that resulted from Rogernomics, Ruthonomics and the return of National to office in 2008, proved beyond doubt that NZ remains essentially a semi-colony in which the imperialist powers plunder raw materials and labour power to extract their super profits. NZs economy is devoted to ‘rip, shit and bust’ - ripping out raw materials, depositing shit across the rest of society, and going bust as it gets deeper in debt. Its role is as a provider of raw materials and food for the imperialist countries. The period between 1935 and 1970s when NZ was a ‘rich’ country is an aberration. Economic nationalism was always a temporary refuge in response to depression and war. The 100 years before 1935 and the 40 years since the oil shock of 1973 proves that in the long run NZ is a weak, dependent semi-colony on Britain, the US, Australia and now China. That’s the story. It explains why ‘protectionism’ was short-lived so that since 1973 NZ has rapidly slid down the developed OECD countries league into so-called ‘third world’ status.

The definition of a semi-colony is a country that is owned and controlled by imperialism but which is politically sovereign or independent. But what does political sovereignty amount to when the key sectors of the economy are foreign owned and controlled? It means that the nation state is nothing but the agent of imperialism and the national capitalist class a comprador class of agents of imperialism. That means that foreign capital owns the key sectors of the economy. The value that is created by the working class is largely exported as profits. The biggest drains are the Big four Banks owned by Australian banks which made $32billion in profits in 2011.

Brian Gaynor reports: “The Bank of New Zealand was sold to National Australia Bank (NAB) for $1.5 billion in 1992. Since then BNZ has distributed $5.2 billion in dividends to its Australian parent and is now worth an estimated $7.2 billion based on its 2010 net earnings of $602 million and a price/earnings ratio of 12. Thus NAB paid $1.5 billion for BNZ and the latter has delivered total shareholder value of $12.4 billion to its Australian owners since late 1992. .. Telecom was sold to overseas interests for $4.25 billion in 1990 and since then has made distributions to shareholders, in the form of dividends and capital repayments, of $14.6 billion... an estimated $8.8 billion of these $14.6 billion distributions went to overseas shareholders.”

Gaynor summarises the situation: “A prosperous free enterprise economy is based on a high domestic savings rate and a strong productive sector that is well governed and mainly domestically owned. Australia and other above-average growth countries have these characteristics but New Zealand doesn't. Our low savings rate and under-investment in productive assets have hindered long-term stability and growth. For example, almost all the assets owned by the 10 largest ASX listed companies at the end of 1987, which had BHP in the top spot and Westpac at number 10, are still Australian-owned, whereas our largest listed companies at the end of 1987 were as follows: Fletcher Challenge (paper, forest and energy assets in foreign ownership), Brierley Investments, NZI (Australian-owned), NZ Forest Products (Graeme Hart-owned), Bank of New Zealand, Petrocorp (bought by Fletcher Challenge and on-sold to overseas interests), Lion (Japanese-owned), Carter Holt Harvey (Graeme Hart), LD Nathan (merged with Lion and now Japanese-owned) and Robt Jones Investments (Hong Kong-owned). Almost all of the assets owned by the next 10 largest NZX companies in December 1987, with the notable exception of the pre-split Fisher & Paykel, are also overseas-owned. These include Magnum (with its major operations Dominion Breweries and Countdown supermarkets now foreign-owned), Progressive Enterprises (Australian-owned), Wilson & Horton (Australian-owned) and INL (assets sold to Fairfax).”

So it’s this foreign ownership that determines how the relations between classes in NZ work. Income or wealth inequality is a symptom of this. The ruling class wealth increases in relation to its role as agents of international capital which requires NZ to be competitive. This means cutting costs, at all costs. The old class of national industrialists like Fletchers, Watties, Lion Breweries, Fisher and Paykel etc have been replaced as the dominant fraction of the ruling class by the upstart vulture capitalists, notably Brierley, Fay and Richwhite, Bob Jones, Alan Gibbs, Infratil’s Morrison, and CHH’s Hart, who have asset stripped uncompetitive firms and restructured them as international corporations with head office offshore. The second rank comprises the financial and property parasites who speculate on already produced value. Most of their combined wealth is invested offshore and is part of NZ’s biggest exports – profits. So while NZ industry has been restructured it is mainly at the expense of the working class.

Jobs, wages, taxes, social spending all have to be cut. As industry is restructured plants are closed down and many jobs are lost. Government legislates for reforms to implement these cost cuts. Thus since the deregulation of the economy under Labour in the 1980s we have seen these policies pursued by every government, cementing in the ‘openness’ of the economy. None of this was a surprise and was predicted by Marxists in the 1970s and 1980s. Today, it is an indictment of the lack of any serious political left in this country that a NZ Herald journalist Simon Collins has to rediscover the colonial causes of inequality in a series of articles. Yes it is colonisation that is the structural cause of poverty and discrimination and Maori child abuse.
Social Democracy bankrupt

That the Labour Party is now a Blairite party is evident in David Cunliffe’s comments on Collin’s articles. He criticises Collins for not coming up with solutions. Cunliffe’s solutions are a tame recycling of Blairite reformism. It boils down to NZ becoming more ‘competitive’ which means that workers have to be even more exploited. This is a recipe for increasing inequality as the share of value expropriated by the capitalists compared to that retained as wages by the working class constantly increases.

Revolutionary communists argue that social democracy is being exposed as bankrupt by the global economic crisis and will split as the left leaves the bankrupt Labour Party to join a new revolutionary Workers Party. Workers of the world are ready for revolution. All we need is the revolutionary party and program that opens to road to socialism.
Posted by Dave Brown at 6:49 PM

Your theory doesn't take in to account settler colonialism. NZ is colonised and you are the colonisers. You can't confuse settlers with compradors! "NZ was always foreign owned and controlled since its European settlement." - Right, obviously because the European settlers were foreign. The reason why the settler petty bourgeois masses reject you is because they know their own class position better than you, they know they have a lot more to lose than their chains.

Settler colonialism doesnt mean that all the descendants of settlers are petty bourgeois and have more to lose than their chains. NZ has a class structure and the big majority of workers are non-Maori. Maori workers are still overrepresented in low paid jobs, but some Maori are petty bourgeoisie. All of these people do not OWN the NZ economy and stand to gain from the overthrow of capitalism.
The point is that all workers need to unite to kick out the compradors and the international finance capitalists who own and control Aotearoa/NZ. In the process the petty bourgeoisie will have to decide which way to jump.