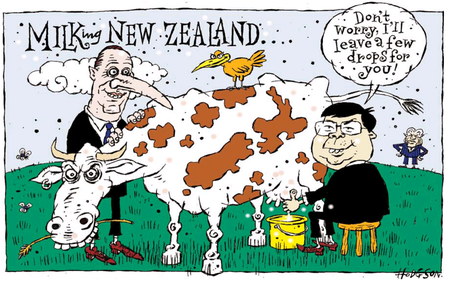 The controversy over the sale of the Crafar farms to a Chinese based consortium has raised both the issue of New Zealand's semi-colonial status and the dangers of semi-colonial nationalism degenerating into racism. NZ is an Anglo/US semi-colony but is now increasingly a semi-colony of China, now New Zealand's main trading partner. The Crafar controversy drags NZ into the worsening imperialist rivalry between the still hegemonic US imperialism and its newly emerging rival, Chinese imperialism. While the NACT Government is trying to keep both rivals onside, NZ workers must refuse to side with both, and join forces with the Chinese and US working classes to overthrow their own imperialist masters.

Typical of the chauvinist anti-China response is that of Tumeke  blogger Tim Selwyn. He is a national chauvinist more typical of the social democratic rather than revolutionary left. He seems to have a thing about Chinese in NZ. That may reflect historic attitudes, his strong support for Mana and the tension that exists between Maori Treaty claims and selling off of land to foreigners all of which needs to be unpacked.

In NZ historically, the white-settler labour movement was anti-Chinese which goes back to the time when British workers were infused with British social imperialism. Social imperialism is that Eurocentric view that non-European peoples need to follow the path to civilisation of the European powers which may take an invasion or a war or two to instil. In China in the 1840s shelling the imperial palace was necessary to open up China to the opium of Western civilisation. At the same time In NZ where Maori were numerically and militarily stronger than the settlers the Church and the Treaty kept the peace until more troops arrived.

It took the militancy of Maori, Irish, Scots, Australian and US workers, whose ‘civilisation’ owed something to fighting the British, and the socialist and anarchist ideology of the late 19th century, to challenge this British chauvinism in the labour movement early in the 20th century. Militancy had to overcome national chauvinism and racism in order to create international solidarity against the bosses.
In NZ the militant internationalists were defeated by 1913 and swamped in the wartime jingoism. The moderates who formed a labour aristocracy better paid (skilled workers these days often mislabelled the ‘middle class’) founded the Labour Party, and retained a pakeha privileged anti-Asian and anti-Maori prejudice. Margaret Mutu recently highlighted the fact that NZ’s skilled immigration policy still favours the ‘attitude of white supremacy'. She implies that this reproduces the white settler racism and chauvinism of old for the same reason – protection of better jobs.

Aotearoa is already sold out

This accounts for the acceptance of favoured historic British, US and Australian foreign investment and control, and the alarm when China enters the field to buy NZ assets. Now that China is becoming an economic power, and obviously seen by the US as a challenger to its Pacific hegemony, there are those in NZ who conflate the historic anti-China racism, with anti-foreign investment.

That is a conflation of a reactionary with a progressive cause. It is reactionary when it blames foreigners for loss of control over the economy, land, jobs, incomes etc and looks to ‘national’ ownership as salvation. It is progressive when it blames foreign imperialism of all nations, and its agents in NZ, the NACTs, the banksters and the vulture capitalists, who as an international ruling CLASS, conspire to increase their control over the economy, land, jobs, incomes etc. at the expense of workers everywhere.

One argument used to rationalise anti-China racism is the supposed advantage of China's cheap labour and cheap state bank loans over its rivals. This is typical of US imperialist anti-China rhetoric which is glaringly hypocritical as the US takes advantage of Chinese cheap labour and state concessions when it invests in China, and at home prints money to rescue its failing banks! The ‘human rights’ argument that China uses cheap or slave labour is equally hypocritical as the NACT regime sells NZ’s comparative advantage as ‘cheap labour’ and compliant unions.

What China gets from its foreign investments

This is a subject hotly debated in Africa where China has moved in a big way in recent years and is now threatening to displace US and EU powers. The West has responded with charges of Chinese colonialism propping up dictatorships with and exploiting land, minerals and labour. Of course African regard this a a huge joke given a history of Western enslavement and colonial occupation over several centuries.

Deborah Brautigam has written extensively on this, in particular on concessional loans and eximbank subsidies. Her main findings are that despite appearances (and being late on the scene) China is doing pretty much what Western powers have done for years - exploiting raw materials (but less labour) at a price roughly comparable with the West. That means investing at a similar rate of return as others and being no more or less 'imperialistic' than its Western rivals. In other words China could not expand at the rate it’s doing overtaking the Western powers unless it is getting 'value for money'.

That would figure since they are all capitalist countries and you cannot grow by printing money without causing inflation. So what we have is China emerging as an imperialist power having accumulated surplus capital from the extreme exploitation of labour (alongside the duty free plants of Japan, Taiwan, US etc in the Special Economic Zones) and clever adoption of new technology, which is now being invested in the classic manner of the European and American imperialists before it in Asia, Africa and Latin America, to plunder the resources of the colonial and semi-colonial (and of course rival EU, Australian and US imperialist) economies to extract super-profits.

So what is new?

The Crafar Farms issue shows that those in the working class most influenced by anti-China chauvinism and racism are those sectors that historically defend their higher paid jobs from the non-European peoples. Those in the working class that oppose China buying the farms in favour of NZ ownership (and Maori ownership) are in danger of getting sucked into this anti-China racism.

When Michael Fay, notorious for making millions from selling off state assets in the 1980s, and running off to live in Switzerland, forms a bloc with Maori iwi leaders this is a fraction of the national capitalists class aligned with imperialism. Fay sold BNZ and Tranz Rail to major foreign corporates. He is part of the vulture capitalists who stripped NZ assets for foreign ownership. The vulture capitalists can’t exist without partnerships with foreign ownership. Why? To survive, national capitalists must become agents of imperialism on its terms and get a small share of the plunder of NZ assets and labour for their efforts. Partnering iwi corporates is merely lining up new players to suck them into the vulture compradors. Think Maori joint ventures in fishing.

The fact is that international finance capital is contemptuous of national borders. It only preaches nationalism and racism to keep the workers lined up behind national borders and ready to go to war to defend this or that imperialist power. That’s why workers as a class have to be even more internationalist than their bosses and not fall for the racist nationalism that divides them and sets brother and sister at each other's throat. The political allies of NZ workers are not their own bosses, but all ‘foreign’ workers. The best ally against Chinese imperialism is not Sir Michael Fay or his token iwi corporate partners but the Chinese working class that fights for workers control of the Chinese economy.

NZ workers should do the same. It’s not enough to demand ‘nationalisation’ since that means the property is controlled by the state which is the state of the ruling class. The fact that China still has land that was nationalised by the 1949 Revolution, but can restore capitalism and emerge as the most dynamic imperialist power proves this. Workers are internationalists; we have no nation as that means merging with the class enemy. The ‘nation’ we defend is that which belongs to the working class and our demands are to expropriate and ‘socialise’ the land, all state assets so they cannot be sold, all major corporate and banks, and put them under workers management and control.

Aotearoa/NZ is a tiny pawn in this Pacific rivalry between the US and China so the only question that should be posed by what passes for the 'left' here is how does the Aotearoa/NZ working class avoid being dragged by national capitalist chauvinists to fight for one or other imperialist power in the new wars that are looming everywhere?

The answer to that is not too difficult - expropriate!