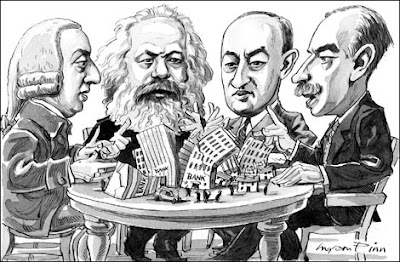 From Left to Right:  Adam Smith, Karl Marx, Fred Hayek, Lord Keynes
The bland morality and statistics approach of The Spirit Level approach to inequality is already at least a half-century behind events. The 1960s in NZ marked the end of the post-war boom and the return of ‘social classes’ once thought to have been banished by the first Labour Government. A number of analyses of the causes of inequality began to be published from that time and continue to this day. Most operated at the same level of analysis as The Spirit Level i.e. measuring the distribution of income and of wealth and tracing its social effects.

By the 1970s Marxist critiques of this sort of distributional analysis were appearing. For example critiques of the Alternative Economic Strategies published regularly by the FOL and CTU slammed the reformist illusions in regulating and pacifying capitalism. The basic cause of inequality was argued to be the capitalist system itself and its developmental processes. Aotearoa was no less driven by capitalist laws of motion as any other country. The idea that NZ was more equal than others was a myth based on a few aberrant upturns, in particular the Postwar Boom.

Equally, the possibility of making capitalism equal was also a myth. So the solution to capitalist inequality was the overthrow of capitalism itself. The Keynesian centre fell into disfavour and the battle was now between the far left Marx and far right Hayek. Fast forward 40 years and Hayek has been pushed aside by the right who have appropriated Keynes to bail out the banks. But in the process the market has exposed its hand: it was always handy to have a state to manipulate the market. Now Marx’s books are a booming commodity.

But capitalism will not fall down by itself. As we see countries will be bailed out so long as they have governments that will mortgage future generations of workers to pay back the debt plus compounding interest. And so long as workers let them get away with murder.

The real problem is that capitalism is no longer a progressive force for change but a destructive force. It was progressive so long as it destroyed feudalism and other pre-capitalist modes of production and gave us the industrial revolution. But since start of the 20th century, capitalism has become a top heavy, destructive juggernaut that grinds the masses under it wheels. It survives only by wars and counter-revolutions that smash the masses rebelling against its rule. Its productive capacity is on a long decline punctuated by depressions and wars that only kick start upturns by the sheer destruction of physical and social capital.

The current so-called ‘great recession’ is a deep cyclic recession among a series of such cycles since the end of the post-war boom, itself no more than a long-upturn brought about by the destruction of physical and social capital by the Great Depression and WW2. If there is another cyclic upturn following this recession it will be weak and rapidly swing downwards again. The reason for this is not overpopulation, underconsumption, or the bubble banking system, which are no more than surface symptoms of capitalism in terminal decline.

The underlying cause of capitalist crisis is that it can no longer as a global system extract sufficient surplus from human labour power to produce profits on the total capital accumulated. Since profit is the driving force of capitalist production the motivation to invest stops. Keynes’ ‘solution’ to prime the pump by paying workers to consume to leads to stagflation that only delays the decision as to when bosses stop investing. That is why the only real productive growth is now in East Asia and the other BRICS [Brazil, Russia, India, China, South Africa] where the conditions of early capitalism, low wages, and technical innovation allows labour to be exploited profitably for the moment. And yet even this productive burst will lead to stagflation which will produce a real test of state capitalist systems to survive.

In the rest of the world where capitalism has been long established, despite falling wages and new technology, productivity is lagging. Hence, surplus capital that is not shipped off to China etc. must be diverted into speculation in existing commodities. This is a giant Ponzi scheme to try to delay the inevitable devaluation of money that is not invested productively. No new value is added to these commodities, and their rising prices represent ‘fictitious’ value or capital. Hence when these fictional bubbles burst, the accumulated surplus money is devalued massively. It is a consequence not cause of the current crisis.

The only thing keeping capitalism alive at the moment is the capacity of the ruling capitalist classes to use THEIR state to siphon the wages and taxes of workers to pay for the bad debts run up by speculation. Bailing out private capital debt, turning it into sovereign debt, shifts the burden of repaying the debt onto the working class its total effects now referred to as ‘austerity’. But this trick of making the working class pay for the huge costs of capital’s survival is reaching its limit.

The contradiction of workers both producing the wealth, and then propping up a system that destroys it, has dawned when ‘austerity’ drives the masses of workers into poverty and misery. The ability of capitalism to mask this ‘destruction’ of society and nature as ‘natural’ and ‘necessary’ no longer works. Capitalism is losing its clothes. The unions and social democratic parties that have long kept the lid on workers struggles are as bankrupt as capitalism. Spanish and Greek workers have lost their faith in this political class. The corrupt power of the system of bosses, bankers, media barons and the armies of bureaucrats who keep the lid on popular discontent is being blown apart.

But as the melodrama of media magnate Murdoch in the dock shows, the bosses still have a lot of power to spray bullshit over the most damaging revelations. They pretend not to be naked and a lot of people refuse to open their eyes. Capitalism will stagger from one crisis to the next so long as we let it. Capitalism won’t die until we bury it alive and drive a stake through its heart.

We will see bigger rebellions, general strikes, and working class struggles against fascist movements to keep capitalism alive in the next years. For workers to win they have to pull off the scales that capitalism places over their eyes and open their eyes to the nature of the enemy so as to be able to defeat it. This includes rejecting the superficial analysis that ‘The Spirit Level’ represents. This applies even more to the superficial analysis of its rightwing opponents.

That is why the Marxist critique of Capital is as essential today is it was when it was first written some 150 years ago. We have to replace The Spirit Level with a Chain Saw.