Breivik is a fascist 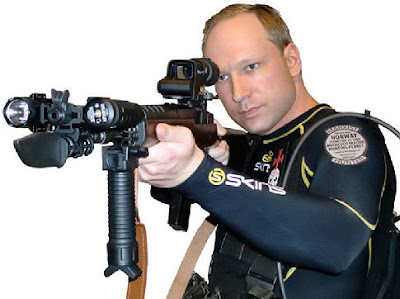 Breiviks massacre shocked the con-liberals into denying that he was the new face of 21st century fascism. As the Mayor of London Boris Johnson said, “He’s an evil nutcase...it’s not about ideology”. Meaning of course he was mad and evil and we could not blame liberal ‘multiculturalism’, migrants, or the now respectable ‘ideology’ of Islamophobia in the West of the sort that paints Obama as Osama, with his head in a target. Breivik was just an inadequate young man, says Boris.
Personalising fascist terror as a game for losers is typical of the conservatives and Blairite warmongering liberals who have spent the last 20 years since the first gulf war making hatred of Islam a new crusade. But Boris misses the point as fascism exploits such personal problems and psychology to turn ‘losers’ into ‘winners’. 'Losers' in the capitalist rat race are recruited as the fascist shock troops that are being mobilised to turn Islamophobia from race hatred into race violence. They do the dirty work for the bourgeoisie whose system is in crisis.
Their task is to attack and smash the working class which defends universal values of race equality, gender equality and the rights of all minorities from demonization and scapegoating which of course requires the overthrow of capitalism. That’s why the bourgeois establishment does not want to give a name to the re-emergence of 20th century fascism in the form of Breivik’s individual terror and tries to write it off as his personal problem. You can change the name but you can’t change the game. Fascism is fascism is fascism!

Are Fascists born or made?

It’s not about ‘evil’ as some inborn lurking troll waiting for the right moment to jump out. ‘Evil’ is something society does to people. And in particular capitalist society which reduces people to ciphers in the market devoid of humanity. This involves the alienation of the individual from her/his labour, from the results of that labour, from him/herself, and from others. What passes today for humanity is what survives that dehumanisation process. We see it in the Middle East when people fuse as a single force to fight dictatorship.

The particular ‘evil’ that kills people to defend ‘racial purity’ has been searched into most deeply by those who asked “why fascism?” in the 1920s and 1930s. One in particular was Wilhelm Reich a Marxist psychoanalyst who wrote books like Listen Little Man. What seems like some inborn evil force is in reality an authoritarian personality that is the product of capitalism where people are raised as passive victims of an exploitative and oppressive system, and when being offered a plausible reason for their pain, the alien, the Jew, the criminal, the communist, then submit themselves to authority and follow the strong leader. Hence the Authoritarian Personality (more commonly known as ‘passive/aggressive’) is normal under capitalism.
Such a personality type explains better the willingness of masses of people to submit to inhuman actions in the name of some greater good such as racial purity, family values, the national ‘spirit’ etc all the so-called values that underpin 20th century fascism, and for some of them to become the ‘shock troops’ of violent reaction.

Fascism is a social movement that comes into existence when capitalist crises raise the prospect of socialist revolution, and the ruling class must mobilise social support in disaffected elements to smash that threat. That is why while particular scapegoat groups are chosen, Jews, Muslims, homosexuals, Roma, and so on, the real target is always the working class. Today most people write off the working class as a revolutionary threat, but the ruling class knows better. What scares them shitless is the fear of ‘communism’ as the post-capitalist moment of modernity when all the old divisions, especially that which underlies all that is ‘evil’ in capitalism – private property - are replaced by the ‘commune’.

That’s why Breivik and all those who appeal to such exclusive and particularistic values against the rise of modernity hate cosmopolitanism and ‘multiculturalism’. They are neo-fascists targeting the biggest threat of all, the revolutionary working class. They know that behind the ‘socialist’, ‘cultural Marxist’ - even social democratic – political currents, there are the masses straining at the leash against the system that dehumanises them, ready and willing to overthrow it and replace it with a new society based on real freedom and equality.

To make that happen it is necessary to be clear about how to fight fascism. Fascism is the last resort of the bourgeoisie to divide and smash the working class as a threat to its hegemonic rule. Workers must have no illusions that the capitalist state can stop fascism. The interwar period proved that the state supports fascism. Trotsky's writings on fascism are necessary reading. The working class has to organise independently of the state to smash fascism by mobilising on the streets to stop the fascists rallying and holding meetings.

Even more clearly, the fascists use any method to destroy the working class movement. They are always calling on their shock troops to use violence including arms. Fascist gangs are recruited to kill the leaders of the labour movement as we can see from Colombia to Syria. Even relatively isolated individuals like Breivik are part of an international fascist movement which sees the need to kill the class enemy. Therefore, to defend themselves from fascism, workers must form armed self-defence squads. Any qualms they may have about training in the use of arms, and carrying arms, is to surrender to fascist violence. As Trotsky said in the 1930’s, the only way to stop the fascists is for armed squads of workers to “acquaint their faces with the pavement”.
So when it comes to defeating fascism, revolutionaries are not exponents of pacifist ‘cultural marxism’ which is a bastardised form of pseudo-Marxism that appeals to bourgeois parliament to reform capitalism. Revolutionaries build an armed, independent working class movement dedicated to overthrowing the bourgeois state and defeating its fascist gangs, paramilitaries and mercenary killers, who are paid to terrorise and assassinate innocents as well as the leaders of the revolution. We have no illusions that the weapon of ideas can be defended without the idea of weapons.