A Marxist review of Capitalism and Drug Use 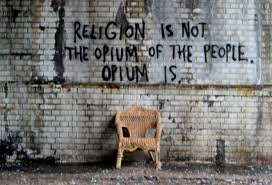 In New Zealand recent news coverage has been a typical example of journalistic activism promoting a moral panic about an issue.. in this case psychoactive drugs. Headlines about psychoactive substances, (synthetic cannabinoids) raise the issue of the legal status of new drugs, and call into question the legal status of old drugs. Dramatic case studies have made headlines, while the huge numbers of people lining up outside one of the limited (to 250) stores was repeated, as if this showed a problem. Various local newspapers gave plenty of space for anti-synthetic drug campaigners, amounting to free support for the anti-drug campaign. These were frequently parents distressed by their son/daughters loss of potential as a consequence of getting into synthetic cannabinoids (“legal highs”). Moral anti-drug fundamentalism, often comes from people whose addiction is something else (religion, work, alcohol, sport, etc). NZ law makers had given up on the war on drugs approach. Legal highs were a step ahead of the banning laws. New psychoactive substances were always in the pipeline, chemically different – not banned as yet. So the lawmakers tried regulations.

For workers’ control over all drugs!
For workers’ control of health & safety in the workplace!
Reduce the hours of the “fulltime” working week until there is employment for all!
For workers committees to set living wages in a “fulltime” (40hrs) week!
We make these calls in the knowledge that true workers control will only be possible with the overthrow of capitalism. This shows that the solution to capitalisms problems cannot be found within capitalism.
Posted by Dave Brown at 12:33 AM