Aotearoa: Mana, a Movement for Reform or Revolution? 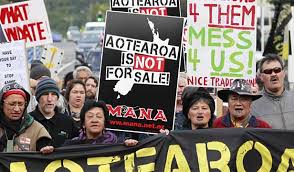 The NACT regime is fearful of both Mana and the new Dotcom party so they are spinning a campaign to smear both as they talk about an alliance to get over the 5% electoral threshold.  Well the NACTs would know all about the 5% threshold. But is Mana selling out to a rich 'internet pirate' in danger of being extradited to the US, or is there some logic to Mana doing a deal with Dotcom?
Background
Mana is not very left wing. It is basically a Maori nationalist party with some populist elements linked to the Australian Green Left and the Bolivarians in Latin America. Mana came out of the Maori Party, itself a split from the Labour Party in opposition to the former Labour government “Foreshore and Seabed Act" effectively confiscating Maori claims to rights to the Foreshore and Seabed such as aquaculture and mining. But the Maori Party was always committed to the emerging capitalist tribal, or iwi, leaders whose interests were not those of the mass of Maori workers. They proved this by joining in a coalition with the National Government alongside ACT and NZ Future.
Harawira split from the Maori Party to form the Mana movement when it proved incapable of standing up to its National Party partner to defend ordinary Maori. It appeared that Hone Harawira had been trying to meet the needs of poor and working class Maori as a Maori Party MP, and was obstructed by the Maori party leadership because of their alliance with the capitalists. The lesson should have been that an alliance with capitalists will not meet the needs of working or poor. Has Mana taken that lesson on board?
Mana took those dissatisfied Maori party members those who agreed that the Maori Party were betraying the needs of working and poor Maori in government with National. Mana enlisted Unite union official Matt McCarten as campaign manager and gained some union activist support. Mana movement also attracted some working class activists and left wing activists including some from Socialist Aotearoa (SA) and International Socialists Organisation (ISO).
Mana’s policy reflects the diverse membership – influenced by Maori nationalism and a popular practical ‘social welfare’ for the poor. “Feed the kids” has been one of Hone Harawira’s more potent policies raised in parliament. However just as the Maori Party was formed to defend the right of iwi to set up capitalist corporations to exploit the Foreshore and Seabed, Mana’s policies for the poor are a compromise with capitalism. They seek to patch up a problem within capitalism, rather than overthrow the entire system. As such it is a movement for reform and not a movement for revolution.  Let’s see how this works in practice.
Mana movement for reforms not revolution
Housing - Mana participated in the fight against privatisation of state housing areas in Glen Innes, Porirua and Hastings. It is committed to state housing and has picketed and blocked trucks removing state houses from Glen Innes. This is a good tactic but it is being used to push a parliamentary strategy rather than building a working class movement on the ground. Mana failed to build support in the community and in the unions against the removals to not only picket but occupy these homes with working class families that need the homes. Instead they used small groups of locals and supporters in futile attempts to stop the removals.  As a result Mana’s weakness and desperation lead to individuals staging risky stunts and members being arrested – including leaders such as John Minto and Hone Harawira. This has reduced housing activism to no more than political diversions such as road trips to Wellington (parliament) and letters to politicians.  As a result the NACT regime has successfully divided Maori into competing over a declining stock of houses with Kaitaia Maori receiving relocated Glen Innes houses and Whakatane Maori offering to buy up State houses for removal.
Workers struggles - Mana has had victories in some picket line protests – shaming an Otara retailer into removing gambling machines, and embarrassing the Auckland city council into exploring other options for an East – West motorway from the airport (instead of through Mangere suburban housing area).  These are notable because they are based on the effective rallying of working class communities which then have the potential to get politically involved in a questioning and challenging Mana’s reformist strategy. Generally however, Mana has only supported union pickets as followers not as leaders. Except for those in Mana who are involved in the Unite! union they have not given priority to campaigns for workers in struggle against the capitalist class.  Similarly, the Auckland Action Against Poverty (AAAP), founded by Mana co-Vice President Sue Bradford, a pressure group that is active in campaigning for the poor, does not promote itself as recruiting the poor to the unions, nor the Mana Party itself. The Mana movement is therefore fragmented and aimed at local body and parliamentary politics rather than aimed at building a united working class mass base capable of developing into a revolutionary movement.
Against Asset sales – Instead of workers occupations of state assets against sales, Mana has played into the hands of private capitalism by supporting the Maori Council legal fight (injunction) against the sales (for Maori rights as capitalist rights). Power station workers combined with working class communities could occupy these sites together. However we would need to cut the power to the capitalist class to stop the sales. And that would have raised the question of who has the power? – a revolutionary working class; or a parasitic capitalist class. What is needed is more direct action that mobilises the local working class communities in the issues that matter.  The weakness of organised working class movement outside parliament cannot be overcome by being again and again diverted into parliamentary dead-ends.