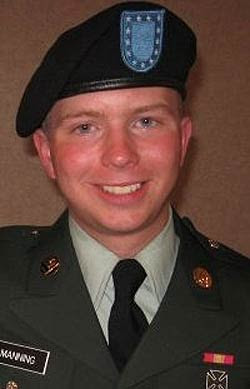 The release of the Afghanistan 'war logs' that blew the secrecy surrounding the inhuman war in Afghanistan have been traced by the Pentagon to Bradley Manning - bradass87 - (photo above) an intelligence officer based in Iraq. The logs that expose the ongoing conduct of a brutal, murderous war against the people of Afghanistan are likely to fuel a new wave of anti-war opinion against the war.

While Wikileaks role in facilitating the publication of the logs is to be welcomed, the real hero of this scandal is bradass87 who was arrested in May and has spend two months in jail in Kuwait. We say the workers of the world must demand the immediate release of Brad Manning as a war hero!

Manning was dobbed in to the army by a former hacker Adrian Lamo. According to the Guardian:


It was not until late May that the Pentagon finally closed in on a suspect, and that was only after a very strange sequence of events. On 21 May, a Californian computer hacker called Adrian Lamo was contacted by somebody with the online name Bradass87 who started to swap instant messages with him. He was immediately extraordinarily open: "hi... how are you?… im an army intelligence analyst, deployed to eastern bagdad … if you had unprecedented access to classified networks, 14 hours a day, 7 days a week for 8+ months, what would you do?"
For five days, Bradass87 opened his heart to Lamo. He described how his job gave him access to two secret networks: the Secret Internet Protocol Router Network, SIPRNET, which carries US diplomatic and military intelligence classified "secret"; and the Joint Worldwide Intelligence Communications System which uses a different security system to carry similar material classified up to "top secret". He said this had allowed him to see "incredible things, awful things … that belong in the public domain and not on some server stored in a dark room in Washington DC … almost criminal political backdealings … the non-PR version of world events and crises."
Bradass87 suggested that "someone I know intimately" had been downloading and compressing and encrypting all this data and uploading it to someone he identified as Julian Assange. At times, he claimed he himself had leaked the material, suggesting that he had taken in blank CDs, labelled as Lady Gaga's music, slotted them into his high-security laptop and lip-synched to nonexistent music to cover his downloading: "i want people to see the truth," he said.
He dwelled on the abundance of the disclosure: "its open diplomacy … its Climategate with a global scope and breathtaking depth … its beautiful and horrifying … It's public data, it belongs in the public domain." At one point, Bradass87 caught himself and said: "i can't believe what im confessing to you." It was too late. Unknown to him, two days into their exchange, on 23 May, Lamo had contacted the US military. On 25 May he met officers from the Pentagon's criminal investigations department in a Starbucks and gave them a printout of Bradass87's online chat.
On 26 May, at US Forward Operating Base Hammer, 25 miles outside Baghdad, a 22-year-old intelligence analyst named Bradley Manning was arrested, shipped across the border to Kuwait and locked up in a military prison

Lamo's reason for informing on Manning to the military was that the log could identify and expose military in the field. Perhaps this was as the result of the first Wikileak from Manning, the video of the massacre of civilians:

... on 5 April, Assange held a press conference in Washington to reveal US military video of a group of civilians in Baghdad, including two Reuters staff, being shot down in the street in 2007 by Apache helicopters: their crew could be heard crowing about their "good shooting" before destroying a van which had come to rescue a wounded man and which turned out to be carrying two children on its front seat.

This obscenity led to a scramble to find the perpetrators, not of the assassination but of the leaks. Lamo tries to throw dirt on Manning's motives:


Lamo, 29, who lives in Sacramento, said that the Afghan war documents are "basically a large dump of battlefield intelligence systems that Manning had access to."
He said, however, that Manning lacked the technical expertise to obtain and transmit all the data and received help from people who worked with WikiLeaks. "There was overlap between people who were his friends and people working with WikiLeaks," Lamo said.
"They made him feel real cool by putting him in touch with Assange," he said. "They were WikiLeaks' 'shopper' for classified information. There are at least two people in his social circle who are in contact with WikiLeaks."
Lamo said he does not know how Manning's friends came to know or work with WikiLeaks. "At some point he was either induced, or of his own volition, decided to contact [WikiLeaks]," Lamo said.

So Manning is risking the lives of his fellow soldiers because he wants to feel 'cool' by associating with WikiLeaks? But it doesnt really matter if Manning felt 'cool' or not, he jeopardised his career, his freedom (he could face 50 years in jail) and possibly his life by acting on his beliefs that the war was "criminal". If Manning's posts on his dig.com address and his support for wikileaks role in 'climategate' are any indication, Manning may have right-wing libertarian politics.

A blogger says that Manning was screaming "look at me, I'm a hero waiting to happen".

I can't say if this has harmed the security of our troops. But I don't think it's advanced the cause of peace. This information gives us a measure of insight into what it's like on the ground of a massive war - but how much did we need that, and what cost was it worth paying to obtain? As far as I can see, two things have been satisfied by this leak: bradass87's desire for notoriety, and our need for voyeurism.

So bradass87's actions that can lead to a courtmartial and years in jail are motivated by nothing more than a 'desire for notoriety' to feed our need for 'voyeurism'.


Whatever Manning's motives and whatever our reaction, the truth about the war can only bring about stronger actions to end this imperialist war and the capitalist system that makes it necessary.


Manning's case is proceeding within the military justice system, with the Army Criminal Investigation Command leading the probe. The next step is a preliminary hearing to determine whether there is sufficient evidence to recommend a court-martial, Lapan said. If individuals not connected to the military are found to be involved in the leak, "then that's when Justice and the others would potentially get involved," he said.

Here we see the military rushing to suppress the truth and punish the whistleblowers and of the 'messengers' such as Wikileaks.

The world's workers must defend whistleblowers against imperialist war!

As for the argument that the truth be suppressed for the sake of the lives of the military personnel, we say bring on the truth, more truth and nothing but the truth.  A recent case of the photo of NZ SAS soldier on duty in Afghanistan, Willie Apiata, (photo below) when published in the corporate media, met with condemnation by the RSA (Returned Services) who said it put him at risk. We say more photos please. On August 4th NZ time the first NZ casualty of the war in Afghanistan occurred. The dead soldier was Lieutenant Tim O'Donnell (photo below) aged 28, a member of the NZ Provincial Reconstruction Team in Bamyan Province. A decorated career soldier who also served in East Timor, O'Donnell was killed when his convoy hit a roadside bomb. The irony is that the war in Afghanistan is lost, the COIN of McCrystal and Petreus (counterinsergency operation) has failed, and Obama is looking to do a deal to get out leaving a massive US base at Bagram. Not only that, the people of Bamyan do not want the Reconstruction Team as there is no nation building possible in a middle of a war. Yet the death of this soldier becomes a cause for national mourning in New Zealand. As communists we do not mourn his death, nor do we welcome it. As a professional soldier and an officer O'Donnell was prepared to risk his life to wage an oppressive war. His death is part of the defeat of imperialism in Afghanistan. 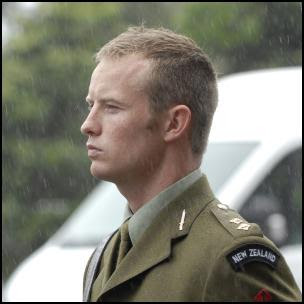