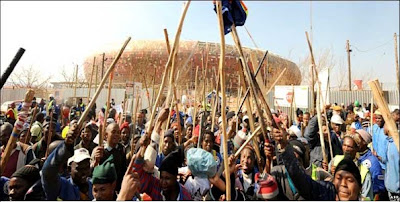 The Medium Term Budget speech by new Finance Minister, Gordhan, confirms that the ANC government is the agent of imperialism in South Africa.

At a time when the monopolies are repatriating over R200 bn per annum in profits from plundering the working class in South Africa, this shameless regime puts the burden of capitalist's crisis on the backs of the working class. The imperialists are making unheard of super-profits, among them Pick 'n Pay whose annual profit from starving the masses comes in at close to R1 bn.

As a reflection of what is happening to the entire working class, the community of the Matafeni township had 2 schools bulldozed to make way for the 2010 Mbombela soccer stadium. The students sit literally in the dark in temporary structures, freezing when it is cold and too flustered to learn when it is hot. The government has to date not even made arrangements when their schools will be rebuilt. Yet the multitude of consortiums have already made billions in profits from these stadiums at a cost of partnerships with the ANC elite. All these construction companies (Murray and Roberts, WHBO, Basil Read, Group 5, Grinaker) have a major shareholding held by US banks. The billionaire housing Minister even has shares in Group 5.

When the residents of Matafeni rose up to protest against this injustice, many were arrested and today they live under a state of siege, under constant threat of being locked up.

In short, the basic democratic rights are being trampled on by the ANC government who shifts the burden of capitalist's crisis onto the shoulders of the working class. The ANC are direct agents of monopoly capital profiteering.

To add insult to injury, the government will now borrow R640 Bn to fund, mostly, the building of coal power stations that are not needed. Technology exists for 200 000 MW of hydropower from the DRC, but power from there is planned for export to Europe, while Africa is kept in the dark. Solar power technology as developed locally could be used to set up over 24 square km in the North Cape desert to power the entire SA economy, yet the technology has been privatised to the Rembrandt monopoly and exported to Germany.

Cabinet, including the SACP and ex-Cosatu leaders support the increase of electricity tarriff by 45% per annum over the next 3 years. The beneficiaries of the Eskom scam build programme are the same Group 5, Murray and Roberts, etc. In other words the R640 bn in loans is a massive bailout of the US banks, such as JP Morgan Chase who not only control the Reserve bank but the entire economy. It is the working class and the lower middle class who will pay for the loans and interest on it for generations to come, with early death and starvation. This is what the 'shoot to kill' policy of the ANC is really defending- the absolute subjugation of the masses in South Africa to brutal imperialist exploitation. Ask the masses in Kennedy rd, whose leaders are in jail while some of their community have been killed by ANC thugs keen to get their hands on housing tenders. This trampling on the few democratic rights won by the masses here is but a reflection of the same policy of imperialism world wide.

In June this year, Obama launched a military coup against the people of Honduras. The masses are still resisting but the coupists are being given cover by the US military base in Honduras. US imperialism now plans 7 new military bases in Colombia; they have budgeted for US$1 trillion for the wars in Afghanistan, Iraq and Pakistan, and will set up Africom head quarters in Ghana.

Rather upsurprising both the SACP and Cosatu leaders welcomed this budget, this attack on the working class. The so-called national democratic revolution is nothing but a get rich scam for the black middle class to become overnight billionaires on the backs of the working class. This is the essence of the ANC-SACP-Cosatu alliance.

The time has come for the working class to break free from the alliance, build independent structures of the working class, uniting employed, unemployed and soldiers, in action committees from local to national level. To eat we need to nationalise the land, to nationalise the land means expropriating all the banks, centralising them under workers' control; to have work we need to expropriate all imperialist assets and place them under working class control. needless to say no capitalist should be compensated. Share the work among all those who can work without loss of pay. To centralise the struggles we need to organise a general strike.