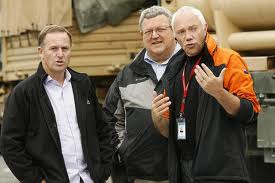 Christchurch continues to be the test bed of Disaster Capitalism in NZ proving the point that crises allow capital to profit at the expense of workers. Or course crises can be manufactured too as the sacking of ECAN shows. Dispensing with the inconvenience and risks of the democratic process is justified by declaring a state of emergency, especially a ‘national emergency’. This has enabled the NACT regime to pass under urgency the Enabling Act to dispense with any democratic constraints in rebuilding Christchurch. Massey’s Cossacks are riding again, but atop growing herds of dairy cows this time. There are fewer of them because these are corporate farmers more often these days, some of them in the NACT cabinet or very close to it.

The Enabling Act is a warning to the rest of NZ of what the NACT regime will impose if re-elected. The NACT cabinet is made up of bosses who own large chunks of NZ assets. They are running the country like NZ Inc with the cabinet at the board of directors. Christchurch residents are incensed at the role of Fletcher Building who will profit hugely after being appointed by Cabinet to lead the rebuild. This is nothing new. Fletchers was founded around 1940 on the back of a massive state contract to build army huts and state houses. James Fletcher was seconded to become the Minister of Construction. Today the close relations between the NACT cabinet and big business like Fletchers vindicates Karl Marx view that: "The executive of the modern state is but a committee for managing the common affairs of the whole bourgeoisie".

As we pointed out in ‘Disaster Capitalism Downunder’ the NZ ruling class is seizing on the Christchurch earthquake to create business opportunities while at the same time making workers pay for their economic crisis. Over 80,000 adults and their families (from fall in eftpos cards used) have been shunted around NZ to add to the floating reserve army of labour of over 270,000 unemployed, putting downward pressure on wages, and reinforcing NZ’s comparative advantage as a low-wage country which says Bill English is one way to catch up to Australia. On top of that workers all over NZ have put their hands in their pockets to support fundraising, attending concerts, supporting families’ relocation out of Christchurch etc., contributing $73 million to the Earthquake Appeal by May 17.

Compared with the contribution of workers, Govt is paying the bare minimum. Govt is raising $8.5 billion in bonds for Christchurch but more than half of that goes to repaying loans from EQC, backing AMI and other costs so it’s actual contribution to is around $4 Billion, yet it makes out that the cost of rebuilding has added greatly to the deficit justifying massive cuts in Kiwisaver, Working For Families, flog off 49% of state assets, and cuts in social spending.

This is their sob story to shift more of the cost of the crisis onto workers, in particular Christchurch workers. So the emergency payments going to unemployed have been stopped for most workers. The CTU says that support has been cut from 47,000 to around 4,000 workers. The Govt claims that the situation is back to normal. But it’s clear from the fact that Westpac staff in Christchurch say they are “being forced to push loans and insurance policies on financially struggling customers in the wake of the devastating February earthquake” that the situation is far from normal . The CTU and its Labour Party backers wants a Worker Assistance Package for Canterbury, including ongoing income support, job creation schemes, and skills training. So far, as we would expect, there has been only a small commitment to skills training to fill the shortfall of labour for rebuilding.

The CERA’s emergency powers allow the property rights of individuals and small businesses to be ridden over. Angry small business owners locked out of their businesses while they were being looted by cowboy demolition firms protested.

Brownlee the CERA boss basically tells them to go to hell. Brownlie openly mocks even some larger business owners, as ‘obstructing redevelopment’ in the TV coverage.

Others were not allowed to retrieve their personal property. The case of David Theobold shows what happens to people trying to enter property to retrieve personal property. He entered his house as it was being demolished to retrieve a valuable computer hard-drive only after repeatedly failing to get permission. He was locked up for 2 weeks, given a mental health assessment and treated like shit.

He is not the first, nor will he be the last. So while these basic democratic rights and financial support of workers are abused and withdrawn, the NACT regime glosses over its disaster capitalism routine with photo-op events such as the visits of royalty and celebrities like Prince Willie and Rachel Hunter.

What lessons can we learn from the way Disaster Capitalism is being applied in Christchurch? With so many lives in limbo and workers dis-empowered, the least we can do is learn from their experience - instructional for everyone’s future as that is. While disguising the heightened rate of profit-gouging that business-as-usual could otherwise not deliver, Disaster Capitalism works most visibly at the maintenance of myth. While caring and charity wear thin with fading headlines, gratitude is manipulated into political compliance to amorphous and obscure plans. Some prominent myths maintained by Disaster Capitalism are:

1. ‘Science understands what is happening and is here to help you’: in fact underfunding and service cuts have long-since eroded the effectiveness of commercially-driven science research. Science didn’t intervene to stop the collapse of buildings weakened by the September earthquake and save the 182 lives lost in the February quake. Its primary role here has become after-the-event pacification of the populace because panic and necessary evacuations would dent business profits - especially tourism and hospitality. Public good science is being misused for the purpose of business continuity.

2. ‘The public is involved in the reconstruction’: all kinds of elaborate ruses are in use for convincing workers that this is the case - information talks, news and advertising media, websites and workshop ‘engagement’ etc.(‘consultation’ has been scrapped as ‘too one-way’) - when the actual outcome is the removal of causes and mechanism for complaints. CERA has carte blanche. After all, elected regional representation was disabled by the NACT regime for the very same reason. City council and community board representatives have been neutralised too. Appointment of ‘community leaders’ onto ‘representative panels’ is sham democracy. Workers are being tricked into ‘ownership’ of harmful governance decisions. Exhaustion and bad roads have drastically cut back civic life, which is still prevented from accessing the city centre.

3. ‘A level playing field exists for business to get back on its feet’: small businesses like retailers are struggling to reopen in the wake of martial law, and their trade will go to big retail chains and malls - benefiting big finance capital only and the monopoly capitalist state. Disaster Capitalism can best be understood as accelerated monopoly capitalism.

4. ‘Urgency means we are better off without sound planning’: the Resource Management Act and every form of regulatory safeguard have been sidelined by CERA authority over local government, yet it was the building code - or what’s left of it - that can claim first honour in saving lives. Parks and reserves are being ‘temporarily’ utilised for profit-making housing etc services, and the city is being reshaped unilaterally by CERA. Port Lyttelton, for example, has been given free rein to rapidly expand export facilities by harbour in-fill.

5. ‘You will be rehoused, paid for by insurance’: everyone affected by the earthquakes faces large extra costs and no chance of full reimbursement. Workers’ housing equity is disappearing into the state banking system - again, monopoly capitalism at work.

6. ‘Your jobs, income and benefits are secure’: yeah, right. There are frequent aftershocks, the most recent a 5.5 and there will be more with no safety and security in sight for Christchurch workers.

The list of methods and myths by which Disaster Capitalism raises the economic rate of exploitation for monopoly capitalism - across all of working society and the environment - is still larger than this. The reaction of Christchurch workers has been to wake up and smell the bullshit and promote their own efforts at rebuilding the city. Working people need to organise quickly to protect and extend their own interests through political struggle. We support the workers of Christchurch and the efforts of the unions to organise them in this struggle as should all kiwi workers.
Posted by Dave Brown at 4:29 PM