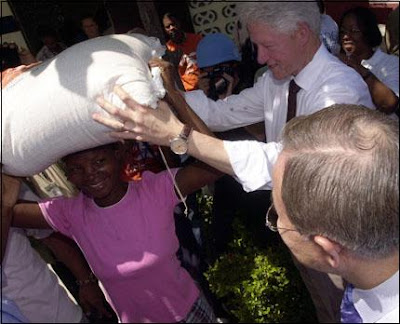 Haiti's long history of imperialist oppression
The sickening hypocrisy of the US and European powers in their response to the latest calamity in Haiti has a  long history that goes back to the French revolution.
Haiti became the first Black Republic in 1804 and is has paid the price ever since for having the temerity to fight a war of independence against France to free itself from slavery. Napoleon granted the slaves their freedom only to retract his edict when lobbied by the French slaveowning bourgeoisie.
Until recently Haiti was still paying reparations to France for the value of the slaves freed by its liberation war!  The price of that liberation was not only the sucking of Haiti's lifeblood for centuries it was an ongoing economic blocade by the European powers and the US which forced most of the liberated slaves to live a life of subsistence as small croppers on the former slave plantations, subject to poverty and immiseration.
Even the great leader of the Bolivarian revolution, Simon Bolivar who having accepted the of hospitality and aid of Haitian Black Republic as he prepared for a new campaign in 1815, refused to include Haiti in his plans for a United States of Latin America. Bolivar, himself as mixed blood bourgeois was reluctant to abolish slavery and did not envisage his revolution going all the way to black republics.
Bolivar as a bourgeois nationalist shared the fear of European slaveowning classes that Haiti would spark slave rebellions throughout the Caribbean and wider afield and that the slaves would not stop at their freedom but demand freedom from capitalist exploitation as well. It is that fear that turned Haiti into a quarantined 'failed state' fated to live as an isolated backwater under frequent US occupation. It still dominates the thinking of US imperialism today in the fear that the Cuban revolution is still contageous and might spread to Haiti if not permanently occupied by a motley band of Sepoy troops serving the interest of the US.
Since the early 20th century Haiti has been constantly invaded by US troops backing reactionary regimes such as the notorious Papa Doc Duvalier and his son Jean-Claude who ruled with armed gangs of Tonton Macoutes. When the son's brutality became an embarrassment to even the US well used to  backing Latin American dicators, he was forced out of office in 1986. The populist priest  Aristide was elected President in 1991 but ousted by a US backed military coup that same year. Another US military occupation followed and Aristide returned in 1994 to complete his term of office. Aristide was relected in 2000 but fell out with the US and its neoliberal policies and was forced out of the country in 2004 by a US/French coup. Since 2004 Haiti has been occupied by a multinational military force.
What Haiti's history shows is that there is nothing 'natural' about the huge loss of life in the recent earthquake. Millions have died in Haiti as a result of the deliberate colonial policies of the European powers and the US. The loss of lives in the war of independence was minimal compared with that lost to successive blockades, famines, hurricanes all accompanied by the usual bourgeois hypocritical blaming of the usual suspects: economic backwardness, slave mentality, crime ridden slums, black rebellion, drug-running gangs etc.
And just as this latest catastrophe has nothing to do with nature and everything to do with colonialism and capitalism, the the historic slaveowners are turning up once more as the purported saviours.  Of all saviors the US navy arrives with the fleet that has historically supressed rebellions and popular national revolutions in Latin America under the US Monroe Doctrine that states that the US can rule wherever its business interests are found. And as usual, the US navy turns up to prepare the ground for the carpet bagging businessmen always looking for an opportunity to profit from the poverty of the decendents of slaves. And there is no way that the populist Aristide could do anything to change the fate of Haiti, he has already exhausted the US patience. While the US claims it is not staging another military take-over, this is exactly what is happening, and after a polite pause we will see another US regime put in place.


Why is the US interested in a tiny devastated state?
Haiti is a few miles from Cuba and since the fall of the Duvaliers, the US has been determined to stop it becoming another Cuba or Nicaragua threatening US hegemony in its own 'backyard'. When Aristide was elected in 1991 the US stepped in with a military coup as it had done many times in Latin America and the Caribbean. When Aristide was re-elected in 2000 it was only because he promised the US not to attack its imperialist oppression and super-exploitation of the Island.
But after 9-11 Aristide aligned himself with opposition to Bush's global 'war on terror' and increasingly with Chavez and Castro. Aristide survived another 3 years only because the US was pre-occupied in Afghanistan and Iraq. By the time he was overthrown and exiled by the combined US-French coup of 2004, Aristide was part of the growing Bolivarian populist tide rising in Latin America and the Caribbean.
With the onset of the 'great recession' in 2007 and the election of Obama in 2008, the US attitude towards the Bolivarians hardened. What was formerly a growing alliance of populist regimes had developed into a bloc now aligned to the US 'axis of evil' in the 'war on terror', in particular, Iran and the DPRK. Even this was more an ideological standoff than a political and ultimately economic threat. Venezuela was dependent on the US oil market and Cuba was rapidly moving to restore capitalism on Island. However, in the years when the US was pre-occupied fighting in the Middle East and Asia, the Bolivarian/Castro bloc was increasingly turning to China as it main political and economic backer.
The urgency with which the US has now invaded Haiti with 20,000 troops and its clear determination to occupy and control Haiti cannot be seen as a mere response to the longstanding threat of Cuba and the Bolivarians. The military intervention in Haiti has to be seen as a response to a much larger threat, the growing power of China globally and in Latin America, where it is China that is becoming the main rival contesting the US sphere of interest in its own backyard.  US policy in Latin America today is shaped by the reality that it is China that has become the backer of the Bolivarian regimes, and that it is China that is most likely to benefit from the restoration of capitalism in Cuba.
Imperialist Crisis and War
The response of the reformist left to the US intervention in Haiti is to call for the US and France to 'forgive the debt' and pour in 'humanitarian aid'. This is to ignore the history of Haiti as an impoverished colony and semi-colony, and to ignore the current escalation of military confrontation between the two major imperialist blocs - the US bloc and the China-Russia bloc. The reformist left thinks that this confrontation is being driven unilaterally by a US imperialist elite, and that this imperialist 'policy' of coups and military occupations can be 'reformed' by  the relatively 'progressive' China-Russia bloc so that global wealth can be redistributed in the form of transfers from rich to poor countries including much increased 'humanitarian aid'.
Today, the only reason that it is possible to promote such reformist illusions is that in the face of a global recession that saw a big slowdown in global production and growth, China was able to continue expanding so that its demand for raw materials and commodities, as well as its investment of surplus capital in many countries in Asia, Africa and Latin America, revived the hopes of reformists everwhere that capitalism still had a future as long as China and not the US was the dominant power.
But this is a delusion. China as an emerging imperialist power backed by its main ally Russia, is not 'progressive'. Its restoration of capitalism and rapid capital accumulation was only possible by the state capitalist super-exploitation of its many millions of workers. Its expansion as a rising global power is on the basis of the super-exploitation of global workers. The investments that China makes in Sudan, Bolivia or Iran are not 'gifts' but hardnosed grabs for raw materials and commodities and labor power. As its interests become a threat to the US bloc China will continue to arm its allies and develop its own military to defend those interests.
Haiti is on the Caribbean back doorstep of US imperialism. The Honduras coup which overthrew Zelaya last year, the rapid expansion of US bases in Colombia and overflights of Venezuela, and the military occupation of Haiti, are all part of a global response of US imperialism to the rising challenge by a rapidly expanding imperialist China. This means that Haiti is caught up in an inevitable drive towards inter-imperialist war in which the workers of the world must not take sides, but must turn their guns on all the imperialist powers and fight to break with every imperialism!
No confidence in Aristide, the Bolivarians or Castroites!

For Caribbean workers from Guadeloupe to Cuba to unite to make a political revolution in Cuba and a revolution against all the imperialist powers in the Caribbean!
No confidence in China as a 'progressive' capitalist power.  China is now an imperialist regime leading the China-Russia bloc competing with the US for global hegemony!

Out with the US and France!
Defeat the US/UN occupation troops!
For armed workers and poor peasants militias!
For the mobilisation of US and French workers to strike against the military occupation of Haiti!
'Forgiving Debt' blames Haiti when Haiti has been super-exploited for centuries!  Workers mobilise to make France and the US pay full reparations for the economic damage inflicted over centuries!
'Humanitarian aid' is only a tiny fraction of the value expropriated from Haiti over centuries! Workers of Cuba, Venezuela, and of the US and Canada, emergency aid to rebuild Haiti! For workers solidarity missions and international defence committees to rebuild Haiti!

For a Workers and Peasants Government in Haiti and Hispaniola!
For a Socialist Federation of the Americas from Alaska to Tierra del Fuego!

Posted by Dave Brown at 3:29 PM No comments: