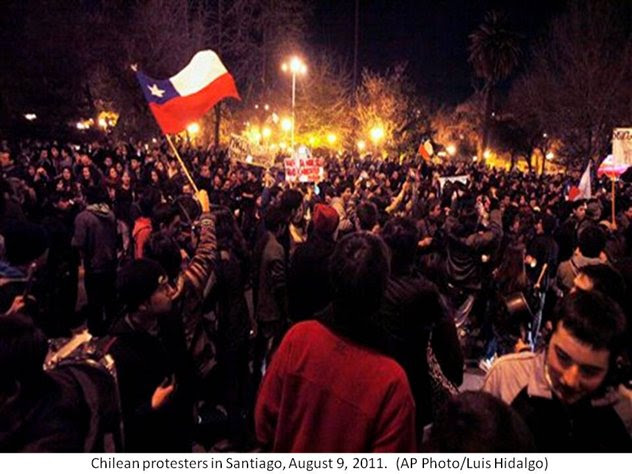 Reprinted here is a letter from comrades of the Permanent Revolution Collective in Chile indicating stepped up political repression against working class militants.

We address this letter to all political organizations of the revolutionary left to denounce strange events that occurred in the house of some members of our organization, the Permanent Revolution Collective. We start by defining, as it were, the facts so that readers can judge for themselves the character of these.

On Friday May 24 this year, at approximately 19:30 pm, the home of some of our members was invaded by an unknown person. In the place was a single comrade, sleeping, after having completed their work as telephone agent the previous night. The other two friends who live in that house were not there at that time, as they were at work. The person entered the room of our comrade and bluntly demanded that he surrender the computer "notebooks" in the house. This, no doubt, is evidence that the thief knew that there was more than one laptop. Calmly, and threatening that he had an armed accomplice outside the home, he forced our comrade to give up the three notebooks they had there. The strange fact is that the person was not interested in taking money visible in the room. He did not check the notebooks. There were no notebook chargers (apart from one old, unsellable) taken, and and he took nothing but the computers, despite other valuables, including money, in sight.

The apartment raided is located in the commune of La Cisterna, in a condominium that never in its history had been robbed in this way. The apartment is located on the second floor, which leads us to believe that the subject climbed to the balcony through the Avenida El Parrón in hours when there were many pedestrians. The distinctive style of dress and speech of the thief, his few words and confident attitude, was a totally different modus operandi from the common lumpen, and the failure to take money and other valuables requires us to suspect that this was not a common theft.

The apartment that was raided is inhabited by three militant revolutionaries, workers and students, who have been active in the process of mass mobilization that has taking place in Chile in recent years. All three computers are stolen from militants of our organization, now fighting in the front ranks next to all sectors who revolt against the government of Piñera and the Pinochet regime administered by the Coalition. The notebooks contained hundreds of files with political documents, private and public, that are part of the life and history of militants. We clarify in advance that the contents of these documents has nothing that breaks existing bourgeois legality.They all deal with theoretical debates and political development, national and international, about the class struggle in today's society.

We denounce these facts because we refuse to think of them as a "petty theft" that takes the computers of three comrades of a revolutionary organization. We have good reason to suspect the bourgeois state and its intelligence services as architects of the assault.

As appropriate, the complaint was made in police, who, of course, did nothing more than drive round a couple of blocks, then stopped any attempt to find the "culprits". This we believe is normal since the police is not only the instrument of coercion of the bourgeois state against the working class and the exploited but only serves to protect the private property of the big bourgeoisie, and in no case the belongings of workers that costs working families like ours much.

This fact is part of an escalation in the regime's repressive crackdown against activists of the working class, the student movement, the poor peasantry and the Mapuche. While we have no concrete evidence, background and characteristics, which meet all the requirements of the modus operandi-police that allows us to openly point to the intervention by the state intelligence services, they have been particularly active in recent months, as was exposed by the kidnapping of comrade César Reyes and Human Rights activist Stephanny Muñoz in recent weeks. Not to mention the Pinochet style raids on squatter houses and the Mapuche communities in struggle.

While we do not want this complaint to be excessively alarming, we considered we must denounce it as a possible new attack, which could be the tip of an iceberg of provocation and aggression against workers and popular fighters.


The comrades whose house was attacked are Gisselle Sanchez, telephonist operator, Alejandro Solis, student expelled for political reasons from USACH and a building worker, and Sergio Vega, metalworker. All comrades are cadres of the Trotskyist Permanent Revolution Collective, and consistent fighters for the working class, internationally and nationally.

We urge the labor, student, and left, to work together quickly to address the current escalation of repression. A meeting that is aimed at developing a control plan to address these attacks is an necessary task for our class and the revolutionary movement. This task demands a principled attitude of all those who fight against capitalism.

Finally, we reiterate that this letter has no other desire than to alert the anti-capitalist political activists that a repressive crackdown is under development. Of course, far from intimidating and undermining the will to fight of our members, this fact only serves to redouble our unwavering commitment to fight alongside the oppressed of the world, at a time when imperialist capital bleeds the world with its savagery, and has declared war on the poor.
Permanent Revolution Collective
Posted by Dave Brown at 10:34 PM No comments:

After the Woolwich attack in Britain: Stop imperialist war-drive and racism!

Socialists must not solidarize with Britain’s professional army but with the anti-imperialist resistance!
Statement of the Revolutionary Communist International Tendency (RCIT), 24.5.2013, www.thecommunists.net

No one is Illegal! Tear down the Wall! For free movement across Borders!

No One is Illegal!  Tear Down the Wall! For Free Movement Across Borders! by JohnnBrown
Posted by Dave Brown at 11:23 PM No comments:

Since 2008 we have witnessed the deepening of the current crisis of capitalism from a global recession to a global depression. Capitalism is approaching its final crisis. All that is required is for the world proletariat to stand up and push it over.

In its desperation, capitalism is cannibalising its working class and its raw materials, provoking an intense crisis of destruction of humanity and nature. Not only is the immiseration of the proletariat provoking uprisings from MENA to sub-Saharan Africa to China and Latin America, the labor aristocracy in the imperialist countries is being driven into the ground.

The result is the heightening of the class contradiction has reached explosive potential, only dissipated in numerous disconnected uprisings suppressed or contained by pro-imperialist regimes from South Africa, Egypt, Libya, Venezuela, because they are not yet united and mobilised into an international revolutionary movement.

In the imperialist countries, the spontaneous uprisings of the indignados, of Occupy, and of left-wing parliamentary tendencies such as Syriza, have proven incapable of meeting the challenge of revolutionary leadership. The crisis has thrown up neo-fascist elements that threaten to smash the new layers of militants before they can be organised into a force capable of mobilising working class struggle on the streets and workplaces.

The so-called revolutionary left of all colors from pink/brown national reformers, Bolivarians, Greens Anarchists and fake Trotskyists, are all feinting left and posing as revolutionary saviours of the working class. They are all traitors in the ranks of the class singing the siren songs of the popular front.  The most dangerous and deceptive are those now organised behind the Bolivarians that unite fake Trotskyists with Castroists and Chavistas in a global popular front with Chinese imperialism.

Comrades, we must dedicate 2013 to our urgent struggles to build a principled new communist international that exposes and destroys all these left wings agents of the popular front from Southern Africa to North America to China and unblocks the road to revolution. The objective conditions for the smashing of capitalism and the building of socialism exist; all that is needed is an organised revolutionary working class to do the smashing. For that we need a new revolutionary Leninist/Trotskyist International!

Forward to the New World Party of Socialist Revolution!
For the working class to survive capitalism must die!