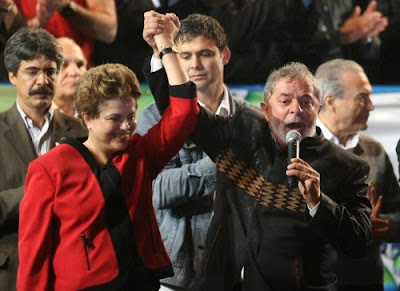 "Tiririca" is wrong!  Whoever wins election, it will get worse!*
The fact that the clown "Tiririca" could be elected with a huge number of votes is an expression of the depoliticization of the Brazilian electoral process. His campaign slogan is: "Vote Tiririca, if things do not get better, they won't be worse". In addition to "Tiririca"  we can find other vote pullers such as football players, athletes of various categories, singers and even, according to the newspaper " Pop News", a porn star.
All polls indicates that the candidate of PT (Partido dos Trabalhadores) Dilma Roussef will win the presidential elections in the first round. Although more corruption scandals came back again to confront the Lula da Silva government (Ministry of Civil House and Receita Federal-tax collection), it is very unlikely that the polling figures will change.
The likely victory of Dilma is based on several factors: a perception by the proletariat that economic  conditions have improved,  caused by payroll loans and big concessions on credit cards; ready access to loans for middle class purchase of vehicles and properties, the availability of money and loans at much lower interest by the Banco do Brasil, Caixa Federal and BNDES, to most sectors of the bourgeoisie.
Thus, Lula is able to  transfer part of his popularity to Dilma. And as José Serra (the main opposition candidate) has not gained in the polls, the majority of capitalists in the southeast region (the richest region), which were initially supporting the candidate of the toucans ( the bird symbol of the opposition Party-PSDB) and the Democrat Party, began to migrate to the base of  support of the PT candidate. The program of José  Serra is no difference in content from the policy and economic measures of eight years of the Lula government. Serra began his campaign emphasizing that he "would do more and better".  Now, he prioritizes the accusations of corruption by the government. However, the stability of polls on voter popularity shows that the media still protects Lula from corruption scandals as it has since the first "mensalão" scandal in his first four years.
Due to the polarization between Dilma and Sierra, the third candidate in the race for presidency, Marina Silva - Green Party (PV) - runs the risk of getting fewer votes than the  10% she has received in the polls. This phenomenon occurred in past elections with Heloisa Helena (PSOL -Partido do Socialismo e Liberdade-a split of the PT) ). With an "label of environmentalist " Marina da Silva represents the interests of the bourgeoisie who had problems with the Lula government in relation to land classfication and disputes over natural resources in the Amazon region. Thus her vice-presidental running mate is  president of "Natura," one   of the largest beauty product companies in Brasil. And her campaign is funded by Alvaro de Souza, a former head of Citibank.
The Marina who runs for presidency has different views from the  former Senator Marina. Before she attacked privatization, the "Plano Real" (the economic plan of former President Cardoso) and Proer (governmental program of Cardoso that saved financial institutions in difficulties), she was also opposed to the payment of the External Debt. Currently she says she is an  admirer of the former president Cardoso, celebrates the stabilization of currency as the great achievement of the "Plano Real",  and affirms that the imperialist policy - this that Lula also  applies - to inject public money into the financial system and large companies, is "a courageous restructuring and reorganization of the banking system." She also applauds the "capacity to honor financial commitments linked to internal and external debts" of the current president Lula da Silva.
In turn, the candidates of parties who say they are the "left opposition" to  Lula  da Silva have campaigns that do not break with capitalism,  because they defend reformist programs. The candidate Plinio de Arruda Sampaio (PSOL) says in an interview with  newspaper "Folha de Sao Paulo"  that: "I do not intend to implement socialism in Brazil, nor is that the policy of my party now. I'll introduce a policy within the limits of capitalism (...)". He is also willing to negotiate the payment of foreign debt after an audit.
The PSTU (Partido Socialista dos Trabalhadores Unificado) is incorporated into the bourgeois democratic regime. The main criticism the  PSTU makes is that the democratic electoral process is restricted by the fact that Ze Maria (its candidate for presidency)  is not allowed  to participate in the debates of candidates on television. The PSTU does not denounce the police and the Army as the major support institutions of the bourgeois state and does not advocate the dictatorship of the proletariat. They present their 16 points as a solution to the violence  that workers suffer, and demand the "dissolution of the current police and the creation of a civilian police, who would elect their leaders and be controlled by the population of the neighborhoods in which they operate."
By failing to call for the seizure of power by the proletariat, PSTU proposals are restricted to the limits of the capitalist system. In this respect, Plinio of PSOL speaks  more honestly.
We from the LOI, therefore reaffirm that in these elections workers still are without  alternative. Our vote is NULL.
*Tiririca is the nickname of a professional clown who runs the election for federal deputy...and media says is expected to get almost a million votes in next October, 2, day of the election. BBC made a report on it.

Posted by Dave Brown at 2:57 PM No comments: