Iraq: key to permanent revolution in the Middle East 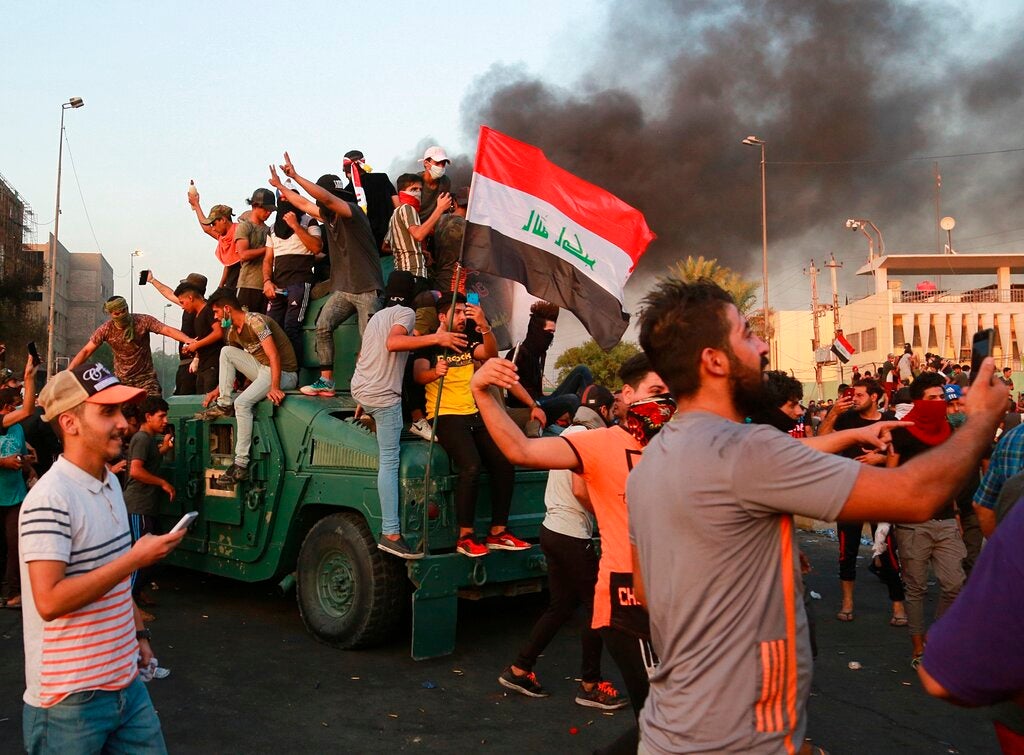 The October uprising in Iraq is the most recent expression of the aftermath of struggle of imperialist powers to win control of the region. Iraq was the main target of the US and Israel after the Mullahs came to power in Iran in 1979, because whoever holds Iraq holds the key to the Middle East and beyond that Central Asia. Just as the partition of the old Ottoman Empire in 1918 was a re-mapping of the region by the victorious imperialist powers, Britain and France, today the ongoing civil wars being fought across the Middle East to redraw the maps again, are symptomatic of a growing confrontation between two main imperialist blocs, the declining US bloc and the rising Russia/China bloc in a new Great Game.


This is most evident in the outcome in Syria where Russia and China have enlisted Turkey and Iran and client states to destroy the popular revolution of eight years. But it is equally clear in Yemen where the Houthi are in the Iranian camp on Saudi Arabia’s southern flank. It is also behind the attempt by Turkey to push back the Kurds from its border with Syria under the protection of Russia. And as if on cue, to ram home the message, the return to a popular uprising in Iraq is mainly directed against Iran as a virtual occupying power.
These wars are meaningless unless they are understood as proxy wars conducted across the whole Middle East in the 21st century Great Game between the US and Russia/China blocs. In all of these interventions it is the Russia/China bloc that is making headway against the US bloc. Russia has enlisted Syria, Turkey, Iran and Qatar, while the US is stuck with its two stalwart allies, Israel and the Kingdom of Saudi Arabia. And it’s plans for a Kurdistan as a client state are all but dashed in Syria, and in question in Iraq.
All of these regional ‘partners’ are conducting these wars, openly or covertly, with the backing of one or other bloc. Clearly, Russian intervention has allowed Assad to survive defeat at the hands of the popular revolution, and strengthened the hand of both Iran and Turkey in Syria. Temporarily setting back prospects for the re-opening of the Arab revolution signalled by the Arab Spring in 2011.
The Arab Spring from Bahrain to Morocco threw up movements for democracy that appealed for imperialist backing against dictators. These ‘liberation’ struggles in the absence of mass workers’ parties were led by national petty bourgeois and bourgeois factions to renegotiate the terms and conditions for semi-colonial exploitation (oil etc). These national bourgeois factions naturally did not want to risk their class interests by sharing the loot with mobilising mass movements. So they directed the civil wars towards deals with the US or Russia/China blocs rather than allow the working masses to come to power. For their part, the imperialist powers intervened when their national bourgeois clients wanted to jump ship and change masters. They all continue to act to change regimes or back up any client regimes under popular attack.
The US went into Iraq in 1991, followed up with punitive sanctions, initially to caution and punish their ‘man’ Saddam, and then staged a massive invasion in 2003 to remove him when he moved away from the US client by threatening to quit trading oil in $US for Euros. The US and its EU allies invaded Libya to remove Khaddaffi who was giving Russia oil concessions. In Egypt, Kuwait and Yemen, the US backed its preferred regimes.
In Syria, and the Kurd ‘autonomous’ region of Rojava, the US interests were not strategic except in relation to ISIS, allowing Russia and its proxies to increase their influence and stabilize some gains in the region. This leaves Iraq as the strategically contested ground where victory for one bloc seriously weakens the others’ control of Gulf oil, and which helps determine who rules Central Asia including Iran and Afghanistan.
The uprising in Iraq reflects the fact that it is ‘ground zero’ in the conflicts between rival imperialists for control of oil in the Arabian Gulf since the turn of the 20th century. Therefore, the battle for control of Iraq is key in determining which bloc wins at the expense of its rivals in the 21st century. This means that the uprising in Iraq against the influence of external powers, must become the basis for a revival of the Arab revolution across the whole of the Middle East and North Africa (MENA.)
The Syrian revolution has all but halted under intervention by the Russia/China bloc. The consequences of this for the fate of the Kurds in Rojava is central to spreading the lessons of the Syrian revolution to the whole of MENA. These are, that even the successful armed struggle to overthrow one dictator is not possible without first, uniting all the struggles of the working masses of MENA against imperialism, and second, the disabling of imperialist military occupations by the workers in the imperialist powers and their proxies. Neither is possible without the leadership of an international communist party embedded in the masses against imperialism and its national bourgeois agents.
The revolution has to ignore the imperialist imposed borders, old and new, and incorporate the masses of all nationalities and religions into one movement for permanent revolution. No single oppressed nationality can win self-determination under the domination and occupation of imperialism and their regional proxies. National and religious freedom can only be realised by the expulsion of imperialist powers and their agents, and the formation of a union or federation of socialist republics of MENA.
We face two directions, forward or backward. Either the masses are enlisted and used as pawns of one or other imperialist bloc in a race to the bottom, of genocide, ecocide and fascist destruction, or, the masses are won over to an international revolution against both blocs and their regional client states, to mobilise a regionalwide class war against imperialism and its agents, necessarily becoming a socialist revolution and the basis for an international socialist revolution.
Revolutionaries must defend the Arab and Kurd masses from all foreign powers, imperialist and semi-colonial!
No political support for any bourgeois regime or political faction as they all sell-out the masses for deals with this or that imperialist bloc!
Down with imperialist and UN fake ‘peace’ deals which serve the class enemy!
For a new world party of revolution based on Trotsky’s 1938 Transitional Program for Permanent Revolution!
For Permanent Revolution in all MENA  independently of imperialist imposed borders, and appeals to nationality, and religion, all of which claims can only be resolved by a federation of socialist republics!
https://www.allianceofmesocialists.org/solidarity-with-iraq-popular-protests-statement-from-alliance-of-mena-socialists/
https://iranfreedom.org/en/2019/10/12/quds-force-rule-suppressing-iraqi-people-iran-mek-ncri-pmoi/
First Published http://www.cwgusa.org/?p=2345

Posted by Dave Brown at 5:04 PM No comments:


Both right wing capitalist ideologues and sectors of the left that see the Chinese state as “socialist” (or a workers state) have come to a mutual agreement on the nature of the uprising in Hong Kong. For them, the uprising with its 5 demands (although they do not explicitly call for capitalist restoration) are portrayed as the drive to crush the communist or workers state. All these anti-worker tendencies see the actual mass movement as spearheaded by capitalist restorationists, Christians and adherents of the “color revolution,” all tied to the varied and numerous imperialist funded projects, be they evangelical capitalist/Christianity or NGO projects for ‘democracy.’ These anti-worker ideologues do not want you to see the actual features of the mass movement. They seek to convince you to slander it, to give military support to Carrie Lam and the crushing of the youth, as they do. The real, obtaining situation is as follows...