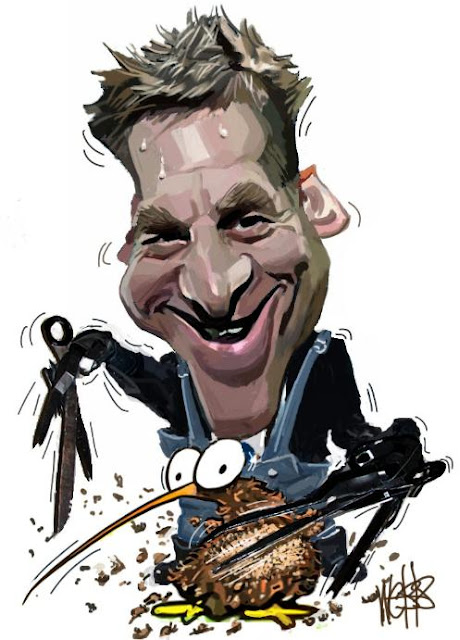 As we would expect from a NACT [National/ACT/Maori Party coalition government] regime backed by the Maori Party, the 2011 Bludgers’ Budget marked a further attack on workers to boost profits. The main attacks were on Kiwisaver, WFF, and plans for the ‘partial privatisation’ sale of state assets. Key boasted that he would create 170,000 new jobs, the same claim he made last year. Of course he is right - he subcontracted job provision to Australia while NZ lost jobs. Key echoed Treasury’s fraudulent claim that the NZ economy would grow at 4%, again same claim made last year, again reached by Australia, towed along by China, while NZ had negative growth. Which country does this guy think he is i: NZ, Hawaii, China or Australia? We, however, not being NACTites or LABOURites, see this budget as reinforcing NZ’s role as a cheap labour country with its assets being primed for sale to China. Welcome to the Great South Seas Islands.

Kiwisaver: State cuts back its contributions, appears to put the burden equally on workers and employers, but in fact allows employers to take it off wage increases.  Thus kiwisaver becomes like a US type worker contribution pension fund that will amount to workers saving for their pension, with companies contribution deducted from their wages, while at the same time the state will cut back on Govt Superannuation, raise the age of entitlement etc/, thus shifting the burden of paying for retirement entirely onto workers. That amounts to a real wage cut and a rise in the rate of exploitation. If Kiwisaver is privatised then workers may end up like US workers who have had their corporate based pension schemes worth billions expropriated to bail out company bankruptcies. Privatised pensions have fine print which says the bosses own your retirement as well as your working life! The only secure retirement for workers is to expropriate the expropriators, not only the pension funds but all the corporate wealth the workers created through their generations of labour.

WFF: Working for Families was a Labour Party policy to redistribute tax (actually a tax rebate like the old rebate for children) to workers who had families. So it’s part of the welfare system. The NACTs opposed it when it was introduced but then left it in place until now when they have reduced the rebates slightly for families on higher incomes probably because this is ‘middle NZ’ and potentially NACT voters. And lots of other nasty, mean cuts where it hurts.

Privatisation: NACTs propose the partial privatisation of a number of specified State-owned Enterprises – namely the four major power generators, Solid Energy and Air New Zealand. In an attempt to head off popular opposition to privatisation the NACTs propose ‘partial privatisation’ i.e. 49% private ownership 51% retained in public ownership. These are major corporations with good returns. So what the NACTs are doing here is grabbing nearly half for their own class, here and overseas. They are trying to sweeten the pill by saying ‘mum and dad’ investors will get preference and this will boost kiwi ownership and the NZX. Well, those mum and dad shares will be gobbled up by corporates damn quick. Campaign Against Foreign Control of Aotearoa [CAFCA} has a good critique form the standpoint of NZ social democracy, that state ownership implies more public control than private foreign ownership.  In fact nationalisation is a form of collective capitalist ownership since the state is the state of the capitalist class. What nationalisation does, however, is facilitate workers control as a step towards the socialisation of capitalist property. So the answer to the NACTs ‘part privatisation’ plans is to fight for nationalised property to be under workers control and for the big private corporates to be nationalised, without compensation, and under workers control.

ACC: The NACT wants to privatise Accident Compensation; another step towards destroying the working class as the only force able to stop social barbarism and human extinction. The whole point of privatising is to open up lucrative business to bosses and make the workers pay for it. It’s an ideological reform sure, but it’s driven at every level by profits. Ideas don’t exist without material roots. Bosses are looking to drive down the costs of insuring workers on the job and paying for their accidents off the job, and insurance companies are looking to make more profits from user pays. The pro-market ideology is just that. They want ACC privatised to shift the cost onto workers. Reformist complaints about the ACC meeting some noble ideal of the ‘community’ sharing the cost of accidents is a nonsense for capital which uses up the flesh and blood of workers, exhausts nature, and drives humanity towards extinction, to make a profit. Social democratic appeals to some redeeming feature of capitalism is merely avoiding the calamity and weakening our ability to stop it in time. What has the Labour Party got to say about this Bludgers’ Budget?

Labour opposes the cuts in the Bludgers’ Budget but has not committed itself to restoring them. It has made a point of saying that some cuts would still be necessary given the worsening debt situation. It has promised a small tax increase for high income families and to impose the Environmental Trading Scheme [ETS] on farmers in 2013 to raise $800 million over the next four years for R&D. It committed to raising the minimum wage from $13 to $15 on hour. NACT and big business hit back with claim that this would lose 5000 jobs unless Youth rates were reintroduced. Labourites have countered with research that showed that raising the minimum wage in the US and in NZ did not see rising youth unemployment as hours worked by youth increased (see Tapu Misa).  These research findings prove the Marxist view that rising wages are the spur to growth in economic productivity as employers are pressured to introduce new technology and raise labour productivity to increase profits. The immense growth of capitalism over the last 150 years arises from this pressure.

The Labour Party recognises the importance of labour productivity growth but but does not see this as increased exploitation of labour and limits itself to strengthening organised labour to win a larger share of income. Yet the statistics show that in NZ the productivity share of workers has declined to the point that even real wages have fallen. While Labour’s reformist perspective of maximising workers income shares in the imperialist epoch of capitalism in decline cannot stop mass poverty, at least it is not openly complicit like the Maori Party in the NACTs bosses’ agenda of NZ as a low-wage-asset-stripping country competing directly with other low wage countries!

For the NACTs a ‘workers budget’ is what they have to produce at the WINZ office to prove they are not ‘bludgers’ and can qualify for a benefit. Enough! The real Bludgers’ Budget is part of the NACTs attack on workers to create a cheap labour force and smash resistance to privatisation and asset sales to China. Labour has yet to take a stand on a Budget that puts workers needs before profits. The Green’s 5 point alternative budget has some immediate aims but spoiled by its dream of managing capitalism as a “sustainable, prosperous and fair economy” when it has to be overthrown as a precondition to our survival.

The closest we got to a Workers Budget in Parliament was when Hone Harawira of Te Mana Party described the Bludgers’ Budget as the “Key / Turia / Brash “Watch me clap while my people get shafted again” Budget. I have seen GST go up, food prices go up, petrol prices go up, house prices go up, unemployment go up, while the only thing to come down is taxes for the rich, and I intend to propose a radical way forward that will: • ease the plight of the poor • scare the shit out of the rich • and give Maori hope for a better future.

Reverse the  cuts! Occupy the foreshore and seabed!
Occupy all workplaces that close or sack workers!
Nationalise all corporate assets without compensation and under workers control!
Build workers councils everywhere!
For a general strike against the system that is destroying us all in the name of profit!
We say outrage > revolution > expropriation > socialism!
Posted by Dave Brown at 4:21 PM