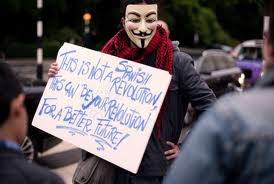 The revolution will not be twittered says a facebook friend. To which we answer: #tahrir #spanishrevolution #Libya #Yemen #Syria #italianrevolution #frenchrevolution #palestine etc. What is happening in Spain, Portugal, Greece, Italy, France and elsewhere in Europe, is the opening of a social revolution promoted by social media, inspired in part by the Arab Spring, the pro-democracy revolutions in North Africa and the Middle East, and also by the 'outrage' sparked by the treacherous role of social democracy. But all of these uprisings have their roots in the resistance of the labour movement to capitalist austerity coming up against dictatorships as in the Middle East and North Africa (MENA), and the failure of institutionalised social democracy to stop austerity, as in Spain, Portugal and Greece.

This has led to the mobilising of unemployed and educated youth by means of facebook and twitter against these austerity regimes. In MENA the unions have been outlawed or repressed by the dictatorships. In Europe the unions have been tied to social democracy to act as barriers to mass mobilisations. Ostensibly, these uprisings take the form of democratic revolutions rejecting the political system and main political parties that are ‘owned’ by the banks, or by corrupt dictators. There is a common opposition to being mere ‘commodities – bought and sold by the banks’ with no political rights. A moment’s reflection shows that rejection of fraudulent politics ‘owned’ by banks and corrupt politicians is objectively targeted at the heart of capitalism at a time when to survive it has to force young workers to work for slave wages to pay for its structural crisis. We can therefore see that the content, if not the form, of these uprisings are in fact the opening shots of potentially anti-capitalist and socialist revolutions. This seems to be taken for granted on the streets and is reported in the mainstream media. What is not yet widely understood, is that these revolutions, to meet the demands of the youth and other working people, must become openly socialist to succeed, and failing that they will subside into defeat and worse, counter-revolution.

So what has to happen to make these revolutions succeed? There are many competing theories and programs on offer each putting forth a program for success but we can roughly put them into three categories, liberal, radical and Marxist.

If we start with the liberal reformists such as Democracia real Ya! their program asks for no more than making capitalists pay their fair share of austerity rather than imposing it upon the youth and other workers. Their understanding of capitalism is at the level of distribution. They don’t want to be bought and sold by the banks, but do not object to fair wages paid by fair employers. So these street reformers have rejected the institutionalised reformists such as the Spanish Socialist Workers Party, who they see as ‘owned’ by the banks, but they are not opposed to the masses creating new parties or backing more radical parties, to challenge the excess power of the finance sector. They are not anti-capitalists. This is the stage that the Egyptian revolutionaries have reached. They are negotiating with the Supreme Command of the Armed Forces (SCAF) to prevent the old parties, notably the PSA of Mubarak, and the Muslim Brotherhood, from dominating politics and open the elections to the new forces for change. Its reformist objectives embrace both secular and liberal Islam currents. These street reformists will quickly find their liberal assumptions will be put to the test as they come up against the class nature of the state which is to manage exploitative class relations on behalf of the ruling class. So if the European uprisings that we are now seeing spreading from Spain and Portugal to Greece and France etc are in part inspired by the MENA revolutions, then the reformists will quickly learn the lessons of those revolutions as the struggle to make even the most minimal changes to the existing ‘system’. The reformists will be radicalised as anti-capitalists.

The second grouping is of the anti-capitalist radicals who speak of the need to make a revolution to overcome capitalist exploitation and oppression but without taking state power. This includes a range of modernist political currents from anarchist, autonomist to indigenous and Islam. They view really existing capitalism as exploitative at the level of exchange. To get profits bosses pay workers less than the value of their labour. The state is totally complicit in its legal backing of this unequal exchange. Typically Radicals think they can defeat the power of the autocratic state by non-violent mass movements that refuse to play by the rules of existing institutions. Therefore to break with the state and the law mass resistance is necessary in refusing to work as wage slaves. The state will try to smash resistance to work by bringing out the police etc, but resistance on the street and workplace will destroy the state’s legitimacy so its moral authority will dissolve and with it the employers ability to enforce unequal exchange.

The pitfalls of this radicalism all flow from its exchange analysis. The masses cannot impose a radical reform that equalises exchange without a social revolution that means overthrowing the capitalist state. The capitalists and their state are not constrained by a morality that acknowledges unequal exchange. They think they have the total right to impose their property rights on workers and to force them to work, and will use the state to smash resistance unless it is organised as a revolutionary power capable of defeating capitalist state power in an armed struggle for socialism. The danger of radical anti-capitalism is that young workers won’t learn these lessons until they have been defeated. To avoid this danger it is necessary for Marxist revolutionaries to use the conditions for intense ideological struggle and  debate to convince reformists, radicals, and non-Marxist socialists that they need a Marxist program for revolutionary socialism.

While the liberals think that capitalism can be reformed to produce a fair distribution of income, and radicals think that capitalism can be reformed to produce equal exchange of value, Marxists understand that capitalism is based on fundamentally unequal production relations that have to be overthrown before social equality is possible. But this is not a consciousness that can be arrived at spontaneously by camping in the city square or even by heated ideological debates. Capitalism is able to hide its exploitation at the point of production by turning production relations on their head as exchange relations which makes it seem that individuals can be made equal by getting paid the full value of commodities they produce. Marx called this commodity fetishism because instead of labour-time being seen as the measure of value, value now appeared to be inherent in the commodities themselves. Marx discovered that while workers got paid the full value when they sold their labour power for a wage, that unique 'queer' commodity is able to produce more value than its own value.

The result is the expropriation of surplus value from the working class in the production process. Surplus value is the source of profits, and when insufficient surplus value is produced profits fall. When profits fall capital is not invested in production but in speculation in existing values. This causes price bubbles in excess of values that must go bust. Capitalist crisis therefore begins at the point of production not in the banks which must go bust when the speculative bubbles burst. Thus the role of Marxist revolutionaries in the revolutions that have begun in MENA and Europe is to critique liberal and radical reformist politics as unable to confront the basic cause of capitalist crisis and austerity – capitalist social relations and the state which exists to reproduce and enforce those relations. Marxists explain what causes the ‘outrage’ and ‘indignity’ and also what must be done to eliminate that cause by means of socialist revolution.