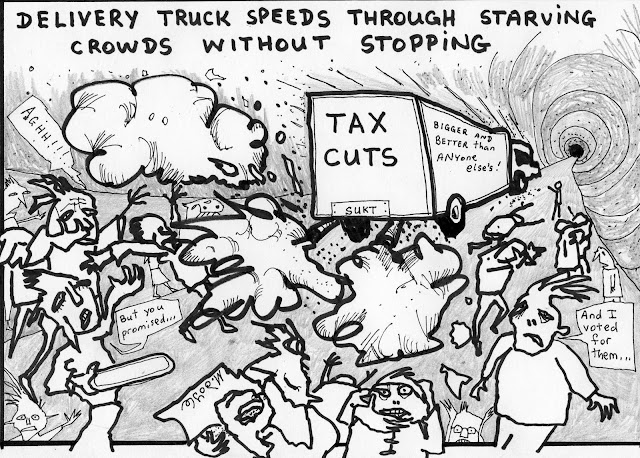 The NZ state under capitalist pressures (tendency for fall rate of profit and periodic crises) tries various restructuring of healthcare to shift health costs onto working people; thus reducing the proportion that the state pays. This serves the capitalist class by reducing their taxes and propping up their otherwise falling profits (which the working class produced anyway). NZ capitalism has cut health care costs in 2 main ways – cutting wages, and cutting funded services.

In mental health services ‘trusts’ were created for the purpose of providing services to ‘clients’ who were no longer provided for by public services. This occurred at the same time as institutions - hospitals were closed. Community care has always been on a tension with community dumping (neglect) and the state driving down wage bills by contracting services into private has been the underlying dynamic to this. Fortunately for the state this occurred at the same time as rising education and skill levels (% passes in education have steadily increased). So this change may have been able to be done without a noticeable loss in quality of care. However, occasional media exposure of extreme cases of rest home neglect shakes confidence in these services.

In the starting positions care giving roles “health aide” or “community support worker”, the wages are near the state’s minimum wage level; competitiveness for jobs, and lack of union organisation maintains this situation. The capitalist state runs with an unemployed “reserve army of labour”, and the Employment Contracts Act and scattered / smallness of sites allowed employers to keep unions out of many new trusts.

The access to fully funded free services has been made more difficult. Health services were not funded to meet the needs of the population and so waiting lists became a typical experience of trying to access public funded services. Increasingly emergency departments turn away patients – sending them to private 24hr GP clinics instead. A new definition of an emergency is a barrier to free health care. Currently the District Health Board covering Queenstown is proposing a deal with local doctors (GP) whereby “emergency” patients will have to see a primary health practitioner (Dr / Nurse, etc) before being passed onto the emergency service. A private health service is allowed to charge a fee to the patient, so the state’s proportion of health services decreases.

The policy of primary healthcare, was Labour government policy from 2000 – 2009. “Primary” is the frontline doctor the “General Practitioner” (GP) who most people first see for a (non emergency) health need. Government had tried to shift services from fully funded public hospital based services to GP and non-government organisation (NGO) providers. This cut costs for the state since generally NGO’s were paying frontline workers less than the equivalent public services had.

While the Labour government shifted some money (funding) to GPs they also tied GPs to contracts for their enrolled ‘patient’ population. Contracts forced GPs to provide after-hours “medical” services. GPs were grouped into larger organisations “PHOs = Primary Healthcare Organisations”. This centralised and concentrated their resources into larger organisations. PHO’s had brought forward proposals to take over some functions from the Public Health system, for example, district nursing. Maori health was also organised into Maori PHO’s and so a layer of Maori managers has been created while frontline workers remained low paid. Many Maori organisations were able to super-exploit their workforce – extolling workers into longer hours and more, while re-defining cultural values to ‘do it for the whanau’.

The working class approach to healthcare is that this is a basic human necessity and fair access for all is essential. The capitalist class has no interest in providing this. Organised workers were able to force a Labour government into providing public health services in 1935. This has steadily been undermined by the capitalist class complaining about their falling profits and the costs of providing healthcare and using the state to dismantle the welfare state. Capitalists push user pays reforms through their governments.

The fact of private healthcare still existing in NZ, points back to a failure of the first Labour government to bring all Health services under public funding. Doctors or GPs were never fully in the public system, specialists always wanted to charge their own rates. GPs in the poorer areas of the country raise less money in fees from their enrolled patients, instead relying on government for the most part of their funding. Whereas GPs in the richer areas can charge higher fees and so rely less on government funding to provide service and take profits. The danger with this de-facto introduction of “user pays” health care is the access to services is unfair and quality of service uneven (eg. more GPs per person in Remuera than in Manurewa). Primary healthcare has always been mainly user-pays because of privatisation of service providers. It is an individualistic model of healthcare where the user is forced to pay.

Under crisis capitalism, the government is rewriting the rules for entry into health services and so keeps more services out of public health sending patients out to their GPs – to pay. Each winter the District Health Boards have urged people to stay away from Hospitals’ emergency departments as they struggle with staffing shortages and winter illnesses.

It is clear that capitalism will not consistently provide usable and accessible health services. Health workers (Doctors, nurses and the rest) cannot defend public health alone. We need to unite with the working class to fight effectively for full public health services. The capitalist system must be buried before it buries us. The principle for organising the new economy is, from each according to their ability to each according to their need: Socialism.
Posted by Dave Brown at 4:48 PM