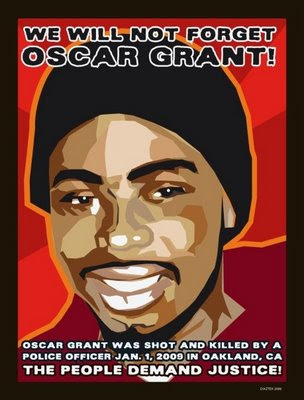 DEFEAT THE BOSSES’ GANG IN BLUE!

NO ILLUSIONS IN POLICE REVIEW COMMISSIONS!

Oscar Grant's racist murderer, Johannes Mehserle, is to be released on Monday June 13. As could have been predicted, the racist legal system protected the killer cop from any semblance of "justice". Last November, Judge Robert Perry of L.A. Superior Court sentenced the former BART cop to two years in jail for "involuntary manslaughter", after he shot Oscar execution style, as the young father lay handcuffed face down on a BART platform New Year's Eve 2009. A racist murder was reduced to a mere mistake.

Seeking a whiter venue, the trial was moved out of Oakland. And while the demographics of Los Angeles is 25% Caucasian, 75% of the jury in Mehserle's trial was white. No potential black jurors who had any encounters with police were allowed to serve - while white jurors who had friends in the police department were selected. The jury found that Mehserle should serve additional time for using a gun in the crime (14 years for gun enhancement), but Judge Perry rejected the jury's finding. He gave Mehserle a slap on the wrist with a two-year jail sentence. In the “land of the free”, a black youth charged with a similar crime would be sentenced to jail for life - if not death row. But with "credit for time served", Mehserle will be set free after serving a mere 11 months of a two year sentence.

Even as we head into the 21st century, the United States - with its "progressive" liberal enclaves like the S.F. Bay Area - deepens its global reputation as one of the world's most racist nations. In Oakland we do not forget the unarmed youth Jerrold Hall who was killed by BART cops 18 years ago. The world will never forget the images of Rodney King bludgeoned to within inches of his life by a gang of racist L.A. cops. It will never forget the images of stripped and hooded prisoners tortured with phosphoric acid at Abu Ghraib. And now despite the cell phone videos of the killing of Oscar Grant on the internet, his state-backed racist executioner will walk the streets a free man on June 13. The verdict is in, the bosses courts protect the bosses thugs. FOR JUSTICE THE WORKING CLASS AND OPPRESSED COMMUNITIES CAN ONLY RELY ON OURSELEVES!

Last October, the longshore workers of the ILWU shut down all the ports of in the Bay Area in opposition to the racist verdict in the Meserle trial. While the demands of that one day action: "Justice for Oscar Grant / Maximum Sentence for Johannes Mehserle" were not achieved, they created the kind of united front action, linking the struggle of oppressed communities, youth and labor that makes the ruling class tremble. When labor/black and brown communities come together and take strike action against the oppression of the state the ruling class control is challenged. That is why today the bosses are coming after the ILWU 10 for their subsequent April 10th political strike. Violent police brutality and racist cop murder will continue to be a feature of everyday life in the U.S., just as U.S. imperialist military interventions abroad will continue until we link our youth and community organizations, our marches, and rebellions to organized labor and launch class war against the exploiting class-the top 0.01% that own it all and control our labor power. Only organized labor actions can challenge the capitalist system, their racist courts and cops. In 1934, the dock workers of San Francisco responded to cop murder of a longshore worker by organizing the San Francisco General Strike, shutting down the entire city and most of the Bay Area. Likewise today, to achieve Justice for Oscar Grant we must demand: