US: Make the banks, finance houses and the corporate elite pay! 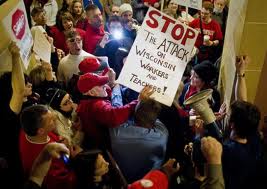 Across the nation the states and localities are incapable of meeting their obligations. The elite and their pit-bull, the Tea-Partiers, have targeted the last bastion of union strength, the public workers unions. Today the front line is in Wisconsin but workers know the same crisis in Wisconsin effects us all. The Democrats led by Obama, no less then the Republicans, are bent on destroying the gains made by unionized workers. From the ongoing furloughs effecting 65,000 state workers in California (enforced by labors choice Governor Brown), to the freeze on federal workers’ pay in the 2012 budget proposal, the Democrats stand firmly on the side of austerity for the workers and the poor and for bail outs and tax breaks for the bankers and corporate elite.

Today Arne Duncan announced the only way to save the Detroit schools is to close half of them and increase class size to over 60 students per class; and this, after bailing out GM in a deal that forced down autoworkers’ wages. The attack in Wisconsin today, the furloughs we still suffer across the nation and Governor Brown’s proposed 10% cuts in wages, are all part of the corporate elite’s need to enforce the crisis on the backs of the great majority while the top 1% and their well paid lackeys enjoy bloated stock portfolios, and shiver at the thought that the American workers might learn from the Egyptian workers currently forming unions, occupying factories and throwing out their bosses.

Today big capital moves freely across borders, moving funds from the industrialized world to the neo-colonial world where production at the lowest wages possible, inflates Wall Streets profits, leaves the local workers in Dickensian conditions all the while abandoning the industrial and manufacturing base in the “first world”; which previously afforded the working class the means to view itself as “middle class”. The “free-market” today can no longer afford both the profits demanded by the owners of capital and the comforts the misnamed “middle class” has come to expect: a job-with benefits, a vacation, a semblance of health care, a defined pension, half-way decent schools, affordable public higher education, affordable gasoline and home heating oil. The tendency of the rate of profit to decline (the law of diminishing returns) has put the squeeze on the corporate bottom line and they, in turn, have “no choice”- their fiduciary responsibility is to the bottom line and the next quarterly statement.

Since the onset of the crisis we have heard the public workers unions’ leaders set the tone calling on their membership to “share the pain”. Today in Wisconsin we hear the echo of the “share the pain” jargon as the union leaders beg for understanding in the media, “…we are willing to concede on wages…” their real message is “…just let us keep the right to take members dues, give funding to the Democrats and prevent the workers from taking strike actions, which might upset the status-quo”. These union leaders are entrenched and committed to the lie that there is no money, that cuts are inevitable and that labor has to make concessions even after pouring millions of dollars and volunteer hours into the election of Democrats each election cycle. Just a few weeks ago, SEIU 1000 president Yvonne Walker, speaking on KQED, said she supports Brown’s proposed pay cut for the 65,000 workers still without a contract. This is no surprise, as it would subject workers in other state unions to the same rotten deal she sold her own members.

Selling out private and public sector workers alike is the task taken on by the CA AFL-CIO leaders. Autoworkers will remember when they came down to the NUMMI plant in Hayward during the firing ceremony for 5,000 workers to assure the Democratic politicians, also in attendance, that capital could abandon labor without fear of labor abandoning the Democratic Party. Workers need our own political party one willing to fight, by any and all means, for a workers government committed to human need not to preserving corporate profit.

Fake “tax the rich” and tax reform scam leave control in the hands of the rich!

Today these same labor leaders are joining with the Democrats again, this time to misdirect our union members into a feckless campaign to advance so-called tax reform instead of mobilizing for what we really need to do to fight back: organize widespread, prolonged strikes and build for long overdue independent political action.

Labor leaders and fake socialists like Alan Benjamin of Socialist Organizer, and Connie Ford of the SF Labor council have joined forces with the Democrats to demobilize the working class by directing us into useless plans to solve the capitalist crisis on Wall Street’s behalf by campaigning for so-called “progressive taxation.” What this amounts to is the working class telling the capitalist politicians how to administer the collapsing system that is victimizing us all, instead of working to replace it with an economy based on human need not quarterly profits.

Calls for “tax the rich” foster the illusion that the social problems of our country (not to mention the global economic crisis) can be solved by getting wealthy people to pump more tax dollars into government coffers. This begs the question, whose government, and whose interests does it serve? Do the “tax the rich” proponents really expect us to believe that governments controlled by the plutocracy will spend increased tax dollars on meeting the needs of workers, the poor, and the oppressed? If that were what they wanted to do, they could do it without increasing their own taxes, by calling a halt to their ruinously expensive criminal military adventures in Afghanistan, Iraq, and Pakistan; ending aid to Israel and other repressive foreign governments; and ending the billions of dollars spent annually on various forms of corporate welfare.

Of course “tax the rich” reform is not going to be enough. This worldwide economic collapse is much deeper than even the most liberal Keynesians will admit. If the capitalist class could dig themselves out of this hole by simply spending public funds to put people to work, they would. But today it is so hard for the capitalists to make a buck in the market, they have replaced productive activity with what they call “financial services,” which basically means gambling on speculative bubbles for profit. Equities, real estate, and commodities all have gone through their bubbles as capital chases from one popped balloon to the next super inflated sector.

The capitalist class has abandoned the social contract, which read something like this: “Allow us (the capitalists) to own the capital and invest it productively, according to the dictates of the market, and (Adam Smith willing) there will be work for everyone, profit will abound, bankers and bakers will all be happy, and the invisible hand of the ‘free market’ will keep the boat of the economy afloat.” Well, that was fine for a short period but today there is too much paper capital seeking a diminishing volume of profit, leading to the cannibalism of the speculators. Seeking paper profits based on inflated values of a non-productive economy, western capital has no choice but to collapse the historic gains of the working class, because workers cannot eat, wear, or live on paper profits.

To meet the needs of workers and ordinary people, and maintain a healthy economy, the resources of our society must be put to work producing real goods and services, not paper profits from gambling. But capitalism is no longer capable of investing in industrial production in developed countries, because workers’ relatively high standard of living in those countries means more profit can be made elsewhere.
Thus, the only way to direct our resources back into providing real goods and services is to take capital out of the hands of the speculators. This is the historic task of labor – one which the leaders of the labor have abandoned. Instead, they convene a conference with the likes of Lenny Goldberg, executive director of the California Tax Reform Association, who favor Brown’s austerity fake “tax reform” and increasing the collection of the sales tax from online retailers – a regressive measure, as sales taxes are charged at a flat rate to all purchasers regardless of their income.

Abandoning the class struggle, the SF Labor Council instead joins with the other labor tops to misdirect workers into putting their efforts behind Brown’s tax and cut plan, this is a strategy of defeat!

Where are the labor leaders who embrace the fight for an indefinite general strike, instead of carrying water for the Democrats?

Where are the leaders willing to fight to nationalize the banks and major industries under workers’ control?

Where are the leaders who will mobilize the masses for full employment under the demand “30 hours work for 40 hours pay”?

Where are the leaders who remind the workers of their historic task, link our struggles to the students, the unemployed, the elderly the homeless, both across the nation and the world?

Obviously, they are not in the top ranks of the SF Labor Council, the California AFL-CIO, or the Change to Win leadership. Those folks are too busy celebrating their unholy alliance with Jerry the Butcher to get down to the barricades and wage a real struggle. For labor to win we must revitalize our unions with new leadership ready to fight for the historical interests of the working class, forge an independent fighting workers party preparing to take economic and political power by engaging in internationalist solidarity and class struggle methods!