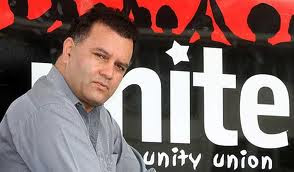 What is going on here? Are McCarten, Bradford and Harawira going to found a New Left Party? What happened to the New Labour Party that morphed into the Alliance? Will a new NLP be based in the unions? It looks like Unite Union national secretary McCarten had a new party in mind when he stood as a candidate in Mana. Only the unions have the base to put up candidates to the left of Labour but most unions support Labour. Yet McCarten wasn’t nominated by his union base, he nominated himself. What’s the bet that a NLP will also be founded without any attempt to form a mass base?

McCarten can probably rely on the Unite membership base, but Bradford and Harawira are not currently involved in unions. Will a New Left Party go down the same parliamentary road as the old New Labour Party trying to push Labour to the left? The New Labour Party failed, and so will a New Left Party. McCarten got around 3.5% of the Mana vote. We don’t give critical support to another attempt to create a New Labour Party that says NZ capitalism can be reformed. It will become the tail of the Labour parliamentary dog. We want a workers’ party with a socialist program that only uses parliament only as a forum and a sounding board to expose it as a sham and to raise the banner of the socialist revolution.

The Labour left on The Standard blog is pushing for a ‘new economy.’ What’s new? Touting 19th century Fabian solutions for the 21st century? How are these different from the Fabianism that was the ideology of parliamentary socialism in Britain? Trotsky identified Fabian intellectuals as the ideologists of the British Labour Party in the 1930s. In NZ Fabianism arrived in NZ in the 1890s. W.P. Reeves was a Fabian. State management of the economy was necessary in a young colony since the market was hardly formed. The land had to be converted into private property via state dispossession. The biggest theft of Maori land occurred under the watch of the Liberal Party Fabians. Workers had to be regulated into a labour market via the Industrial Conciliation and Arbitration Act, later called ‘Labour’s leg-iron’ by Harry Holland. It was W.P. Reeves’ baby. The colonial capitalists ‘pork-barrelled’ (insider-traded) the economy by electing themselves as legislators. Reeves got a road put into his farm (inspiring the notorious labour rat FP Walsh who became the biggest dairy farmer 50 years later).

The Reevesites used the state to establish a national capitalist class through state protection and insulation - a tradition picked up by the NZ Keynesian W.B. Sutch during the 30s depression. Sutch was the intellectual grunt behind state intervention first in the Reform Government of Coates, and then the first Labour Government of Savage and Fraser. He had a second go as head of Trade and Industry during the Second Labour Govt of 1957-60.

The Lange Fourth Labour Govt facing a deep crisis that had built up during the 1970s, rejected Keynesianism for the neo-liberal market reforms in the 1980s. NZ’s economy was deregulated and bought out by Australian and US multinationals. It suited the MNCs but not the working class whose living standards plummeted. Only now facing a new global crisis of capitalism is Labour turning back towards weak-kneed Keynesian type policies to manage the economy. It is being egged on by its coterie of left intellectuals who have revived their state socialism brand as Fabian lectures.

Today, the NZ state acts openly for international capitalism and no significant economic sovereignty survives. In a hundred years NZ has gone from infant capitalist colony to a clapped- out capitalist semi-colony. Instead of becoming a state of Australia in 1901 when the other states federated, NZ struck out (in both senses) on its own because the Liberals under Seddon and the social imperialist Fabians had visions of NZ capitalism as a little England with its own Pacific empire. Of course these were infantile delusions, so that today far from being a minor imperialist power lording it over tiny Pacific fiefdoms, NZ is virtually a colony of Australia without the benefits of Federation over 100 years. Catching up with Australia is therefore impossible and futile.

NZs future therefore is more like that of the historic Latin American semi-colonies of the US and European powers. If you want a current model to revive economic nationalism look to the Bolivarian states in Latin America and see that none of these states can evade subservience to the big foreign powers. What we see in Latin America is a contemporary Fabianism, or a managed national capitalism, that has failed to escape US domination, but switched from US subservience to Chinese subservience.

Illusions of the NZ Bolivarian Left

It’s not surprising then to find that McCarten is a strong ally of the Australian Green left which pins its hopes for socialism on the Bolivarian revolution in Venezuela. Hugo Chavez advocates a 21st century socialism that is not tainted by that of the 20th century. Yet this ‘socialism’ is no different from the state socialism of the Fabians of the 20th century. It is essentially no different from the Alternative Economic Strategy of the CTU. The AES which is a predicable wish-list of reforms that sees workers taking a larger share in the ‘productivity’ of their labour. From this rising share of wages would come more jobs, education, health and public housing. This is also the broad reformist program of Bradford and Harawira addressing the needs of working people and of Maori.

They make no mention that this increased income share going to workers is the result of rising exploitation and that workers are entitled to all, not just a larger share of the value they produce. So the differences on the left of Labour are not over reforms as such but how far those reforms go and how they can be implemented. Those who identify with the Bolivarian left are pushing for more mass involvement in politics so that more major reforms are possible. They point to the success of Chavez and Morales in Latin America who have been elected to power on big popular majorities.

What they don’t say is that the populist policies of these leaders of sharing the wealth that workers produce, serves to justify the right of capitalists to expropriate their profits from workers’ labour. Workers become subordinated to popular fronts which are dominated by bosses and prevented from organising independently to overthrow these regimes. The irony is that Chavez now talks about 21st socialism as being similar to Chinese ‘market socialism’ when China is now the new imperialist power that is in strategic alliances with the Bolivarians to contain the masses so it can extract its super-profits.

We need a World Party of Socialism

Economic independence will not come from belated attempts at economic nationalism by a rump fraction of the national bourgeoisie that exploits xenophobia to keep the working masses under the control of a section of the national bourgeoisie, the ‘boli-bourgeoisies’, but the opposite. Instead of the race to the bottom where isolationism and protectionism leads inexorably to wars over diminishing resources, real independence from the dominance of the US or China today will only come by workers in every country uniting to overthrow their ruling classes and building international alliances to plan production on a global scale to provide for the needs of the masses without destroying the planet.

NZ at the beginning of the 21st century is a semi-colony of Australia and the US, and increasingly China. Economic nationalism is a reactionary utopia (or as we say these days a dystopia) because to even begin to realise it, workers have to voluntarily submit themselves to slavery, poverty and misery. The time has come for workers to organise independently of the state, and its parliamentary road, and build a mass Workers Socialist Party, affiliated to a new world party of socialism.
Posted by Dave Brown at 10:54 AM