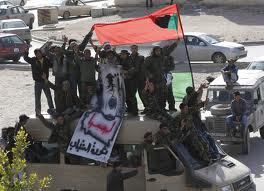 The US and EU are planning a military intervention to protect their oil interests!

Libya is on a knife edge poised between victorious workers revolution that can defeat both the dictatorship and imperialism, and turn the Arab Revolution into socialist revolution in the whole region, and the counter-revolution that will halt, reverse and defeat the Arab Revolution and prevent the formation of a United Socialist States of North Africa and the Middle East. The outcome will depend on whether or not the international working class can stop the US and EU imperialists from invading Libya and imposing a new compliant national leadership.

The uprising of unemployed youth has won control of much of the country by sacrificing their lives in the thousands to the Gaddafi dicatorship. Not until the youth had stormed the military base in Benghazi and taken the airport did the Libyan army split and sections of it come over to the rebels. Even then the Generals and Ministers who defected did not take command of the situation and organise a national popular militia to defeat the regime. This tells us much of the old guard that is thoroughly discredited by its immersion in the dictatorship and which should not be trusted an inch. It has been left to the worker youth who armed themselves and the ranks of the military and other workers who have joined them to form local militias.

The gains of the revolution are entirely due to the sacrifice and martrydom of the unemployed working class youth. First in Tunisia to the West where youth laid down their lives to remove the Ben Ali dictatorship. And in Egypt to the East where the youth sufferred more than 1000 martyrs to remove Mubarak. Now the Libyan youth have lost 1000s of dead to seize the leadership of the Arab Revolution. They have led the furious fight that has brought down on them the military might of the Gaddafi regime.

Such was the ferocity of this repression, employing the special forces and foreign mercenaries, that its failure to intimidate and defeat the unemployed youth rebellion forced the military to split. The defection of the Generals who had long been cronies of Gaddafi was forced only by the rebellion of the rank and file soldiers who refused to fire on the masses and were in turn executed by the Gaddafi forces.

The young workers proved themselves to be the leaders of the workers' revolution and they alone must form the backbone of a national popular militia drawing on the workers, the poor farmers and the soldiers. The working class internationally must make the Libyan revolution its own revolution to prevent imperialism from intervening on the pretext of 'humanitarian disaster' to roll back the advance of the revolution and install a new regime that retains the oil wealth for imperialist super-exploitation.

In the last analysis, the violence of the reaction of the regime to prevent a revolution at all costs is the creation of imperialism and its subordination of the Arab countries to dictatorships to maintain its economic dominance. In Libya it is unquestionably oil that interests imperialism, and its current concern to stop a 'humanitarian disaster' is entirely motivated to prevent a revolution from coming to power and kicking out its oil companies and socialising Libyan oil for the benefit of the people.

We call on the ranks of the army, the airforce and navy who have defected to the opposition to take their place in the popular militia and turn over their weapons, planes and ships to the cause of the revolution.The terrorisation of Tripoli must end. Use the ships to bombard Gaddafi's compound in Tripoli! Use the planes to strafe the armed goons who are driving around in their SUVs murdering unarmed youth with impunity!

We call on the Arab revolution that is under way in Egypt and Tunisia, and is beginning to rise up in Algeria and in the Middle East, to immediately send material and military aid to the liberated part of Libya to strengthen the revolution against the regime's extreme repression, to complete the revolution and stop mass murder of workers on an even greater scale.

We call on the workers in the imperialist countries to take immediate steps to oppose the military intervention in whatever form in Libya. Imperialism is the No 1 enemy of the Libyan people. Gaddafi is a creature of imperialism. His 1969 revolution had the guise of a national socialist liberation but in reality it installed a national bourgeois crony capitalist regime to serve imperialism.

All those who on the left who gave support to Gaddafi in the name of Communism or Trotskyism and were responsible for disarming the Libyan people in their long resistance to Gaddafi must be exposed and condemned.  They share a large part of the blame for the failure to build a revolutionary workers party in Libya and the others states of the region to play a leading role in the Arab Revolution.

No to aerial overflights!

No to cynical US, EU and UN military invasion in the name of 'human rights' which are always sacrificed in the interest of the oil monopolies!

For international workers support of the Libyan revolution!

For material and military aid to the revolutionary working class fighters!

For strikes and mutinies to stop any imperialist intervention that will only take over the counter-revolution from Gaddafi and defeat the revolution in Libya and stop it from setting an example for all the world's workers to follow!

For an international revolutionary party to coordinate the struggles of workers, youth, poor farmers and street vendors in every country!

Forward to the Socialist Revolution in Libya that socialises crony capitalist and imperialist property and creates a genuine socialist plan based on a democratic national assembly of working peoples' committees and militias!

Forward to a Socialist United States of North Africa and the Middle East!