Revolutions in North Africa and the Middle East: The Permanent Revolution Unfolds! 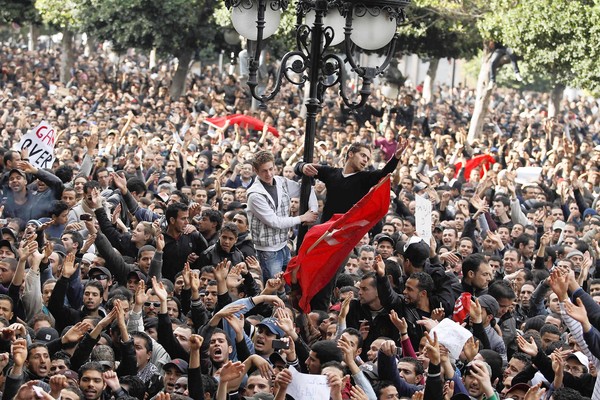 The National Revolution revives
This statement was originally written during the early days of the Tunisian revolt and does not attempt to deal in detail with the quick moving escalation of revolutionary events in Egypt and elsewhere in the Middle East occurring today.
Two and a half years since the onset of the world imperialist crisis, we are seeing a revolutionary development in the Arab world that resembles the generalized revolutionary upsurge that accompanied and followed the final days of WWI.  These uprisings are developing in many countries in the North Africa and the Middle East. In Egypt we see the toilers climb on the tanks hug the soldiers, carry them on their shoulders and ask them for their participation in the revolution.  We saw similar fraternization in Tunisia.
We are not surprised that revolutionary uprisings in which the workers and the impoverished toilers throw themselves bravely against the batons, shields and armored vehicles of the police, are not happening in Europe but rather in North Africa where American and European imperialism has driven down the masses livelihood to nothing; and has, for decades, crushed the inspiration to fight imperialism and the Zionists via the brutal services of the most vicious puppet dictators. Now the masses flow by the tens of thousands into the streets fighting to overthrow the dictatorships installed, armed and defended by imperialism.
The goal of overthrowing these dictators and the class of comprador capitalists with them, expresses the democratic nature of this re-opening of the national democratic revolution.  The masses of North Africa and the Middle East despite their de-colonization struggles have never gone through the experience of bourgeois democracy and its associated illusions (that democratically administered capitalism can provide the greatest good for the most people).

Naturally many of the people in the streets believe that by overthrowing the dictatorships and creating a democracy, under the control of the masses, or with the support of the army, their basic needs will be met. Yet, this “democratic” re-opening of the national revolution will be crushed if it aims only at the creation of a parliamentary democracy and does not develop over into a workers’ revolution spreading across the Arab world and ultimately Europe.
The national and the democratic character of the revolution combine and cannot be separated. Imperialism divided the Arab world into many countries in order to divide and control the masses.  The national question in the Arab world cannot be fully answered unless the revolution becomes international and creates one Arab nation.  This was understood by different left Bonapartist dictators in the region who tried several times to create one unified Arab nation.  The most famous of which was Nasser’s project with the Ba’athist regime in Syria to create an Arab nation from north to south.  The betrayal of this pan-Arab nationalist project of Nasser and the Ba’athists by the national bourgeois lackey’s of imperialism and the Stalinist parties contributed to decades of defeats in the Arab countries and passivity of the masses.
Now the democratic and the national questions are back on the agenda.  This time the masses are the sole driving force behind it.  The events, in Egypt and Tunisia showed that the nationalist pan-Arab unification is not yet a serious concern of the masses.  Their focus today is the economic question. Like in the Russian revolution the demands today are for bread, jobs and the end of the dictatorships who have failed to provide them.  However these economic and democratic aspirations of the masses cannot be resolved by ignoring the national question, since without defeating imperialism these neo-colonies cannot win true national independence.
Therefore in order to succeed, the revolution must be unified across borders and this can be done only if the masses struggle to complete the democratic tasks of the national revolution carries over into the socialist revolution. A revolution that will defeat the imperialists and their agents, not only the dictatorships but the national bourgeoisies in all these countries, and  create a federated socialist Republic of North Africa and the Middle East.  This is the only progressive way to resolve the national question.
Yet since the masses emphasize the question of democracy and their economic conditions, the national question, at the moment, is important only insofar as it encourages the spread of the revolution across borders to make it permanent and socialist.  The economic yoke of imperialism has enriched a small comprador bourgeoisie at the expense of the masses who are now wary of solutions that maintain these elites in power.
Imperialism will seek to resolve this crisis by imposing a democratic façade, either coalitions or ‘patriotic’ popular front governments of ‘national salvation’, with or without Constituent Assemblies, to protect the rights of capitalist property.  In the interim, left Bonapartist officers' coups may arise to manage the transition to ‘democracy’. But ultimately these cannot meet the masses needs and imperialism will, if it is necessary, conspire with the military high command to unleash counter-revolutionary coups to crush the masses as we have seen recently in Honduras.  If local 'democratic' solutions or home grown military solutions are not sufficient to contain the masses, then imperialism will not hesitate to send NATO or Zionists dogs to crush the revolutions.  That is why it is critical for the Palestinians, Syrians, Jordanians, Yemenis, Iraqis etc to join the North African uprisings and unite with the masses to drive imperialism and Zionism out of the Middle East.
The Tunisian Revolution
It’s clear that the Tunisian uprising has sparked off a re-opening of the Arab national democratic revolution. There are now demonstrations going from Algeria to Jordan and the West Bank and Yemen. The massive revolutions erupting throughout the Arab world express the fundamental character and contradictions of the following revolutionary aims:  The struggle for national independence, agricultural reform, control of foreign trade, control of national resources, expansion of workers and poor farmers wages and rights  (relative to those enjoyed under imperialism and neo-colonial dictatorial rule); these are all goals which can be achieved only by the leadership of the working class pushing the struggle on to the  formation of a workers’ state.
These lessons from which the theory of permanent revolution was derived have been played out over and again in countries across the colonial world where the working class has been prevented from taking power into their own hands.  During the post colonial period, in wars and struggles for liberation, a weak comprador bourgeoisie subservient to imperialism came to hold the reins of power, often using revolutionary rhetoric but ultimately acting in the interests of imperialist finance capital and a small homegrown crony capitalist class.  Without the rapid emergence of a revolutionary workers’ party capable of leading the masses to create democratic organs of worker’s power, the consolidation of power in the hands of the counter-revolutionary comprador bourgeois will strangle the revolution.
Today, the Tunisian, the Maghreb and North African working class is faced with the necessity of accomplishing the national and democratic tasks of the bourgeois revolution, which today, can only be done through the formation a workers’ and farmers’ state. The bourgeoisie of Tunisia has proven too weak and too corrupt to carry the revolution against the dictatorship through to full independence from imperialism, neither can they advance and sustain democracy nor overcome the structural constraints imposed by French and US imperialism through the IMF over the decades.  The largest sector of the elite is a crony class in the worst sense.

Researcher Juan Cole reports that 50% of the financial elite are tied to the Ben-Ali family’s financial empire.  The petty bourgeois layer of lawyers and civil servants have taken to the streets, joining the most oppressed who have no faith in the oligarchy or the Ghannouchi interim government. The inability of the local capitalists to liberate the nation places those tasks squarely in the hands of the proletariat which will come to see its own economic liberation as tied to the unfinished tasks of the national revolution of the whole region – the defeat of imperialism and its national bourgeois lackeys.
The driving force in the revolution so far has been the working class, the youth and the unemployed.  Any governmental solution short of a workers’ state will perpetuate the economic crisis because the bourgeoisie has no choice but to maintain subservience to imperialism.  The class character of the uprising and revolutionary process is therefore proletarian.