We are not all Zapatistas! 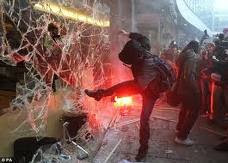 The age old bogey of the left, 'do we need leaders?' has reappeared again (having never gone away) following the massive student protests in the UK. Once again the left is split between those who want to have a 'democratic' victory without Bolsheviks or Communists imposing their 'topdown hierarchy', and those who insist on the party leaders running the show. That we have this debate constantly every time a major spontaneous struggle bursts out just shows how lacking is our understanding of revolutionary history.

There are two kinds of democracy in capitalist society. Bourgeois Democracy and Workers Democracy. Bourgeois democracy arose historically when the bourgeoisie came to power and offered workers the vote to convince them that they were equal citizens to their bosses. A sort of parliamentary front to hide the fact that behind the scenes the bosses organise everything very undemocratically so that Bourgeois Democracy is a front for Bourgeois Dictatorship.  Most on the left understand this consciously or instinctively but at the same time defend Bourgeois Democracy as a life line to freedom to organise, mobilise, and express opposition to mounting bourgeois state repression.

What is not seen in this struggle is that Bourgeois Democracy is the expression of a deepseated bourgeois ideology of individualism that is generated by capitalist production itself. Wage workers have their surplus labour expropriated as surplus value which then takes on the benign appearance of value inherent in commodities. The members of the exploited proletariat become transformed into the isolated bourgeois individuals whose value is equal to the value of the commodities he or she consumes. Such individual consumers are then dignified as citizens who are all 'equal under the law'. Bourgeois Democracy then, is a ideological fiction that represents an inverted, false picture of capitalist class exploitation as the equal rights of citizens.

Necessarily then, opposition to Bourgeois Democracy spontaneously takes the form of a defence of it as a pure or anarchist form of Bourgeois Democracy against its abuse by capitalist elites. Noam Chomsky's huge popularity reflects this standpoint.  If the bosses deny the right of the majority to rule collectively, then the majority asserts that right and real democracy ensues. This is the common underlying anarchist position that we find in all social movements today from the Zapatistas to the recent student protests. If the majority expresses its democratic will bourgeois state power will dissolve. But this democratic will becomes a reactionary utopia because in rejecting the struggle for power it succumbs to it.

The fate of the Zapatistas proves the point. The Zapatistas won the minds of the new left in 1994 but failed to lead it anywhere since then. The result is that such pacificism in the face of the bourgeois state has seen social movements smashed or coopted everywhere. At the end of 2006 the uprising in Oaxaca ended in defeat because it pinned its hopes on mass pacifist protest defeating the armed Mexican state. Meanwhile sub-commandante Marcos was absent touring other parts of Mexico on his motorscooter. The spontaneous resistance of youth using home made rocket launchers and barricades was rejected by the indigenous teachers as futile gesture of resistance to power. Yet the defeat that followed saw all the leaders of the Commune arrested and jailed in other parts of Mexico.

Everywhere it is not passive resistance but armed resistance that reveals the weakness of the ruling class. The Oaxaca youth, the French youth of the Banlieus, the Greek Youth on the streets, and the Council Estate youth who fought back against the cops in London recently, point the way towards the only means of defeating Bourgeois Democracy - Workers Democracy. But in itself spontaneous mass anger and mobilisation on the streets cannot defeat Bourgeois Democracy (Dictatorship). At best it unites masses of individuals in crowds, now formed instantly by means of cell phones and social media. What it lacks is a democratic leadership. The loudest voice or the most bureaucratic party hacks, colonels or subcommandantes can impose an unrepresentative leadership in the absence of true Workers Democracy which Lenin called 'Democratic Centralism'.

Contrary to the bogey language of those who caricature Leninism as 'hierarchy' it is nothing of the kind. Lenin argued as early as 1902 in What is to be Done, that mass spontaneous uprisings could not break with Bourgeois Democracy unless they became class conscious and rejected the false consciousness of bourgeois ideology. Such class consciousness would not emerge politically until the class had fought hard battles on the production line where their power as workers was pitted against the power of the bosses. The tragedy of 1905 in Russia proved this. The industrial struggle would teach workers to unite, form their own organs of power such as soviets or workers councils, and begin the fight to take power. The women workers of the St Petersburg textile mills took this first step in February 1917. Workers Democracy would then become and expression of both the democratic decisions of the workers collectively to act against the ruling class, together with the election of leaders to implement their decisions but who were accountable and recallable by them if they failed in their delegated tasks.

Such revolutionary lessons of history are vital if the world proletariat is going to defeat the bosses crisis today. 2011 will be the year in which the leadership of the workers movements everywhere is contested. The outcome will decide if we win or lose and whether defunct capitalism is swept away or survives to destroy humanity and nature. Against those misleaders who try to keep workers inside the straight-jacket of bourgeois ideology and spontaneous, anarchist actions, we must fight for Workers Democracy, calling for councils of action where workers can unite, organise collectively, debate and decide on courses of action, as well as elect leaders who prove themselves able to lead, or be thrown out and replaced by those who can. Those leaders who succeed will be those who are class conscious and capable of taking the struggle for proletarian world revolution forward to victory.
Posted by Dave Brown at 5:10 PM