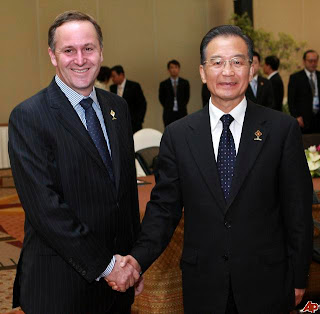 How to defeat NACTs austerity attack

The NACT governments new package of labour reforms is designed to improve 'productivity' and 'create jobs' says John Key. This is the neo-liberal language for increased exploitation of workers under worse conditions to restore profits. Under the new law workers will have fewer rights than they had under the ECA in the 1990s. This is why the CTU has been forced to call for street protests. However, like the social democrats in Greece and Spain, where the EU is imposing tough austerity measures, the CTU will use street protests to try to pressure the Labour Party to the left and defeat the NACTs at the next election. But Labour will not challenge capitalism and imperialism. Its purpose has always been to reconcile workers to capitalism. We say that the working class must organise independently of the Labour Party and fight for a revolutionary party and program to socialise the economy and plan production for need and not profit.

What drives the NACTS?

The NACTs have shifted up a gear to declare an open class war on workers in this country with a series of attacks on work rights (90 days fire at will for all new jobs) beneficiaries (toughening work tests for sickness benefits, DPBs) ACC (denial of sexual abuse counselling) savings (reducing employers Kiwisaver contributions), cuts to health, education, privatisation of social services, tax increases (GST) and so on ad nauseum. The whole point is to force down wages and to cut the social wage to shift more value produced by workers to the bosses and increase their profits.

The rise in violent crime is a direct result of the crisis and the call to arm the police is to up the level of state force to clamp down on workers and suppress refusal of workers to pay for the crisis. It is not a policy option for the NACTS, rural rednecks or bloody minded fascists as some think.

And it certainly can't be fixed by a Labour Government that Sue Bradford is calling for. It is a specific response by the NZ ruling class to the immediate crisis of profitability in the export oriented sectors. Resistance to the NACTs which merely aims to get Labour into government in 2011 will fail miserably as we explain below.

The NACTs represent international capital in NZ facing a serious global crisis of falling profits that is heading for another great depression like the 1930s. NZ is a weak, low-wage semi-colonial producer of bulk commodity exports. Its a price taker and not a price maker in the world market which means that the NZ capitalist class has to drive down the costs of production to get any share of the profits from agriculture, mining, tourism and education etc., that have historically flowed to  British, US, and Australian imperialism. Today that value is increasingly flowing to Chinese imperialism. The national share of profits, wages, taxes and social services in Aotearoa depends on the profits retained from the value of export earnings of these commodities, and today it is the relationship with China that is critical to this distribution of the national income.

To keep the whole economy buoyant the prices for commodity exports (agriculture, tourism, tertiary education etc) have to be held up by increasing demand in these imperialist and other economies. They want cheap milkpowder, cheap ironsands, cheap honeymoons and cheap degrees. This means competing with other semi-colonial exporters by driving down the prices of production including labour costs (fire at will, performance pay for teachers in schools and unis, workfare) environmental costs (gutting the RMA, cutting ETS obligations) and energy costs (privatise water, privatise national parks, foreshore and seabed, make workers subsidise corporations (eg RioTinto-formerly Comalco, electricity, and billions in ETS subsidies).

The opposition to selling land to Chinese corporations and the growing Chinese migrant population reflects this increasing influence. China is the only large dynamic capitalist economy whose rapid growth is so far preventing the global economy going into a complete slump. That is why in the last analysis the NACTs policies are those of a NZ semi-colonial ruling class forced to serve the interests of Chinese imperialism.

Strategy for fight back

Understanding the class enemy then, is the key to fighting back. The NACTs represent a subservient, largely parasitic, NZ ruling class that is becoming the lackey of Chinese imperialism. They have no room to manoever but have to cut production costs to meet the demands of Chinese imperialism. Key signals this when he agreed to joint ventures with Chinese corporations in third countries. He is acting for NZ bosses seeking a stake in the profits from China's ability to super-exploit third world countries. Such pressure to outsource NZ production will grow if costs at home are not cut drastically.

This is the new template that shapes NZ politics. We can call it the Chinese century. Its excludes the possibility of reforms since these raise capital's costs and harm NZ's competitiveness. Whatever the antics of the NZ ruling class they are driven by this necessity. And NZ workers do not have the clout of Chinese workers who are winning higher wages from a very low base. The only alternative for NZ workers is to fight for a socialist Aotearoa.

The make this absolutely clear, by socialism we mean the overthrow of capitalism and its replacement by a socialist, planned economy democratically administered by the working class. We do not mean some fake socialism  which can be won by a 'progressive' bloc between workers and national capitalists benefitting from the relationship with China.  Much of the left models its brand of socialism on market socialist reforms. Parliamentary socialism is the  Standardista brand. The there is the Chinese brand which advocates a form of market socialist state that acts to 'develop' rather than 'colonise' the semi-colonial world. This is the Chavista or Bolivarian brand espoused by the Australian Green Left and local mimics.

We have discussed the danger for workers of these left reformist positions at length elsewhere. We argued that China is no different from the US or EU imperialists in Asia, Africa or Latin America, where it extracts super profits like all imperialist powers, even if its methods differ. We conclude that there is no possibility of the NZ working class being able to follow some imaginary Fabian, Chavist or Chinese road to market socialism.

Therefore, the fight for a socialist Aotearoa is not just against the NACTs, but also against the Labour Party backed by the CTU union bureaucracy which thinks that it can reform capitalism in the new Chinese Century because NZ's relationship with China is 'progessive'.

In its essence the fight for socialism is the not to kowtow to China but to join forces with Chinese workers to fight to expropriate imperialism and the NZ ruling class who are the junior partners of imperialism.

By socialism we mean collective ownership and also collective consumption of value as the product of labour. Nationalisation can become collective property only if workers take control and prevent the privatisation of value as profits (eg stop private mining of national parks). This means defending state owned assets not only from privatisation but also from private appropriation of value by putting them under workers control. This means nationalising under workers control all land and landbased resources, the key sectors of industry, and the banks,  as steps towards socialism.

How do we get there?

The Maori struggle to regain customary ownership of the Foreshore and Seabed is one avenue. It would tie up land and sea-based resources as common property that opens the way to end private profits. However, in itself it does not stop profiteering by corrupt bosses or by capitalist partners (such as Maori held fishing quota in JVs with Japanese corporations).

But we have no confidence in the Maori Party brand of iwi communalism. It would see customary land benefitting iwi capitalists rather than Maori workers. It would copy the Chinese 'Communist Party' capitalists. Land in China is state owned, but the capitalists  are able to make profits from the labour value extracted from workers on that land. To stop this Maori customary land would have to be democratically administered by the majority of Maori workers to ensure that the rent (value) produced was also collectively used to meet the needs of the masses and not the private greed of any class of shareholders. Maori workers have a common interest in this with Chinese workers to socialise nationalised property!

This is the model for the agricultural sector. Here the demand for land nationalisation should not be based on opposition to foreign ownership (the CAFCA and Green Party and some Maori nationalists line) but collective working class ownership which requires class alliances with foreign workers. Agricultural workers would call for a class alliance with working farmers in NZ and poor peasants in China. And since nationalisation in itself does not prevent profiteering, the workers in this sector need to demand land nationalisation under workers and small farmers control.  This would remove the costs of servicing mortages as one major flow of rent from the land to a parasitic class or rentiers. Similarly the attempts by Fonterra to create shares that can be traded on the stock exchange is designed to allow international finance capital to profit from the labour of working dairy farmers.

It is interesting that the NACTs are opening up to Chinese imperialist investment in Agriculture while Alan Hubbard who offers interest-free loans to young farmers is seen as a threat to the profits of the corporates. Hubbard proves that farmers can benefit from their own labour without being mortaged to the big banks. Socialism however, cannot be built on Christian philanthropy. In exchange for land nationalisation farmers would have interest free state loans and access to state R and D to develop their land and retain the product of their labour.

In this situation where NZ's economic role is that of a semi-colony to Chinese imperialism facing a global crisis, no trust can be put in the National or Labour parties that both subordinate workers to the capitalist class and to imperialism. In every sector where the new employment reforms are designed to drive down wages and conditions, such as in agriculture, mining, tourism, education, etc., to allow Chinese and other imperialists to reap super-profits from Aotearoa, workers have to fight for what they need now and not what the local or Chinese capitalists say they can 'afford' to pay.

Jobs for all on a living wage! Reduce hours and share the work. Benefits tied to the living wage! For unions on every jobsite under the control of the membership with recallable delegates! For rank and file control of the unions. For union independence from the state. Break with the union bureaucracy! No sackings under the 90 days act! All for one and one for all! Equal rights for all workers by age, gender, ethnicity, nationality, sexuality! For workers committees and assemblies in every city. For a national Congress of workers assemblies. For a general strike to smash the NACTs austerity program! No to privatisations! For nationalisation of the land and key sectors of the economy under workers control with no compensation!

For a socialist Aotearoa/New Zealand!
Posted by Dave Brown at 10:20 PM