India: Bourgeois Takes to Offensive Amidst Maoist Calls for Reconciliation 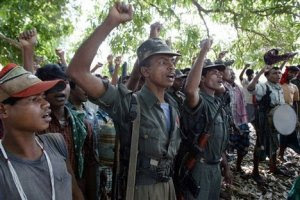 On July 2, the Intelligence agencies of the Centre assisted by the Andhra Police, eliminated one of the top Maoist leader and spokesperson of CPI (Maoist), Cherukuri Rajkumar Azad in the forests of Adilabad, in Andhra Pradesh.

With killing of Azad a major revelation was made. Maoist leadership was negotiating peace in a backroom dialogue with the central government, on the back of its own cadres. The state forces taking advantage of the moment to locate the top Maoist leaders, eliminated one of them.

The dialogue was going on between the Maoist leaders and the Home Minister P. Chidambaram, with mediation of Swami Agnivesh, saffron clad religious leader. Till the time Azad was killed three letters were exchanged between Chidmabaram and Azad through Agnivesh. Swami who led a peace march from May 6-8 between Raipur and Dantewada had initiated the process.

The backroom dialogue between the Maoist leaders and the Central Government came as a surprise for everyone, above all the Maoist cadres and sympathisers. Maoist leaders who were publicly vowing to overturn the state ‘even before 1935’, were in fact seeking peace through negotiations with the government, has come as a bolt from the blue for advocates of Maoist politics. The demands of Maoists were lifting the ban from CPI(Maoist), release of its leaders and cessation of hostilities.

However, as was proved later by killing of Azad, Maoists were under illusions but not the bourgeois state. The Central Government was clear in its view- it never intended to negotiate the politics or power with Maoists. It sought dictatorship for its class, the class of bourgeois and landlords and firmly moved in that direction without any if’s and but’s. It deceived the Maoist leaders only to break their spine.

Long before in our writings, criticising the Maoist politics, we had predicted that sooner than later, Maoist leadership would be longing for a peace deal with the bourgeois, in return for very limited demands. Tribals and rural peasantry, whose interests Maoists echo, cannot wage an irreconciliable struggle on their own against the rule of bourgeois; it vacillates between war and peace with the bourgeois and so its representatives, the Maoists.

It is not only proletariat but many other sections and groups in the society, who are repressed, tortured, humiliated, exploited and ruined by the ruling bourgeois and thus are forced to rise in opposition to the bourgeois rule at one or the other time. But except proletariat, none of these sections is capable either to wage a consistent struggle against the rule of bourgeois on its own, nor they are interested in that. They may liberate themselves from repressive rule of capital only by following the lead of the working class. Tribals and peasantry, to which the Maoists take to, are such social formations.

Peasantry can realise its radical character only by following the lead of urban working class, the only class in history which stands in genuine opposition to the bourgeois and seriously interested in its overturn. But Maoists come to stand at the head of backward sections of peasantry, while turning their back to the working class, and prevent the working class, the advance guard of the revolution, from taking to the leadership of backward mass, especially the peasantry. Forming themselves into bureaucracy under the banner of a party, the Maoist leadership with urban petty bourgeois origins, thus insulates the rural mass from urban working class. It achieves successes to an extent in the times of general defeat and retreat of the working class and is defeated with rising of the proletariat.

Maoists remain tied to bourgeois through so many strings, including the common friends and take to armed struggle merely to force the bourgeois to negotiate a deal with them. This is what we had seen recently in Nepal and more recently in India. They consciously strive for peace with bourgeois in exchange for petty reforms and concessions. Struggle for them is the road to settlement in one form or the other.

Yesterday the Maoists found a progressive bourgeois in Mayawati, and then in Shibu Soren, today they find common friends with Chidamabaram in Swami Agnivesh. Their propaganda glorifies bourgeois democracy, by talking of democracy in abstract form. Instead of addressing the working class to overturn the rule of bourgeois, Maoists appeal to the bourgeois to stick to the norms and standards of bourgeois democracy set by itself. They call for set of rules and even for an umpire in the struggle against the bourgeois.

While bourgeois strives for its exclusive rule, its class dictatorship, Maoists mislead themselves, the workers and the youth and behind them more backward sections of tribals and peasantry with honeyed phrases of democracy, at each step seeking collaboration with bourgeois, to realise this ‘democracy’. The more bourgeois takes to offensive against the working and toiling people, the more Maoists strive for conciliation with it.

Elimination of Azad at the hands of security forces at a time when Maoists were on the verge of entering a ceasefire with the central government , clearly reveals the inherent weakness of political perspective of Maoists, their illusions in democracy and their unrealizable program of ‘new democratic revolution’ as opposed to the proletarian dictatorship. While bourgeois remains clear in its political aim-to maintain its dictatorship- and demonstrates its readiness to whatever is necessary to be done for that, Maoists dupe themselves with sedatives of ‘peace’ and ‘democracy’.

Alike Stalinists, the Maoists are also avowed enemies of the theory of ‘permanent Revolution’. They retain a misdirected faith in two stage theory of the revolution- democracy today, socialism tomorrow. This false notion of democracy for them is the platform for collaboration with the sections of bourgeois. While the united bourgeois continues to crush the working class and toilers, in association with imperialists and landlords, Maoists seek national and progressive sections in the bourgeois to fight against medievalism and imperialism. They seek ways and means to negotiate a peace with ruling bourgeois.

Reprinted from newwave  with permission.
Posted by Dave Brown at 11:09 PM