Socialist Fight: No support for these chauvinist, xenophobic strikes 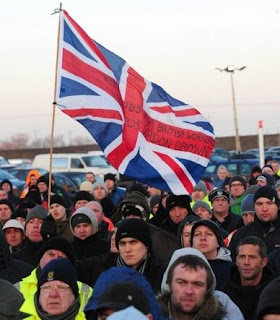 We reprint the leaflet of the British Trotskyist group Socialist Fight opposing the recent strike wave in defence of "British Jobs for British Workers". We publish it in the interests of furthering discussion and debate between our tendencies, though we differ on some aspects of Socialist Fight analysis (see comment below leaflet).

“A trade union led by reactionary fakers organizes a strike against the admission of Negro workers into a certain branch of industry. Shall we support such a shameful strike? Of course not. But let us imagine that the bosses, utilizing the given strike, make an attempt to crush the trade union and to make impossible in general the organized self-defence of the workers. In this case we will defend the trade union as a matter of course in spite of its reactionary leadership.” Trotsky 1939

Socialist Fight (SF) unequivocally opposes the current ‘wildcat’ strikes because they were called on the reactionary basis of ‘British jobs for British workers’ (BJ4BW), it was on this xenophobic basis they were spread, with the assistance of the right wing media and on this basis they were tacitly endorsed by the entire Unite and GMB leaderships. We place the blame for this situation squarely on the backs of the reactionary Labour movement leaders; Gordon Brown and the Labour party leaders for endorsing the reactionary slogan, borrowed from the BNP, the Unite, GMB and other TU leaderships for tacitly endorsing and pursuing negotiations on that basis. A major weight of responsibility also rests on the shoulders of those left groups and organisations, the Communists Party of Britain (CPB), the Socialist Party of England and Wales and others who have acted as left apologists for these bureaucratic misleaders of the working class. When similar demands were made on the French TU leadership they immediately rejected them as reactionary chauvinism and insisted on the demands like ‘we will not pay for the bankers/capitalism’s crisis’.

We reject the compromise of Keith Gibson of the Lindsey strike committee and the SPEW. This does not repudiate the original BJ4BWs demands, which were displayed so openly on the pickets. It is rather a cover for it, hoping we will forget, or close our eyes, to what it is really about. Gibson says that “Stewards and Union Officials asked to meet with IREM a.s.a.p. after Christmas to clarify the proposal i.e. would IREM employ British labour?” Then it explains that the walkout took place when “Shaws’ workforce were told by the Stewards that IREM had stated they would not be employing British labour.” (rb on SU Blog 3 Feb) He admits here that the initial walkout was about the nationality of the workforce, not about wages, conditions or any of the other red herrings he and his apologists have been trying to drag across the trail ever since.

The SP motion, now the property of the strike committee and the mass meeting, but not the property of the Unite leadership – Simpson, Woodley or Jerry Hicks – says “Union controlled registering of unemployed and locally skilled union members, with nominating rights as work becomes available”. That is simply BJ4BWs in another form. We reject the notion that “Union control of hiring is always preferable to the bosses controlling hiring. Enforcing an illegal closed shop would be a massive advance for the working class movement in this country”. On what basis would the union nominate people for jobs? The only issue that may be in question is equal access to jobs, but that is down to the subcontracting system itself, not nationality. When socialist in British trade unions fought discrimination against nationalists in the north of Ireland they were always referred back to the Irish Region (Region 11, Northern Ireland in the case of the TGWU). Here, in the best workers’ traditions, Loyalist craft engineering unions (like we have here), with all the history of privilege and empire loyalty had contempt for other workers and ensured they (nationalists) did not get to join the craft unions and did not get jobs.

Discrimination proceeded swimmingly, all in the name of the best trade union practices, the power of the unions was consolidated and the NI 'troubles' ensued. This ‘union control’ is only a demand for 'local' communalist discrimination; the predecessor of the SPEW in Ireland was quite comfortable with that. And British and Irish based union leaders turned their heads away and pretended they just did not see. In a certain sense this demand is more reactionary than national chauvinism; presumable workers from the south of England, Wales and Scotland, let alone Ireland, would quickly be sent packing by our ‘local’ TU registrar of jobs.

As one comrade said, “But the SPEW states that it is the bosses who are setting one nationality against another. Yes but why play the same game? It is the BNP, say the SPEW, who are attempting to sever fraternal relations between workers from different nations, but the SPEW want union control of a register of locally skilled workers presumably to facilitate local jobs for local people. Some are trying to find socialist gold under this militant dross of nationalism. But that seems like an attempt at alchemy’ (BB). You cannot endorse the strikes and repudiate the aims, they are the same. If you endorse and seek to spread these strikes you are dealing a crippling blow to the British Labour movement.

The Socialist Workers Party (SWP), Workers Power (WP) and SF are not siding with the Gov/bosses. The line-up is clear. The strikes have the enthusiastic support of the BNP, they have the support of the capitalist media, more enthusiastic the more you move to the right. The TU bureaucracy as a whole who would scarcely lift a finger to fight job losses or pay constraints while countless billions are handed over to bankers almost without conditions are enthusiastic supporters of these illegal but highly reactionary strikes.

The CPB, the SPEW and the TU bureaucracy are supporting it for entirely reactionary reasons. The bosses are 'opposed' because that is in their immediate short tern financial interests, but they are not anything like as opposed as they would be if the plant was occupied, and the right of private property was thereby challenged, as in Waterford Glass. The government are 'opposed' but really not like they would oppose a real workers action, in the long term interests of the class as an international whole, like Gate Gourmet. They are for ‘law and order’ and against ‘trouble’ in general but if they have to have ‘trouble’ they could not get better than this from their point of view. Where are the threats to sequestrate the union funds, where are the high court judges injunctions, where are the brutal police attacks? Where is the class consciousness of those who cannot see the difference? And we reject with contempt those backward workerists who say we are siding with the Tories because Kenneth Clarke made an anti-racist statement criticism of the strikers. Tory anti-racism bad, workers racism good, declare these political idiots.

It was entirely correct of the Campaign against Immigration Controls (CAIC) to picket the Unite HQ and SF endorses the action. The prejudices of localist craft trade unionists would have been easily overcome and the strike orientated in a healthy direction if it had got a lead from the top. But Unite gave them their head. Principled socialists would seek to argue and struggle politically with these workers to explain that workers cannot win in national, let alone local isolation. No, we need a rank-and-file movement in the unions to combat this. It is entirely nonsensical to talk of the form being reactionary and the content being revolutionary as if this was some kind of Marxist dialectic.

These are reactionary strikes for reactionary ends which can only win by driving foreign workers out of the country and setting in train the destruction of the entire working class and its organisations and all their historical gains. Fight them now, fight the reactionary leadership of the class who are responsible for this appalling situation or it will get worse. Do not try to find the silver lining; it is not there. They do mean what they say. If they occupied the plant and forged international solidarity that would be an entirely different strike, with entirely different leaders. To pretend otherwise is to defend the existing leaders and to prepare more defeats. This is differentiating the left in Britain; it goes to the core of class politics. Fight the reaction without reservations and you will find new revolutionists who will come forward to champion the interests of the class as an international whole.

In conclusion we quote from an Italian socialist group, the Communist Workers Party, “Our hope is that the SWP may be physically present in the struggle to denounce what is becoming a falsified reality i.e. that by which Great Britain is being occupied by foreigners, and British workers are being forced out of jobs because of them”.
Yours Ottaviano Scipione, PCL-Partito Comunista dei Lavoratori - Italy (Abruzzi Region)

• Occupy to prevent plant closures and job losses!
• For a comprehensive programme of public works, council house and infrastructure building to overcome unemployment!
• The trade unions must take responsibility for organising the unemployed now, before they fall prey to fascism!
• For a militant ‘no platforming’ of fascists combined with United Front demands on workers leaders to fight capitalism AND fascism!
• No to Popular Fronts compromises with capitalism like the Peoples Charter!
• Make the bosses and the bankers pay for the crisis – not the workers!
• For a rigorous progressive taxation system, comprehensive prevention of tax avoidance scams by transnational companies and the rich and a wealth tax to make the capitalists pay for the crisis!
• For a genuine rank-and-file movement in the trade unions to fight the bureaucratic labour lieutenants of capital who lead today’s trade unions!
• For direct employment by all firms of all labour, end the pernicious system of sub-contracting and agency working!
• For an open conference of all those political groups and individuals who oppose these reactionary strikes!
• Build a revolutionary socialist leadership to overthrow capitalism and establish socialism internationally!

----------------------------------------------------
Socialist Fight sees the workers involved in these strikes as "craft workers" while we would see them as part of the "labour aristocracy" that benefits from the privileges of skilled workers who share in some of the super-profits of British imperialism. Labour aristocrats have history of social imperialism supporting their imperialist ruling class in return for the defence of their privileged jobs. It is the breakdown of this historic partnership as British bosses are looking for cheaper EU and other contractors employing non-British workers that explains why these workers took 'wildcat' action. The role of the 'left' bureaucracy of the Communist Party and Socialist Party is to cover the naked chauvinism of British Jobs for British Workers is part of the international left aligned to the World Social Forum and the Bolivarian revolution that brings together Stalinist, Castroists, Maoists and fake Trotskyists. The role of the 'left' bureaucracy is to use the unions to pressure the bourgeois state to the left rather than call for independent unions, occupations, and the general strike. It is the left leg of the Menshevik International aligned to "socialism in the 21st century" that has abandoned Marxism, Leninism, Trotskyism and the "dictatorship of the proletariat".
Posted by Dave Brown at 9:52 PM