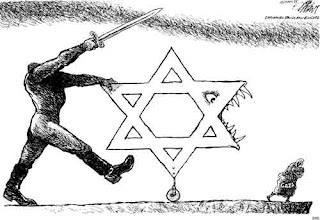 A controversy has blown up in Auckland, Aotearoa, following an attempt to prevent a Symposium run by Uncensored magazine from using the Mt Albert War Memorial Hall. It was claimed on the Reading the Maps blog that the magazine was a forum for anti-Semites and holocaust deniers.

We would say that from the debate that has raged since this claim is true. But our attitude towards anti-Semites is to mobilize workers to shut them up, and if they organize as neo-Nazis like the National Front, support direct working class physical confrontations. Calling on local bodies to ban Uncensored magazine from using a public hall is not the answer.


Only workers can stop fascism

Two problems that have clouded this issue and given ammunition to the anti-Semites are first, using the 'war on fascism' as some justification for denying Uncensored the use of the public hall, and second, appealing to local government to ban the use of the hall.

First, Reading the Maps is challenging those that claim that the holocaust is a myth by using a more dangerous myth, that the Second World War as a 'war on fascism' was just and defensible. It’s more dangerous, because if workers had rejected that war as imperialist, German fascism could not have made the holocaust.

This provides the anti-Semites with an argument in defence of their bourgeois democratic right of free speech as defended by the 'war on fascism'.

But the war on fascism was an inter-imperialist war between capitalist ruling classes that tragically sucked millions of workers into giving their lives for their ruling classes instead of turning their guns on their bosses.

Second, combating fascism and anti-Semitism is the task of the only class that has an interest in defeating it, the working class, and not of the state, even in the form of local government, whose interests are to defend private property, and hence the rule of capitalists, Nazi or Zionist.

This is the basis of Trotsky's refusal to call on the capitalist state to ban fascists. The fascists were openly calling on the smashing of the workers movement, and the state was in league with the fascist paramilitaries. Hence it was necessary for workers to organize their own ban, i.e. the 'no platforming' of fascists i.e. denial of right to free speech. So in Aotearoa, the national front is met on the streets with counter-demonstrations. And the neo-Nazis conferences should be disrupted by working class protests and their own counter-rallies and demonstrations.

Anti-Zionism is not anti-Semitism

But a more immediate danger exists. By calling on the state to ban the ‘neo-Nazis’ for being anti-Semitic, the liberal left lets the Zionists off the hook. The neo-Nazis attempt to portray their anti-Semitism as anti-Zionism. So when they attack Zionism by questioning the holocaust more than 60 years ago, the liberal left ends up coming to the defence of Zionism. We explain here why this lets the Zionists off the hook and betrays the Palestinian struggle for inde-pendence.

It is true that this is popularly held to be the main justification for the existence of Israel. But this is a misreading of Zionism which argues for the right of Israel to exist on the basis of the Bible, not the holocaust. The holocaust (and the history of pogroms) was a reason used by Zionists to claim that Jews could not be assimilated in Europe and needed their own state.

Trotsky agreed that this was a legitimate national right for the oppressed Jewish people. But he did not agree that that state could be in Palestine unless it was with the consent of the Palestinians. To impose the state of Israel by force onto the Palestinians would be a travesty of the Jews right to self-determination because it denied the same right to the Palestinians.
Denying the holocaust happened, then, is a defence of Nazism against the charge of genocide against Jews. This is at the same time a denial of not only the right of Israel to exist, but an open attack on the national rights of Jews as ‘specially’ oppressed.

For those who oppose the neo-Nazis, the holocaust can become an article of faith in the right of Israel to exist in Palestine. Zionism then becomes a legitimate national movement. One can oppose Israel’s occupation of Palestine but at the same time hold it has a right to exist by 'agreement' with the Palestinians. This is the basis of the "two-state" solution. Those who oppose Israel’s right to exist become by this logic anti-Semitic.

The CWG agrees that the holocaust did happen. But that it does not justify the existence of Israel in Palestine; nor does the Bible. In believing that we are not anti-Semites but revolutionary socialists.

Nothing justifies the establishment of a settler state on the land of another nation (even in formation as Palestine was fighting Britain which held it as a mandate of the League of Nations) and its occupation and ethnic cleansing by terrorist militias.

The Jews in Europe were victimized by the Nazis and we do not dispute that about 6 million died. But the Zionists who occupied Palestine in turn victimized the Palestinians using similar methods to the Nazis. The Palestinian dead since the 1930s would be well in excess of one million.

Fascism is an extreme reactionary rule on the part of the national bourgeoisie that responds to the threat of socialist revolution by uniting the nation on the basis of myths of racial superiority in order to smash the revolution. The myth of the pure race fuels the repression and physical extermination of not only Jews but other races or oppressed groups and minorities: criminals, Roma, homosexuals, communists etc.

The Nazis were fearful that the German workers would rise up and make a socialist revolution. Jewish workers were overrepresented in the leadership of the communist and socialist organisations. By agreeing with the Nazis that Jews could not be assimilated in Europe the Zionists collaborated with the Nazis to smash the labor movement and made agreements to release a number of Jewish workers to be shipped to Palestine.

Against the Zionist state

In Israel, the Zionists used semi-fascist methods to impose their reactionary rule on the Palestinian workers who rose up in 1936 in a six month general strike, and in the years up to 1939, when there was a continuous uprising of the Palestinian people against the Zionist settler state in formation.

Zionism then, created a semi-fascist settler state regime to establish and defend its existence on stolen Palestinian land, facing the continuous resistance of the Palestinian people and therefore the ongoing threat of a Palestinian national or socialist revolution.

Thus Zionism far from being a victim of the Nazi holocaust visited on Jews in Europe, collaborated with the Nazi movement to divide workers along racist lines, weakening their resistance to fascism, and then using the same methods in Israel against the Palestinians.

The Zionists claim that those who oppose Israel's right to exist in Palestine are anti-Semitic. For fear of being called anti-Semites or even neo-Nazis the liberal left does not challenge the Israeli state's right to exist.

Neo-fascism in Aotearoa is fueled by the free pass the liberal left gives to the Zionists in Israel today. The only way out of this trap is to fight for the destruction of Israel as a Zionist state, and at the same time fight for the rights of Jews to self-determination within a free, democratic, secular, socialist Palestine.