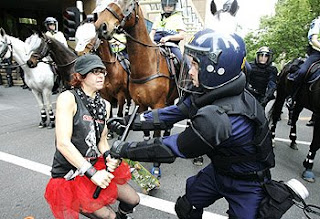 • Down with Economic Nationalism, Bj4Bw and “No2 EU” Europhobia!

• Build a Rank-and-File organisation that fights the bosses and the class treachery of the TU bureaucracy!


The G20 summit demonstrates the rapidity with which the crisis is unfolding. Whole economies like Iceland and Ireland are virtually bankrupt, financial meltdown has unleashed economic meltdown and no one can say where it will end. And the political ramifications for the left are equally rapid. The Lindsey Oil Refinery strikes were the August 4th for the British working class. Those like the SP and CPB who gave them enthusiastic support have now got their reward.

The Stalinists of the CPB, who have been the traditional bagmen for the class traitors of the TU bureaucracy, have welcomed the ‘Trotskyist’ SP into the fold of economic nationalism. Fronted by Bob Crow, with no consultation with his members, the new No2 EU platform is a straight British nationalist response which attempts to steal the votes of the UKIP. Like the infamous ‘foreigners out’ demonstration in Staythorp this appalling political treachery has struck fear into every immigrant worker and much of the black and Asian community. If even ’lefts’ like Simpson, Crow, Nellist and the CPB are prepared to tack so far right for opportunist gains how can we defeat the BNP?

But divisions are not really so bad if they reveal reality in time to fight back. The SWP has swung to the left after the split with Galloway and is now recruiting rapidly on leftist demands. Despite all the problems with their own capitulation to trade union bureaucracies and the popular frontism of the UAF, etc. their members are demanding a real fight now and revolutionists should give critical support as far as they go.

The future of the working class and poor, particularly immigrants, is indeed grim and they will be joined by a vast section of the middle class who will be rapidly driven down into their ranks. A year or so ago every right-wing think-thank in the planet trumpeted low taxation, deregulation and privatisation as the neo-liberal model that lead to robust economic growth.

The number of millionaires and billionaires burgeoned but this was necessary so the poor could benefit from some trickle-down, or ‘crumbs from the master’s table’ as one patronising bigot put it long ago. Today we are encouraged to hate these greedy bankers and fat cat finance capitalists but not the system itself, which the People’s Charter assures us is reformable.

The anarchist answer is to defend localism; local communities defending jobs and fighting the oppressive state is the only way. What is wrong with British jobs for British workers, Irish jobs for Irish workers and local jobs for local workers? Down with the EU, back to fortress Britain? But the door is then opened for the far right; economic nationalism is the field of operation of the fascists, it ties the workers to the bosses and must destroy the very basis of working class consciousness, its internationalism and its objective need to produce wealth on the basis of a world planned economy. Workers are the true global class whose interests can only be truly served by a planned world economy, capitalism is a global system run by a national bourgeoisie who are only interested in the own profit.

Revolutionary Trotskyism must provide the answer then with its aspiration for the world revolution. If the Waterford Crystal occupation becomes fashionable then the sacred right of private property, which underpins all global oppression, will be raised again as an international tactic. Only when private property is overthrown and collective, effective human rights are established and when we produce food and manufactures for human need, not profit can workers begin the struggle for international socialism. We must sweep away the ‘muck of ages’, sexism, homophobia and economic nationalism which leads to racism, wars and copper fastens all human oppression.

But we cannot do it effectively when we collaborate with a TU bureaucracy which seeks to jail militant Belfast Airport shop stewards. We cannot do it when we go on marches with Lindsey Oil Refinery strikers who shout ‘foreigners out’. Just as we must not capitulate to the trade union bureaucracy we cannot circumvent them either by ‘base unions’, we must fight and defeat them to reclaim the unions as class struggle organs.

Internationalists will then see their aspirations as real possibilities; no local answers, no trade union bureaucratic sell-out deals to save capitalism; occupy, organise and strike to unite the working class nationally and internationally, then the revolutionary struggles will begin in earnest.

Down with No2 EU, workers of the world unite!