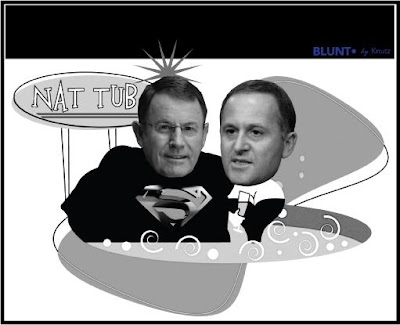 
NACT government forcing workers to pay for their big profits

The NACTs [National Party and ACT party - with Maori party in tow] are using the election for the Supercity Council as a test bed for their agenda to make the workers pay for their crisis in the 2011 General Election. The new unified Supercity will have around half the population in NZ so it is the dynamo around which the whole country spins. The bosses want to win over Auckland as a step to winning over the whole country to their new right 'austerity' agenda.

This so-called 'austerity' means that workers suffer a cut in their living standards so that the bosses can improve theirs. It is a gigantic redistribution of income from poor to rich on top of the fact that workers ultimately create all of the nation's wealth.

The global capitalist crisis has hit the profits of the business class hard, and the capitalists want workers to bail them out by working harder in worse conditions. Not only does their system fail as the big banks go bust but they prove that they also control the state in forcing the state bailouts to rescue big business. All of this puts the cost of the bosses' crisis on to the backs of workers for as long as they are prepared to put up with it.

The NACT Government  has already introduced a number of austerity measures including cuts in employer contribution to Kiwisaver, introduction of legal temporary work, keeping the minimum wage and wages in general below the rate of inflation, tax cuts to the rich and GST (consumption tax) rises for the poor etc. Accompanying the tax cuts for the bosses is cuts in funding for the welfare state including caps on health and education spending. This will turn public health and public education into the private perks of the rich. This will mean a cut in living standards to most workers and a further widening of the income gap.

The NACTs plan to go down to the next level such as cutting benefits and driving beneficiaries into shitty jobs to force down wages further. Invalids will be redefined as sick or preferably workshy and work tested to force them to take these shitty jobs. Solo parents will have to look for part-time work when their youngest child reaches the age of six years.

The Minister of Social Development has said she wants to privatise welfare by making workers set up their own social insurance schemes. She says that work is good for beneficiaries health.  Perhaps she has rediscovered that work makes you free. She has created a task force to cut welfare which includes rightwingnuts and private contractors to welfare services. We can see where this is headed with the funding of Whanau Ora to farm out welfare services for Maori to private contractors, and the $5 million contracted to the Pacific Economic Development Agency run by National Party cronies.

This will kill two birds with one stone, getting people to work for less pay and less benefits, and creating new profits for NACTs contract provider mates. Cuts in social welfare will mean workers facing poverty and misery and increased sickness as spending cuts in health services leading to early deaths and less of a drain on the bosses' profits. Health Boards are already closing important services like youth psychiatric care to balance their budgets, and those denied access to ACC couselling for sexual abuse are driven to suicide.

All of this is 'austerity' to balance the budget is dressed up as the fight against welfare 'dependency' and dole bludging. The working class is being divided into a supposed 'undeserving underclass' that lives off the taxes of hard working 'deserving' kiwis. The bosses hope that if we fight among ourselves to scramble out of the junk heap we will not notice that they are real welfare dependents.

If we look harder we don't see an 'underclass' living it up on its welfare 'entitlements', we see an 'overclass' living it up on its 'entitlement' to expenses and profits in blind trusts flowing from NACT policies. What is more all of business profits come from the labour of the working class in the first place. This fact never seems to enter into the bosses calculations because to admit it would be to identify themselves are the real bludgers on the nation.

This is what this charade about the underclass is all about. It tries to hide the fact that the corporate welfare cheats are laughing all the way to the bank with their millions. John Key the NZ Prime Minister is a classic case. A multimillionaire from illgained earnings from currency speculation. An investor in dairying, winemaking, mining, property development, and formerly Tranz Rail. He and his business mates run the NACTs in the interest of making more profits from public asset grabs and insider trading. Meanwhile the sideshow of Benie bashing is designed to force them into shitty work to lower labour costs and encourage profitable investment in 'new jobs' and 'economic growth' in the 'national interest' of the NACTs.

In what 'national interest' you might ask? Well there's plenty of scope. Just ask the NACT PM and cabinet ministers who all seem to have blind trusts in potential pots of gold in them there Conservation estates, Canterbury water, agriculture and horticulture, not to mention property deals and ministerial expense rorts. For example, Key, Creech, Carter and the like all have interests in Canterbury dairying and are like a new squatter class grabbing water rights and polluting the drinking water of Canterbury workers, while PM Key fatuously brags about his JK brand of wine.

Like the NACTs abolition of the democratically elected Canterbury Regional Council to allow the thousands of dairy farmers to squat on scarce water rights, the new Auckland Supercity will open the way to grab its public resources and distribute them to the parasitic cabinet ministers and their mates in big business and property development.

NACTs plans to privatise the remaining state assets in this country, starting with Auckland assets, all $28 Billion of water, transport, port, Airport etc that remain in public hands. While the NACTs claim to be putting off privatisation until a second term after the 2011 election, they are already signing up private corporations to run Auckland water for 35 years and talking of private sharholding in Kiwi Bank and SEOs like Energy.

They say this will allow the 'mums and dads' to invest in public assets and so put demands on the management to be more efficient and so make more profits in order to pay good dividends. The same thinking underlies the deal on the Foreshore and Seabed that will allow Iwi Corporations to launch business ventures in the name of 'customary ownership'. The NACTS say this has just got to be good for NZ. Well, yes, NZ Inc owned and controlled by big business.

But in reality opening up shares in SEOs or contracting out provision of state funded services is just the Trojan horse approach to a wholesale sell-off of public assets to international bankers and pension funds or Multinational providers who already own and control most of the former public assets.

Unlike Rogernomics of the 1980s and 1990s however, when the working class was caught out by a Labour Government rushing through a massive privatisation agenda, this time round workers are less gullible. The NACTs arrogance in openly ripping off these assets has already drawn big protests over the theft of Auckland, mining and water rights.

Working people have to put up a huge fight to stop NACT from winning the Supercity and easing their way to a 2011 election victory. But to do this we have to know what is at stake and why a class war is the only solution.

Its easy to see how the NACTs are lining up to grab Auckland. John Banks heads a list of rightwing NACT candidates for the new Council. The left is as yet not putting up a serious fight. Len Brown has come out in opposition to the sale of public assets but only because there has been no referendum on the sales. But even this poses a threat to a NACT victory, so the dirty tricks brigade is in full swing to destroy Len Brown. That is not helped by Len Brown's naivety and his weak campaign organisers.


Brown's campaign is pissweak. The polls since the 1980s have shown that the majority of NZers, most of whom work for a living, do not want further asset sales. In fact they opposed the earlier sales and would probably favour re-nationalisation. The polls also show that a majority are angry at the theft of Auckland.

Brown needs to have the courage to stand on this popular discontent over assets and the huge resentment that the NACTs are taking over Auckland in an anti-democratic coup.

Unfortunately Brown's weakness is a reflection of the compromised Labour Party that got defeated at the last election because it had forgotten its South and West Auckland working class heartland. They didnt vote for Key, they stayed home.

Brown will not win the Supercity unless the working class fighters in the Labour ranks, in particular the unions,  take over the campaign and rally these working class stalwarts behind a fighting campaign for democracy and public ownership and control of Auckland assets.

The working class majority in Auckland need to rally around a strong left campaign to defeat the NACTs and the profiteers and banksters who run this  government.

They need a working class agenda. Not only opposition to all public asset sales, but the return of all privatised assets to public ownership. The private multinational hucksters like Infratil, Veolia, etc etc need to be thrown out, and transport, energy, roading, water, etc all put under a new Regional Council to which the Community Committees elect their representatives.

These local representatives would would be elected to act on strict mandates from their voters and be thrown out if they vote against their mandates, so that the working class majority in Auckland would control the running of the city.

A victory for the working class in Auckland would provide a big boost to democracy and a platform for a strong campaign behind a revived Labour Party that openly stands for the interests of the working class.

Failing a victory in Auckland, the task of defeating the NACTs will be that much more difficult, but at least a layer of political fighters will be already mobilised to take on the NACTs and their ruling class backers.
Posted by Dave Brown at 4:23 PM