Foxconn: Capitalism in a nutshell 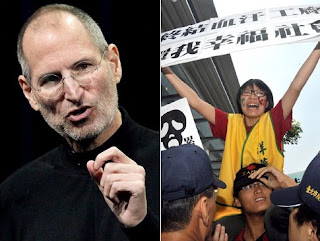 Here we have the biggest mass manufacturer of cellphones, ipods and ipads in the world. It tells us most of what we need to know about capitalism. At one end are the MNCs that design and contract out the production of new media hardware such as Apple and HP. Their profit margins are 27% and 9.6% respectively.

At the other end are young Chinese workers many teenagers who normally work 12 (but sometimes 16, 24 or even 34 hour) shifts.

They are paid much less than the lowest paid unskilled worker in the US or Europe - US$132 per month according to Bloomberg. The workers are no more than cogs in a massive machine and do dehumanised, repetitive work with 10 minute breaks every 2 hours. 10 have committed suicide this year already many more have died from overwork or suspicious circumstances in the last few years.

When the scandal of the suicides first came to public attention months ago they were ignored and brushed aside. Now the full scale horror of a spate of suicides has attracted the attention of Steve Jobs CEO of Apple who expressed his concern by stating that Foxconn was no “sweatshop”. Well, a Chinese reporter went undercover to work at Foxconn and is now blogging and Twittering to tell us the real truth.

This tells us all we need to know about Capitalism today. In order to make a profit in selling media hardware devices, the MNCs like Apple, Sony and HP try to get the biggest profit margin they can. This means using cheap, skilled and pliable labor, working long hours for low pay. China is ideal because it has a huge surplus of cheap labour migrating from rural areas to these sweatshops. This brings down the cost of the finished iphone or ipad and increases sales.

But the cost to the workers is a “meaningless” life as one Foxconn worker puts it. Life is not only meaningless because of mindless, repetitive work, actually ‘sweated labor’, but workers have their labor expropriated by Apple or HP in the value of the hardware devices as their capital, so that the workers end up worth no more than the value of their miserable wage. Their value in society is reduced to the value of their labour power (they don’t see the surplus value that becomes their bosses profits) set by the market.

Marx called this exploitative social relation of production between labour and capital one of alienated labor. Capital exists only by ‘alienating’ (i.e. expropriating) the labor of the working class. That's the way the capitalist profit system works.

Marxists have only one message for Steve Jobs and his class of superexploiters. An Apple a day costs a life today. In order for us to live your profit system must die. We say to all exploited and oppressed workers: kill capitalism, not yourself. Organise, strike, occupy and socialise capitalist property so that it becomes collective property and is used to produce for need and not profit!