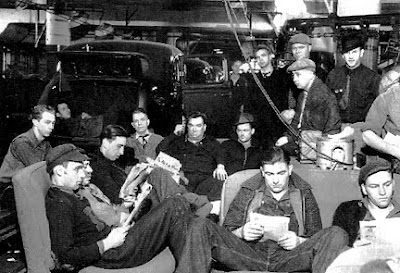 UAW Sitdown Strike at Flint, Michigan 1937
Feb 12: NUMMI union leaders orchestrated an event with Democratic politicians and other unions tops from the AFL-CIO, Teamsters, CWA, and AFSCME who gathered in Fremont, California (Trumka appeared via video)  to put the final nail in the coffin of the NUMMI worker’s fight to save their jobs and ultimately to sell out up to 50,000 jobs in California.  These sell out union mis-leaders came together to prove to the capitalist politicians they still intend to deliver votes despite layoffs and plant closures!
These dues sucking hacks paraded the capitalist politicians on stage while they chased union militants from the parking lot for calling for militant actions such as plant occupations.  The back room deal making UAW tops have canceled membership meetings and instead put on this show to prove to the politicians that they can still be counted on to keep a lid on the workers anger about the piss-ass severance pay 14k-40k for years of work.
Then they wrap themselves in the American flag and turn this fight into a chauvinist movement of the “victimized” American workers facing down the “mean” Japanese of Toyota who “lost their way” with out saying one word about GM who ran the factory for decades before their failed joint venture with Toyota went south.  Not one word about the failed bail out of the auto industry.  Not one word about the methods which built the UAW in the first place such as factory occupations. Not one word about Nationalization of the industry under workers control. Instead they turn what should be industrial working class battle for jobs into a consumer boycott of Toyota products.
Right now the only way to save the plant is a full on labor battle using the only power we still have, the power to seize the factory and mobilize labor nationwide and internationally for solidarity actions.  But these clowns in their kaki pants and UAW polo shirts have no plan to win.  It is totally disingenuous to arguer that a boycott can win in a period when workers can’t afford cars in the first place.  Those who can afford cars do not respect picket lines (in front of dealerships or factories) and those who do respect picket lines can not afford cars!
To no surprise fake socialist leader BL. of the mis-named Voz de Trabajadors, American section of the Morenoite LIT, have tail ended the bureaucracy with a promise to support this consumer boycott project in any way they can* (maybe they should change their name to Voz de la Burocracia).  Some one should tell the Morenoite International we have enough reformists and renegade Trotskyists in the USA you could have kept this lot of poorly trained reformists and sent us some real communists instead (but alas your organization is buried so deep up the kazoo of the bureaucracy that you don’t know up from down in the class struggle) and real communists run from your organization as fast as they can.
Counter to the rotten no win strategy of the LIT and the UAW the militants of the HWRS point to the factory occupations in Argentina in 2001, the Chicago Republic Windows and Doors action in 2008, and the massive factory occupations which consolidated the power of the UAW in the 1930’s.
The HWRS brought this message to the workers of NUMMI:
Organize a Rank and File Occupation Committee to Occupy the NUMMI Plant!
The bosses are about to lay off all NUMMI workers with severance pay that will not last very long. The question is, to whom does the NUMMI plant belong: to the brutal capitalists of Toyota and GM, who made huge profits off the workers’ sweat and blood, or to the workers themselves, who are the ones who produce the cars? The workers at Republic Windows and Doors workers showed us the way: When a company wants to cut its losses and run, it can be stopped only if the workers occupy the plant. Workers have also occupied many abandoned factories in Argentina and elsewhere, in some cases turning them into productive factories run by and for the workers themselves.
The UAW rank-and-file had a long tradition of sit-ins and factory occupations in the 1930s. But today, the union bureaucrats only collaborate with the capitalists and their government, as they collect their fat paychecks and leave the workers out in the cold and on the streets.
Trumka did not and will not lift a finger to save a single job. He is just coming to town to make few militant noises and leave the workers with nowhere to turn on April 1st. He has the power to call for and initiate massive strikes and walkouts in solidarity with NUMMI workers, which is also the only way to stop future massive layoffs and plant closures. But he proposes to do exactly nothing to save your jobs. The UAW bureaucracy is not any better. They just recently forced GM workers to accept massive concessions, which include closures of many GM plants and layoffs in the thousands. If NUMMI workers take action, they will not be alone.
Only the rank-and-file workers can change the situation. We need to set up a rank-and-file occupation committee as soon as possible, so that we can make a plan to occupy the plant before everybody is too demoralized and it’s too late.
NUMMI Belongs to the Workers, Not the Capitalists!
Form Rank-And-File Action Committees to Occupy the Plant!
Occupy the Plant and Refuse to Leave Until All Jobs are Saved!
Nationalize Toyota Without Compensation
and Run It Under Workers’ Control!
And that is why the UAW hacks chased us out of the worker’s hall yesterday!