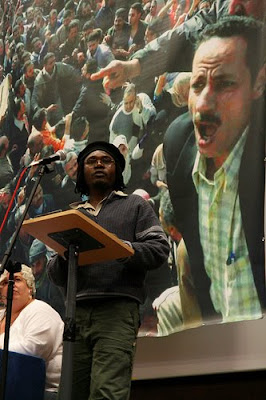 THE CASE IN WHICH ISOZ leadership is being charged with 'unlawful entry and theft' from our own offices was finally brought to court on the 19th of November 2009 at the Harare Magistrate court. The accused leadership of ISOZ coming out of custody on bail namely Mutero (National Co-ordinator) , Rera (NationalTreasurer) and Lovemore (Youth Coordinator). The complainant, deposed renegade socialist Munyaradzi Gwisai did not turn up and instead send his proxy Michael Sozinyu [also known as Mike Sambo - seen picture] being represented by the infamous Chinamasa and Chinamasa Legal Practitioners.

Commencing the hearing the state though indicating its preparedness for a trial requested for postponement of the trial due to reasons best known by them. The 7th of December 2009 was set down as the next trial date. However the prosecutor acting on the instructions of the complainant demanded that the accused be remanded in custody. However the magistrate ruled in favour of an option for bail. The state demanded a bail fee of USD500-00 each with stringent bail conditions. However the presiding magistrate upon pleas from the accused reduced the bail amount to USD50-00 with minimum bail conditions.

As we stated before, the criminal case is a cover up for the political wrangle that has engulfed ISOZ following the historic election of November 2008 which ushered a new leadership. The deposed leadership led by Gwisai orchestrated political sabotage within ISOZ that culminated 4 days in prison of the elected leaders.

As if this is not enough Gwisai and clique ignored our proposal to have the matter brought out of the court and be dealt with an independent tribunal constituted by workers’ organisations. Their (Gwisai) lawyer was quoted on the sidelines stating that he has strict instructions to pursue the case to its logical conclusion within the bourgeois framework.

Gwisai has clearly transformed from being a half-hearted socialist to being an openly anti-working people state agent, hence his appointment as the deputy chairperson of the land sub-committee of the Constitutional reform currently under way in Zimbabwe. For long, many especially the workers and other disadvantaged groups like the HIV/AIDs have had faith in Gwisai but recent developments has shown that Gwisai is indeed a socialist by word only.

What is more telling is the fact of being represented by Patrick Chinamasa’s law firm. Chinamasa one of the key architects and defenders of the brutal and oppressive ZANU (PF) and government machinery is a sworn enemy to democratic change in Zimbabwe, regionally and internationally. Gwisai's lawyer said quite cleary that he can only enter into negotiations if the accused plead guilty. Stalin would have been proud of him.

The case is thus unfolding as an alliance between the IST and Zanu-PF against the members of the ISOZ. To date, not a single group of the IST has come out in defence of the proletarian principle that disputes among us are not dealt with in the bourgeois courts.

This is particularly telling in that at the very moment, the ZCTU leadership are in prison for the mere holding of a so-called unauthorised meeting; MDC and community activists are disappearing, and Gwisai and the IST (because Gwisai still is listed on the SWP-Britain website as their contact in Zimbabwe) wants to put activists from the IS into the Mugabe Gulag.

The Green Left Weekly and others who are supposedly hosting a Socialist conference in January, and who regularly host Gwisai, are silent on the matter, the SWP-Britain maintain a deafening silence.

Quite clearly this is an agenda to eliminate and liquidate, just what Stalin did in Russia, the revolutionary organisation and other progressive movements in Zimbabwe.

We THEREFORE call upon all working class movements in Zimbabwe, regionally and internationally to condemn and disassociates themselves from dealing with Gwisai and clique. They have proved beyond any reasonable doubt that they are class traitors. They are on the payroll of the secret state machinery, so workers beware. For more information please read our November / December 2009 Socialist Worker edition.

In the meantime we invite all those agreeable to our cause to sign a petition which we will be circulating and to come and witness Gwisai testifying against democracy on the 7th December 2009 at Rotten Row Court 4 at 0830 in the morning. We are aiming for 10 000 signatures locally and abroad.

We have said before and we say it again, we want the information of the organization to get out of state hands as soon as possible. When we said that the equipment could go to a mutually acceptable third party, Gwisai rejected this, thus allowing tthe equipment to still be in the hands of the state. As we said before, the equipment can even be held in the hands of Gwisai temporarily, while a body such as IST Africa (or any other body in the workers movement that is not allied to the state, decides on who the equipment should go to. For us the most important is that the equipment, even at this late stage gets out of the hands of the state, but what we are not prepared to do, is to admit guilt on the matter as Gwisai is trying to force on us.

The calling of an International Moral tribune is crucial, especially now that the Trade Union Central of Bolivia has come out in support of the proletarian principle of not using the courts and in favour of a tribune. The trbunal will have only one agenda point: to hear the case against Gwisai, for the use of bourgeois courts in a dispute in our ranks.

We give our final appeal to the IST to intervene in the withdrawing of charges against us; otherwise it seems that they will also be called before the International Moral Tribune for having allowed activists, and from the own ranks at that, to disappear into the gulag of Mugabe, one of the most notorious dictatorships in the world. The IST will have to answer for their alliance with zanu-pf against their own rank and file. If not a single member of the IST has come forward n our defence, then we can reach only one conclusion, that we are in the wrong organization. The world proletariat awaits the answer from Gwisai and the IST.

Down with Bourgeois Mentality