Zimbabwe: Open letter to Gwisai and the entire IS tendency- URGENT 31.10.09 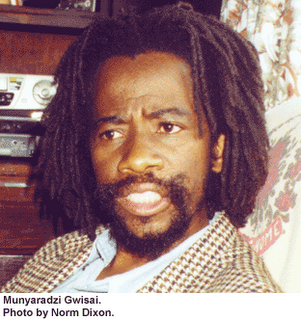 It has come to our attention that you have laid a criminal charge against 3 fellow ISO-Zimbabwe members for allegedly forcible entry into the ISOZ office and for theft of ISOZ equipment. We call on you to immediately withdraw such charges as clearly the dispute is within the ranks of the proletariat and thus deserves proletarian methods to resolve it and not the bourgeois courts.

We urge the entire IS tendency to intervene to prevent activists from being subjected to the notorious jails of the Zanu-PF-MDC regime. The criminal case comes up before the bourgeois courts on Monday 2 Nov 2009 so your intervention is urgently required.

The first queston we would like to pose to Gwisai and the entire IS tendency is why members are denied access to their own office in the first place? Surely members have that basic right to enter and to use their own equipment. Such office and equipment are the collective property of the ISOZ, so why are members denied the use of the office and the equipment?
Secondly, the intention of those ISOZ members who took the equipment was to use it for advancing the collective interests of the proletariat, it was not for private use or for private gain. How can this be theft? (even in the bourgeois sense). Why does Gwisai now claim in front of the bourgeois courts that the office and the equipment were part of the private property of his own law firm? Why does he allow that the secret information (on the computers) of the ISOZ be so easily handed over to the hated intelligence services of Zimbabwe?

This forces us to believe that the real fight is over deeper political differences that we outline below:

1. For years a group within the ISOZ has been raising criticisms of the subjugation of the ISOZ to entryism into the MDC and thus to its politics. This compromising of the revolutionary programme to long term entryism into a reformist party is similar in essence to the subjugation of the SWP to the petty bourgeois coalition, Respect, as well as the subjugation of the SWP to the Labour Party in Britain. This criticism by this group in ISOZ was itself not consistent and has only reached decisive shape in October this year by the declaration of this group to adopt a campaign to expose the bourgeois fraud of the Constitution-making process;This is the ISOZ grouping around Mutero;

2. The dominant grouping, until Nov 2008, was the grouping around Gwisai, which has long defended the entryism into the MDC, stood as MDC parliamentarian, and has tied itself to a bourgeois constitutional approach to the struggle in Zimbabwe. [From the beginning the MDC has had representatives from the bourgeoisie in its ranks and thus was at no stage even a workers' party];

3. In November 2008 at a Congress supervised by members of the IS tendency from South Africa and Botswana, Mutero was elected as national co-ordinator along with a new leadership. A struggle ensued between the 2 factions, which, while it took administrative form, was underpinned by the different political positions- proletarian (Mutero) versus petty bourgeois(Gwisai).

4. Gwisai was accused of changing the password on the email in order to monopolise correspondence. The National Co-ordinating Committee of ISOZ expelled Gwisai for this after having found him guilty.

5. A faction meeting on 18 January 2009 convened by Gwisai 'overturned' the decision. This was purely to provide an organizational platform for the candidature of Gwisai to be chair of the pro-imperialist Zimbabwe Social Forum. From this platform Gwisai is now the deputy chair of the subcommittee on land of the bourgeois Constitution-making process which is being convened by the pro-imperialist coalition government of the MDC-Zanu-PF.

This meeting also 'expelled' most of the leadership that had been elected at the 2008 Congress, that were grouped around Mutero. Under the cover of this expulsion, the rank and file members who wanted to carry on the serious fight of opposing the betrayals in the Constitution-making process, were denied access to their own office. After repeated pleas for the organizational equipment to be returned to the office and to be made available for use by the members, the Gwisai faction continued the lockout. The members forced their way into the office and took posession of their equipment. [The massive Marxist library which members are denied access to until today, is still in the home of Gwisai]. Gwisai laid a criminal charge of forcible entry and theft of possessions of the ISOZ, with the police. The police now have the office equipment. Three, including Mutero, of the large group of members who gained entry into their own office, have been charged and without funds, face the prospect of being jailed in Zimbabwe's notorious prison system.

1. The International Leninist Trotskyist Fraction calls for the immediate dropping of charges against the 3 members of the ISOZ;

2. We call for the immediate composition of an International Moral Tribune, comprised of members who believe that disputes among the proletariat cannot be resolved in bourgeois courts, to hear Gwisai and to carry out proletarian justice against him for his betrayal of working class principles.

Forward to proletarian justice!
Down with the use of the bourgeois courts to settle disputes among revolutionaries!

With regard to the allegations that Claire Ceruti (of the IS group Keep Left in South Africa) raised with us telephonically on 1.11.09:

WIVL, FLTI or any worker with a minimal class conscience must declare oneself immediately when a current which claims to be socialist denounces another current and puts it in the hands of the bourgeois State; it does not matter in what part of the world we live or wherever we are, since workers do not have frontiers but only chains to be broken. Thus we do not accept your question as to why we are involved in issues in .

Evidently you from the IS Tendency from South Africa (Keep Left) are accustomed to mixing the political discussions with moral discussions (when you make allegations against Adonia and others without a shred of proof); and that method is foreign to the elemental class principles, for us this is the method of Stalinism and the labor bureaucracy within the workers movement.

You tell Gwisai, or whomsoever is sending you, if he condemns or not those methods that are foreign to working class principles; and if he is willing to present the proof about what he says, in an International Moral Tribune, so that an institution of our class judges the issues, as it is correct between organizations that claim to belong to the working class.

If Gwisai does not provide the proof and withdraw the case from bourgeois court, you, Keep Left, part of the same IS tendency of Gwisai, will be accomplices of this.