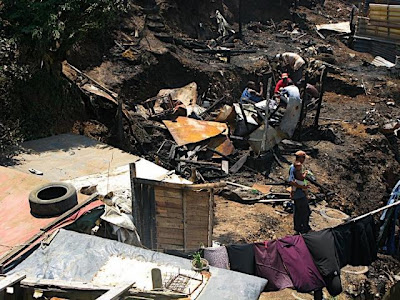 Workers International Vanguard League condemns in the strongest possible terms the brutal killing of activists in the Kennedy road settlement in Durban on Sat 26.09.09. From the reports it emerges that the police are siding with the attackers, who came armed with guns and pangas, in the middle of the night and who burnt shacks of many people.

It is also of concern that these attacks come in the wake of threats from the local ANC leadership to kill some of the Abahlali baseMjondolo activists in the area. In the past election campaign, the ANC made the call for street committees to be set up. What has emerged are armed gangs who claim to act in the name of 'now is the time for the amazulu'. When imperialism has no way out to defeat the working class when it is in crisis, it, as a last resort, plays the fascist card. are we seeing this phenomenon emerging in SA?

Each time when the working class is rising up and getting organised against its own exploitation and oppression, the imperialists devise a strategy to weaken and destroy such an independent movement. In 1985- 1994, the imperialists, through agencies like Anglo American, armed and paid gangs to defeat and attack the resistance movement. last year at the height of the revolutionary crisis in Zimbabwe, lower ranking leaders of the ANC fanned the flames of violence against African refugees; now we have the violence in Kwazulunatal re-emerging.

The only ones who benefits from attacks on the working class is imperialism-capitalism. As we have been saying all along, the ANC regime is none other but its agent. The actions of the organs of the state against the very ones who were attacked prove this, yet again.

The working class needs to draw the lessons from these attacks and draw them quickly- our very lives depend on this.