Historic defeat for the SACP at the Cosatu Congress- 27.09.09 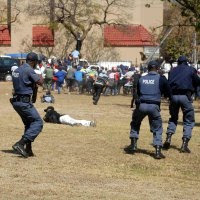 Monday, 28 September, 2009 8:47:52 AM
The objective reality of the working class impacted on the Cosatu Congress to deal the SACP with a major defeat (the first in a long time). The SACP in Cabinet voted unanimously with the nationalists that they support the mass dismissal of soldiers as well as for the smashing of their unions. The workers at the Congress united and unanimously rejected this proposal. The very lives of many workers, having been shot at and brutalised by the regime during strikes and protests over the last period, have taught workers that we need unions in every sector as a first point of defence against the capitalists-imperialists.

Capitalist crisis has forced together the forces of the bosses within the workers movement to openly side with the capitalists and to refuse to organise resistance, to allow high food prices and mass retrenchment to go unchallenged. Workers adopted a fighting programme but made a crucial error to return to office the very ones who will now drag their feet over the programme and who will do everything in their power to delay and water down the demands of the masses. The failure to adopt a call for a general strike for an emergency workers' plan is another limitation. Nevertheless, the basis has been laid for the start of a fightback by the working class. Now we need to draw the lesson up to the end of the class role of the SACP and of the need for working class independence.

It is not only labour brokers who are the problem but the very system of capitalism.

Forward to a workers summit of all unions, unemployed representatives and soldiers to adopt a programme of action to impliment an emergency plan for the working class!

Forward to a general strike to defend the lives of the working class from the capitalist-imperialist attacks!

Down the regime who conciliates with the imperialists to keep the working class in starvation and slavery!

Forward to a workers' government!
Forward to Socialism!