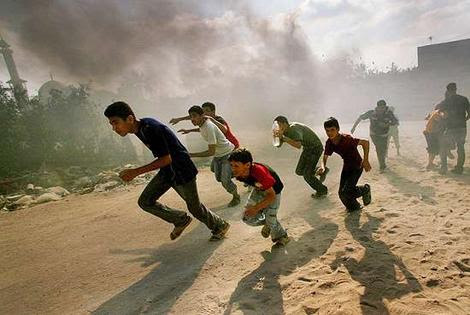 Topnews photo
Statement of the Revolutionary Communist International Tendency (RCIT), 15.11.2012,www.thecommunists.net
1. The Israeli state has again launched on 14th November a murderous wave of airstrikes and rocket attacks against the Palestinian people in Gaza. In the first 24 hours they have already killed at least 15 Palestinians – including several children and a pregnant woman – and injured more than 150. These numbers are rising every hour. Among the dead is also Ahmed al-Jabari, head of Ezzedine al-Qassam Brigades (Hamas’ military wing).

3. While the Israeli state is the killer, it couldn’t do this dirty job without the decades-long support from Western imperialism. It could not even exist without the massive military and financial aid, which it receives every year from the Western Great Powers (e.g. Israel is the No. 1 among the recipients of U.S. foreign aid). Israel gets this support because it is acolonial settler-state which acts as a watchdog of the US and European imperialist interests in the Middle East.

4. The international workers movement and all progressive organizations must rally to the support of the Palestinian people who heroically defend themselves against the Israeli killing machine. We need solidarity actions all over the world – demonstrations, strikes, direct actions against Israeli and US symbols, boycott actions etc. The RCIT calls for:

5. The RCIT supports the national liberation struggle of the Palestinian people. That is why in the struggle between the Palestinians and the Israeli state we are on the side of theformer – despite our absolute rejection of the bourgeois and petty-bourgeois forces at the forefront of these struggles (like Hamas). All Palestinians must have the right to return to their homeland. Likewise, the land grab must be reversed and the Palestinians must get their land returned. The return of the displaced people of course means that the Palestinians will constitute the majority of the population.

6. We therefore reject the existence of a Jewish state in Palestine because it can only exist as long as the expulsion of the Palestinians continues to exist. We reject a “two-state solution”. This would deny the Palestinians the right of return. Likewise, a Palestinian state in the West Bank and Gaza would be reduced to a Bantustan, a dependent de-facto colony of the much richer and more powerful Israel. The State of Israel must be destroyed and be replaced by a secular, Arab-Jewish workers’ republic in the whole of Palestine. In such a state, the Palestinians and the Jews, who accept the elimination of the privileges of the apartheid state of Israel, can live together equally and peacefully. We combine this perspective with the struggle for a socialist federation of the people in the Middle East.

7. The RCIT condemns all those reformist forces (like most left-wing social democrats and ex-Stalinist parties) which criticize equally Israel and “terrorist organizations” like Hamas, which defend the right of existence for Israel (including centrists like the CWI) or which refuse to support the Palestinian resistance because it is led by petty-bourgeois Islamist forces like Hamas (including many other centrist groups based in the Western world like the IMT or the British AWL). Of course, revolutionary socialists don’t share an inch of the political goals of thepetty-bourgeois leaderships of Hamas. However only a fool or a servant of imperialism can deny that this is a war between an oppressor state (Israel) and an oppressed people – the Palestinians! The Palestinians fight for their right to live and exist! Any left-wing organization which stands aside in this war, which refuses to support the struggle of the Palestinian resistance under its existing leadership against the Israeli aggression, under the pretext of secular democracy or socialism, betrays exactly such democratic and socialist principles!

8. While we support the heroic struggle of the Palestinian fighters of Hamas, Islamic Jihad and other resistance organizations, we warn against any illusion in the petty-bourgeois leaderships of these organizations. The working class in Palestine and internationally need their independent fighting party for socialism. Forward in building a revolutionary workers party as part of a Fifth International based on a revolutionary program! Long live international solidarity!

International Secretariat of the RCIT

The above statement is endorsed by the Liaison Committee of Communists 15/11/12
With one reservation the LCC supports the formation of a new workers International based on the programatic conquests of the 1938 Transitional Program but does not call for a Fifth International.